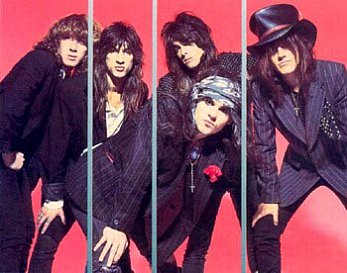 The press didn't rate them at the time, they had a solid and loyal following of largely uncool fans, and they themselves seemed to take it all as a joke. It was only rock'n'roll, but they liked it.

My friends either didn't know of them and didn't care to, or did and hated them.

They were the Quireboys and we met in a London rehearsal studio in the early Nineties.

At the time they favoured long scarves, eyeliner, leopard skin, top hats and high boots, cigarettes and alcohol. My recollection is I had drink with a couple of them later and their rehearsal space was near or in Brewery Lane. That seemed to sum them up.

When I entered the room they were in full flight, jamming and rocking like they were Rod and the Faces in a stadium and not a band in a smelly room half the size of a squash court. The song stumbled to a close and the singer Spike delivered a note perfect Rod Stewart line "I love ya honey" as one of the lead guitarists called Guy (there were two, Guy Bailey and Guy Griffin) whipped out a couple of pure Keith Richard chords.

They fell about laughing and Spike said "We should call it Hot Dice" referring to the Stones Tumbling Dice and Rod's Hot Legs.

"Tumbling Legs you mean," said someone else and we all fell about laughing.

I liked 'em immediately and they liked me. We were all in on the same joke.

Later Spike told me things had been tough when they worked on building sites and would turn up straight from a gig and the after party. They'd still be wearing their leather trousers, make-up, scarves and pirate headbands. They took a bit of stick for that. They'd actually been called the Queerboys at the time and they didn't help either.

What I didn't know until later was at the time they were managed by Sharon Osbourne. They gave the impression of not being managed at all or worse, unmanageable.

They'd already had their time in the spotlight with the release of their debut album A Bit of What You Fancy in '90 and had toured relentlessly. They were road hardened, party baptised and loving it. They had become the Stones/Faces of their dreams.

It didn't last though.

By the time I caught up with them the first wave of grunge had arrived and goodtime drunken party music like the Quireboys delivered (with ballads of course) was being pushed aside by powerchord angst. They'd already replaced their drummer (not the first line-up change, and the list of former members became legion) and they sensed their time might be brief. 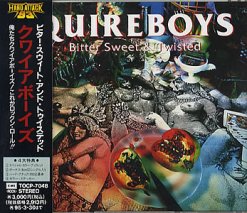 But they were good natured and laughed a lot, and then drank a bit more. The title of their next album though, the one they were rehearsing when I met them, was telling: Bitter Sweet and Twisted.

They had briefly played some of the biggest and best gigs on the planet: Monsters of Rock at Donington, opening for the Stones and Guns N'Roses . . .

It was all over too fast though and when I came back to New Zealand and was going to write up my story they already seemed dated. I did write it and a guy from the record company enjoyed reading it. He called me and laughed. "You liked them?"

I don't think their record company put much energy into Bitter Sweet and Twisted. They broke up shortly after its release.

Of course you could never have accused them of originality but they reveled in the fact that Spike was compared to Rod and the Guys playing to Keith's. That, they thought, was the point. I think the track Debbie on the album might have been borne of Hot Dice/Tumbling Legs. Or it might have been My Saint Jude.

My understanding is they reformed in the mid Nineties -- and they are still out there, although there is only Spike and one of the Guys left of the band I saw.

It seemed sad to me that the Black Crowes arrived at exactly the same time and by mixing in a bit of Americana -- which the Quireboys could never do -- would end up being world beaters by being another band who stole the Faces sound. Hates to Please on Bitter Sweet and Twisted could be the Black Crowes.

In late 2009 some of the Quireboys attended the Classic Rock Awards. Spike and Griff were interviewed by the BBC and said the past year was one of the best they'd had, it was the 20th anniversary of A Bit of What You Fancy. Spike was wearing a pirate headscarf and eyeliner.

On the night they sat at the same table as Mott the Hoople who won the "comeback of the year" award. The Quireboys played a set of covers at the after-party.

Those two things seemed to sum it up.

I can guess what they might have played at that party. And I think I'd have still liked them.

I caught The Quireboys live in Edinburgh in 2005 and they were in good form and had a reasonable turn out. Think it was just Spike and Guy Griffin from the original line up.