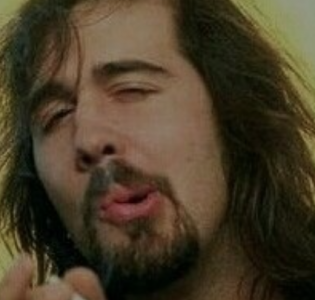 Some people just aren't that smart. At least that's what I thought about Nirvana bassist Krist Novoselic when he tossed his bass high in the air at an MTV awards show and failed to catch it on its way back down.

It hit him on the nose (see clip below) and he was felled in a pool of blood.

I met some people who were in the green room backstage at those awards and they said everyone (and you can guess they were Famous Rock Stars) was watching on the screens.

When Novoselic went down on the stage there was real concern and gasps of horror -- and then when he struggled to his feet they all burst out laughing like schoolkids.

Of course when he came staggering past they all fell in to a concerned silence, until he lurched off and then they . . .

Well, you would too.

Novoselic was interesting when I spoke to him in 1992 at the height of fame, but my low opinion was confirmed when I heard his post-Nirvana career move with Yva Las Vegas as Sweet 75.

Their album was incomprehensible rubbish which lurched from faux-country to bad lounge, some songs in Spanish (she was described as a lesbian Joan Jett from South America) and . . . 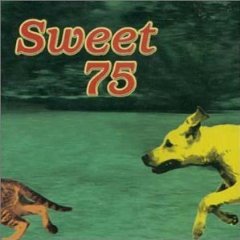 I was going to throw it away -- and then I had a phoner with Novoselic and Las Vegas.

It was late '97 and they were opening for Sky Cries Mary (a more mismatched coupling I couldn't imagine) and Novoselic said stupid things, only to be outdone by Las Vegas who at one point offered this gem when I was trying to get them to explain their hopless album to me.

"There's no perspective. People used to think the Beatles were too hard, you know? It doesn't really matter. Whatever. That's what I have to say. Whatever."

The Beatles, too hard?

Novoselic also informed me -- in what I described as "the langour of a man who has just woken up" -- that, "Like, we're, like true alternative bands, because my thing is that the only real alternative bands are bands that aren't being promoted.

"So people who come to our shows are the people who don't, like, have to be spoon-fed. Like, they don't read magazines or listen to radio to decide what music they like."

He explained he meant in the States where they have been deemed "an art band or an experimental band".

Well, not all experiments are a success and this one wasn't. Sweet 75 lasted a remarkably short time, thank God.

I never understood why they kept mentioning that they "didn't want to pollute our music with perspectives" or that "it just doesn't matter" or "whatever".

I could get they were just trying to have fun -- Lord, the man deserved it after Nirvana - but they also kept banging on about them being "an art band" which I concluded meant the record wasn't selling.

I guess that's what happens when you make a shit album and don't bother to promote it. Whatever. Like. It just doesn't matter. Whatever.

I did have to tell him that the album wasn't "going ballistic" overseas because I'd checked the sales figures. He didn't much, like, like that.

But then again, I didn't much like their stupid music, or them come to think of it.

To be fair, more recently Novoselic has got into politics and is very active.

His book Of Grunge and Government: Let's Fix This Broken Democracy of '04 got some good reviews.

Many more than the godawful Sweet 75 ever had.

Maybe he's found his natural home. Smarter now than then, that's for sure.

As long as he, like, doesn't stand under a falling bass guitar.