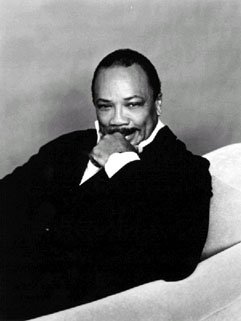 So there I was at the urinal when Quincy Jones walks and says, "Hi Graham". It was awkward to shake his hand so I just nodded and asked him if he was enjoying his evening. Now Quincy -- who famously said "You can't shine shit", but that was before boy bands and Dido -- didn't get where he is by being rude, so said he was having a fine time.

I can't remember why the man who worked with Miles Davis and produced Michael Jackson's only decent albums was in New Zealand, but it might have been to talk up his star-heavy Back on the Block album which was one of those attempts to weave bebop with hip-hop and was ultimately worthy but dull.

Anyway Q -- as everyone calls him apparently, except me who thought "sir" more appropriate -- was in Auckland for a day and I was given 20 minutes of his valuable time, the only interviewer to get him.

It was nerve-wracking experience to be honest. After all this was man who had walked with giants: Davis, Ray Charles, Jesse Jackson, Dizzy Gillespie, Ella, Sarah and a hundred others.

So where do you start? I needn't have worried. As I arrived outside his suite I was met by an elderly award-winning photographer from the Herald who was there to shoot the profile shot then scarper and leave me to it. However on hearing that Jones was something of a gourmet, said he wondered if he'd ever had toheroa.

"Toheroa?" I said quizzically just as the door opened and we were ushered in.

Q was as cool and debonair as expected and I introduced the photographer, who immediately said he'd heard Q was something of a foodie and had he ever had toheroa?

Q was of course fascinated and my lensman was only to happy to extol the many and varied virtues of the almost extinct shellfish. I tried to get a word in and steer the conversation toward something of the musical variety but my snapperman was persistent and offering recipes for soups and salads incorporating toheroa. I could feel the clock ticking in the hairs on my neck and I tried again. Five minutes -- a quarter of my strictly allocated time -- had gone when the photographer announced with great triumph that of course Q couldn't try this local delicacy because the shellfish beds had been shut for years to allow them to replenish.

The conversation came to an abrupt halt and finally I gained a confused Q's attention. After he'd shaking off a sense of absolute bewilderment at what had just happened there followed an excellent if condensed conversation which roved from Davis to Jacko, who was conspicuously absent from Back on the Block.

There had been a well-publicised falling out but Q's line was that the head of CBS Walter Yetnikoff had advised Jackson off the project. He was being polite, and you don't get to be Quincy Jones without impeccable manners.

He joked about Richard Pryor telling him about the size of New Zealand trout and added that he considered eating a religion. I glared at my photographer who was just about to butt in again.

And so the truncated time in Q's company flew past. I went back to the office fuming about the photographer and vowed never to work with him again (I never did) and told everyone I could about the toheroa incident which, by that time, had become faintly absurd and by the end of the day genuinely funny.

That night there was a function where Q was the guest of honour. Unfortunately someone took it into their head that this was an opportunity to showcase local talent in that slightly desperate way we have. The local talent was Annie Crummer who sang a long song and then an even longer one, and then another. It was an embarrassingly dreadful example of vocal gymnastic designed to impress a man who had worked with Sarah Vaughan.

I was down the back but could see Q's eyes glazing over after the first two songs.

It was unbearably tedious. And so as soon as she finished I slipped off to the toilet.

And it was there I met Q again, who addressed me by name.

And that, I thought, is what separates Q from the rest of the men and boys. That, and impeccable manners I reckon.

MY photographer? As in Mick Jagger introducing Charlie Watts as "my drummer"?
I was lucky enough to sit in on a failed press conference for Joni Mitchell in Auckland. The only others there were jazz critic Peter Thomson - I was his chauffeur - an idiot from a Waiheke hippie paper, and an elderly photographer from the Herald. After an intense, verbose hour in which Joni talked - and sang - about music, politics and everything else, the photographer stood up and said, "Sorry Miss Mitchell, I have to go cover the racing now. Before I came here I didn't know who you were. But this has been the most fascinating hour of my career."