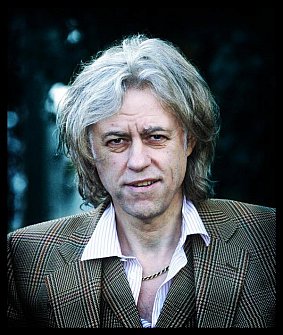 It is sometimes easy to forget -- and you suspect at times he does too -- but Bob Geldof is actually a musician. He was in musician mode when he came to town in April 91 because he'd released an album called The Vegetarians of Love which had enjoyed favourable reviews --- but suffered from abysmal sales.

And so Bob was out on the road flogging it off via interviews with long lines of people ready and willing to sit down with this man who was a legend in his own lifetime.

I met him at his record company offices at 9.45am and hed already done two radio interviews.

I asked him how he was.

"Fooked," he said, and then offered that he had a gruelling schedule and yes, he did mind.

He didn't say this with any personal animosity towards me, but the record company people scuttled away pretty quick. But he acknowledged straight away that this was the life he'd bought into so there was no use complaining about it. Although he did.

He'd come to Kiwiland by an odd route. He'd been offered four weeks hosting a radio drive-time slot in Perth and he took it because it got him and the family out of winter in Britain ("They paid for the wife and kids too, they're having a bloody great time") and so he just carried on travelling to talk up the album.

"I arrived here last night," he said, "and your radio is just fooking dire."

What interviewers learned at their peril and very quickly is that Bob was now on rock'n'roll duty and if you asked him questions about famine and Ethiopia you'd get a blunt response.

Having written an autobiography and been interviewed by the biggest and best for the past 15 years there was little that wasn't known about Geldof so any interview was more about the man's attitudes than his opinions. He wasn't short on opinions of course and he had turned conversation into an art form.

He liked the idea that his high profile could get him into anybody's party and that generally he got the thumbs-up from people.

But there was also a downside.

"I don't know what people want of me. Boomtown Bob? Band Aid Bob? Saint Bob or Sir Bob? Or The Wall Bob or the Book Bob? No matter what you do you see disappointment in people.

"They're instantly crushed so you can't worry about it.. You just get on with it."

What he got on with was talking about the album, some damning comments about the Clash whose music had been sold onto a Levis ad, and contemporary rock which is "all this overwrought singing, huge guitars and cathedral echo which passes for passion these days".

He made terrific copy (my story ran in the Saturday Weekend section not the music pages) and he was on television, radio and elsewhere.

About a month later I saw someone from the record company and asked if Geldof's sudden high profile here had done anything for album sales of The Vegetarians of Love.