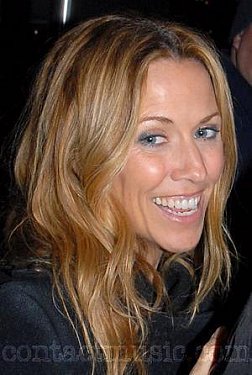 For many years in the States doors would open for me when I said, "Hi, I'm Chris. I'm with the band".

Apparently I look like a "Chris" and with long hair I guess it seemed feasible I might be somehow "with the band".

But this ploy worked more often than not, and so through I would go, into media conferences, backstage sometimes, to where they kept the food and beer . . .

My former partner also observed -- with humour, not cruelty -- that I also looked like an Afghan, that sad-eyed dog which also has a large nose and long hair framing its face.

So I was amused to the point of choking with laughter while sitting in the lobby of a small New York hotel one day when the clerk approached me and asked, "Excuse me sir, are you with the Afghan Whigs?"

Apparently they were staying in the hotel -- but it wasn't them I was there to see.

It was Sheryl Crow who at that time was just about to go Really Really Big on the back of her impressive debut album Tuesday Night Music Club. This must have been in early '94.

I'd heard the album just before I left New Zealand to spend some time in New York chasing a few interviews and such, and asked if I could get an interview. It was easy. Not too many people were pursuing her, despite her having been picked as one of the new faces to watch in Rolling Stone. At that time no one was taking Rolling Stone as seriously as they did in the 70s.

But the album was terrific and so I was told -- via fax to my extremely modest downtown pit -- to be at her Lower West Side hotel one cool morning. She was in town to record a Conan O'Brien Show that afternoon.

So there I was; Chris from the Afghan Whigs, waiting in the lobby.

When I met her I told her about the clerk mistaking me for an Afghan Whig, and what my partner had said about me. She laughed like a drain and we talked dogs, she travelled with her labrador-greyhound cross called Scotty.

We hit it off very well, but this was before she had done hundreds of interviews, and of course she was flattered that someone from New Zealand had not only heard her music but had taken the time out to want to interview her.

She was smaller and less college-girl pretty than her photographs had suggested, and was genuinely surprised by the success of her album which had been a slow grower but had by then sold close to half a million coipies. (It eventually sold in excess of seven million.)

We went to a coffee shop just around the corner from her hotel and I was impressed she not only had her own money but insisted on paying for both of us.

What came up as she became more comfortable was that her father had been an alcoholic, and she also talked about sexual harrassment.

She was walking a very fine line in such an unguarded moment and I told her as much.

She said that her family lived in a small town and she wanted to be protective of them but she was involved in a dilemma.

"Much of my make-up revolves around the fact that my father was an alcoholic. But do I tell the world that? It's something I have to resolve before I record again."

There was much more of a very personal nature revealed and I said it would be easy for the media, myself included, to banner the headline about her background, and that she should think carefully about what she wanted to say in this regard.

So we talked even more.

That afternoon I went with her to the taping of the Conan O'Brien Show (she was superb) and then some weeks later came home with a bag full of interviews which included Bill Laswell, Joe Henderson, Dennis Leary and many others.

Sheryl Crow went on the back-burner. Then the album really took off.

At the time I wrote up the story for the Herald it had sold a million and she was bopping about on stage with the Stones.

Well down the article I buried the fact that her dad had been an alcoholic, it seemed kind of incidental and I felt that most of the other things she had said in that hour -- about singing back-up with Michael Jackson on a tour, her love of Tom Waits, Bob Dylan, Elvis Costello and others -- were actually more pertinent.

But I did mention it briefly, not feeling that in my sensitive handling of it that I had betrayed a confidence.

But I did wonder about it, and whether I should have mentioned it at all.

A month or so later Sheryl Crow came out with The Big Announcement and it was everywhere, it even looked like she wouldn't shut up about it -- although I guess that impression may have come from how the writers chose to profile the fact. But it did seem for a while it was the only thing anyone wanted to talk to her about.

Someone later -- a journalist with more killer instinct than me -- berated me and said I should have gone straight to the Rolling Stone offices when I was in New York and sold them the exclusive.

I dunno. I didn't. I can live with that.

Oddly enough a few years later a New Zealand musician did much the same, told me a private story in the course of an interview which I said I wouldn't publish because I didn't think they had thought through the consequences for them or their family.

They rang me later to say thanks -- and then blabbed about it to a woman's magazine.

My partner at the time said the reason these women spoke so intimately to me was because I was a good listener and had a trusting face. She meant it as a compliment but all I could think was, "What, like a sad-eyed Afghan hound?"

Sheryl seems to be a mystery or a paradox in many ways. This must be part of her persona. Her passion and determination to stand up for and help others on issues she believes is quite amazing. One gets the feeling like so many rockers that they live almost double lives in conflict with what they really believe and what they give to the world through their media projected images. She always makes a comment here or there to keep us guessing. She seems to have taken a bigger chance and gone out on a limb when she went issues oriented through the Detours album. The fact that her father may have been an alcoholic must have been found by Graham in a moment weakness. I'm a big fan of Sheryl Crow, but I always get the feeling I really don't know who she really is.