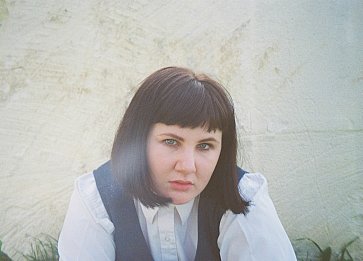 Put simply, this is an album about my friends, focused on my friends and my relationships with them. My intention was to write an album that was focused on something other than my family, so I decided on the name My Friends before I’d even written any of the songs in order to pull my writing into the subject.

I initially hoped the album was going to be really light, cute and wholesome.

This album is a huge step up for me production-wise too, and I’ve learnt a lot since my first record. We recorded this over the period of a couple of months with Ben Edwards and it was an incredible experience.

It’s a little opening track, and I wanted it to be like opening the title page of a story book. It’s like a half song that is a sweet introduction and a soothing self-talk, telling myself that I am loved by friends. My husband made me a book called ‘I Am Loved’ for my birthday a few years ago and he got lots of my friends to write a paragraph encouraging me, so that when I have a bad day I can pull out the book and know that I have a lot of people who care about me.

My husband and I have been together for 7 years, and I love him so much. We have an amazing friendship and love for each other. This album is called ‘My Friends’ so obviously I had to write a song about my number one. It’s an ultra happy bop about how much I love my husband, and how far we’ve come and how precious our relationship is to me. It’s a very straightforward walkthrough of some of the early stages of our relationship, like watching Adam Sandler movies, him driving me home so I didn’t have to take the bus. It’s probably one of the few songs of mine that doesn’t really get too deep into metaphors but just sits very happily at face value.

The first incarnation of The Bench was written on my couch. I wanted to make something with crazy high energy by experimenting with key changes to add intensity and it totally worked. The verse chords/melody just fell out and as usual I got addicted to playing it, singing it in the shower, humming it at the supermarket etc. The song has a sort of charming rage boiling inside of it. All of my bad experiences and frustrations with boys needed a constructive outlet, and this song is it.

I wrote this song during lockdown 2020. My mental health issues seem to be never ending, and throughout the years I have seen it become ‘too much’ for people. I think we owe it to each other as human beings to care for one another though. This song is about slowing down and taking the time to walk with people when they’re struggling. There are two ‘hearts’ on this album - a warm one and a cold one - this song feels like the golden, warm heart to me.

This song feels to me like being out in space - there’s no gravity. I really love this song. It’s about a beautiful friendship of two people who have been really hurt by the world, and so have great empathy and a deep care for each other. But then also they have so many bruises that it’s hard to maintain a relationship.

This song is bonkers and a wild journey in its own right. It’s my wee magnum opus, and the cold, damaged heart at the centre of my album. I started and finished writing Pudding and Pie while camping in Tōtaranui, along with a lot of the album actually. I was in the process of separating myself from a once close friend that ended up being a really toxic presence in my life. While it was really cathartic to write this semi-diss-track, it helped me organise my thoughts and bring closure to a very confusing and damaging relationship. I think this song is the longest because the torture this person put me through meant there was so much emotional fuel to burn and so much to say.

My Hands Are Made of Glass

This song is me at my lowest. I love people so much but sometimes I hurt them and it makes me want to lock myself away so I can’t hurt anyone anymore. I wanted the strings to sound like fingers on a chalkboard, screeching up and down. The peak of the song feels like inner chaos incarnate. This song also has a drum machine, programmed by my friend Lukas (pickle darling) I’ve never used one in my music before but having it sit as a layer underneath the song helps make it more cold and disconnected.

Whenever I Can (I’ll Be There)
This is about a friend who has been in my life since I was 12, and really the only person who’s still in my life from before I was 18. And because of the amount of loss that I have experienced, being able to have his friendship as a constant throughout the years means so much to me.

The meaning of this song has changed a lot since I first wrote it and I don’t really know to describe it now. We recorded it a billion times because Terry and I did the guitar and vocal together at the start, in one take from top to bottom. It took so long to get it right, but I’m really happy with the end result.