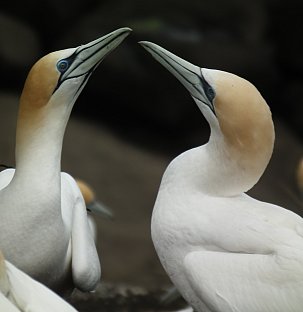 Everybody knows about the gannet colony at Cape Kidnappers: it’s famous for sure, but far from most urban centres and off the beaten tourist track.

Not so, the less well-known colony at Muriwai Beach close to Auckland: it’s only 40 kms and 35 minutes from Queen Street.

We discovered it at the tailfeather end of Northland round trip in December: from Devonport to Te Reinga, up the wealthy yacht-infested East Coast and down south again via the Hokianga and the Kaipara, often bleak areas with manifest signs of rural poverty – but magnificent.

To Maori, this divebombing missile of a bird is the takapu, a gannet to us and a booby to the Americans: whatever you call it, when it dives down at 145kph to seize fish spied from high above, it is supremely equipped to turn magically from pelagic seabird into harpoon, submarine and torpedo all in an instant.

Striking the water at a speed that would kill you or me – it’s like cutting through concrete at that velocity – they raid their fish larder in the swirling waters where local surfers wait for waves. They began by colonising an offshore island, Motutara, and having nested there and thrived, an excess of settlers moved camp to a rock pillar close to shore. Like the wealthy landowners who settled high places and sea views after displacing Maori over on the east coast and elsewhere, they like the best real estate, near to a supermarket.

Pretty windswept and cool in winter, but the gannets don’t care: the air and the sea are their true elements; the land is just for resting up and breeding. Having bred on the rock pillar, they’ve now moved onshore, slowly but surely taking over more and more of the craggy headland where tourists and travellers like us come to see them, up close and very personal.

The beauty of the Muriwai gannets is that you can almost reach out and touch them - and they more or less ignore you. You could almost be just another gannet – it’s that intimate.

Like all intimacies, there are a few warnings: some advise hats, as landing and departing gannets swirling overhead have been known to crap on humans, and there is a bit of a stink. But the wind blows that away: what we are left with is a box seat, beholding flight patterns and fly pasts way better than any air show. It’s a bit like being one of those strange people you see parked on the runway verges of New Zealand airports (do it while you still can), right where the planes zoom in to land. Flaps down, air brakes extended (their paddle-shaped feet), these birds surf the air currents, making pinpoint landings every time. Then they take off again, like an expert STOL pilot powering up from primitive airstrips in New Guinea or Alaska in his De Havilland Beaver or Pilatus Turbo-Porter.

Yes: I’m back at Muriwai, northern waters, every time I think of these amazing colonists: so like us in some respects, so otherworldly in most others.

In their glorious ceramic whites and burnished yellow-brown headscarves, these pilots, these divers, these submariners have so much joy to pass on to the patient watcher.

Put them on your bucket list - and take a good camera with some zoom. 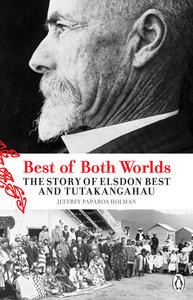 His most recent work is Best of Both Worlds: The Story of Elsdon Best and Tutakangahau, published by Penguin in 2010.

This non-fiction work delves into the 1895 meeting in the rugged Urewera ranges between Best, a self-taught anthropologist and quartermaster, and Tuhoe chief Tutakangahau, which would have lasting effects on our views of traditional Maori society.

For more information and to purchase that book go here,  for his acclaimed poetry collection As Big As a Father go here.