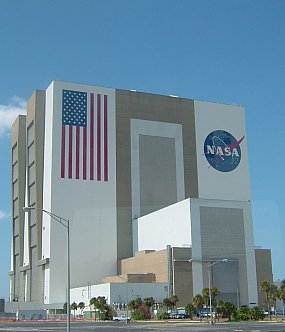 The day of the event, the transfer bus driver stops at his second scheduled pick up, but no one is there.

However instead of promptly moving on, he swings himself down from driver’s seat, kicks the tyres and looks at his watch. After 10 minutes or so, he jumps back into his seat and, without a word of explanation, we rumble on to the next and last pick up.

Here it becomes apparent what is going on. Before he checks in his final passengers he makes what seems like almost an aside to the existing riders.

He'd been marking time to get to the best spot.

This was the day of the penultimate Space Shuttle launch.

He gets out of the bus again and leans against the grill, craning his neck like one of the wetland cranes, avian residents of Florida. One by one, people cautiously make their way off the bus. The sky is filled with grey cotton wool stretched over a loom, nothing but the ephemeral fabric to be seen.

A young girl with an out-of-state accent speaks, “it’s separated”, she reports. The white wires running down both sides of her neck giving credence to her statement. She's plugged in to her earphones, tuned in to the local radio station. It was over, we'd missed it.

We all get back on the bus. 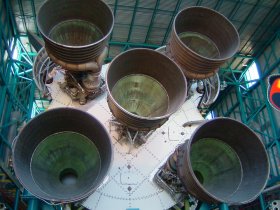 A launch event at the Kennedy space station used to be a big deal in New Zealand; people would set the alarm and huddle around their old black and white television screens with their cups of tea, the kids with their Milo, transfixed while the hot drinks became cold.

Not anymore, back home we'd had to search the digital channels for the merest glimpse of the last shuttle takeoff in July. But in May at Cape Canaveral, the entire staff complement were let out for the last ever chance to see the Atlantis Space Shuttle being prepped for the final shuttle journey.

The concourse is filled shoulder to shoulder as our bus swings round the perimeter risking a topple as all the passengers lean over to the left, cameras snapping like the jaws of the many alligators in the compound. Even the guide is profusely gushing as this is indeed a rare event, to see a shuttle out in the open.

Driving up to Cape Canaveral, my neck is continually stretched to the right, trying to spot the wild alligators in the culverts lining the highway. They are elusive but now and then one shows itself as if to say, “We are here and waiting!” Having wildlife around seems incongruous with the plethora of space travel technology on offer. 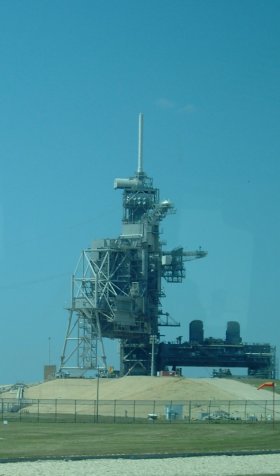 On our approach to cross the Draw Bridge, i here is a feeling of entering an alien territory, the Cape is a military area and they take invaders seriously, patrolling the area with armed security. There are heavy restrictions as to where visitors are permitted. On the bus we're told we can only get off at certain points although the areas seemed deserted.

The tour includes a drive-by of the mammoth crawler transporters; these are the machines that originally conveyed the rockets and now the shuttles from the vehicle assembly building to the Launch complex. They move on giant tracks, the kind you see on army tanks, moving with the sluggishness of an overfed hippopotamus, on specially enforced roadways. Imagine eight tracks, two on each corner supporting an enormous platform, so big it is the largest self powered land vehicle in existence. Something you would expect to see in a space movie and it does make an appearance in the latest Transformers movie, Dark of the Moon.

Mid afternoon it is time for the Kennedy Space Centre Launch simulator. First step, not a giant leap, is to divest ourselves of all loose items in our clothing, not even a coin in a pocket is safe. Next is the queuing, here we are directed by serious looking men and women, lining up today’s temporary astronauts and offering an escape for those who had were not quite ready to launch in to Space.

This is a simulator isn’t it? Vast doors simultaneously open and we are ushered in to our capsule. A brief introductory talk . . . then it goes dark. Very dark. The low hum starts from the back of our brain somewhere and slowly almost without us realising it, the seats pivot to face the upper atmosphere. The noise increases and now we are shuddering at an intensifying rate, the instrument panel flashing before us and then abruptly we are floating, lift-off achieved.

Later, wandering around the grounds we come across the Rocket Garden. We need some contemplation time as well as a little fresh air. This is a place where a celestial gardener has scattered the seeds of the future and from the concrete has sprung metallic smooth sided vegetation. A dried old white gigantic tree trunk lies horizontally, masquerading as a Saturn 1 rocket.

Sitting amongst these tall spindly spectacles of the past is a spherical map of the night sky with the constellations etched on to a shiny black granite globe. 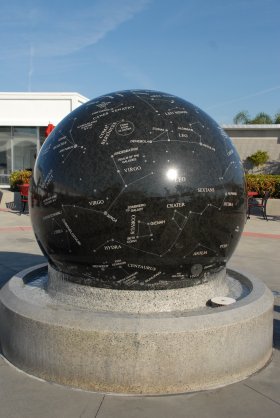 This is probably the only place where you can sit outside in broad daylight and see the evening stars revolve around in front of your eyes as the granite globe rotates on a jet of water, the dark mass contrasting with the brightness of the man made rocket trees.

Further along is an opportunity to test your claustrophobia by sitting in the life pod, trying to imagine floating back down to earth, if you were Russian or experiencing splash down if you chose to emulate the American experience.

Cape Canaveral is a powerful example of the American psyche.

Hero worship abounds, and rightly so when you look at the history of space travel. The bravery of the pioneering astronauts is mind blowing. What these people were sitting on and trusting in to project them in to the future is scary. Even today, the shuttles have an external tank holding over 1.8 million litres of fuel which is consumed in about eight minutes.

The grand scale of the complex, the dedication of the people and the achievements that have happened here will last forever in my mind. The cessation of the shuttles is not the end of the story, just an opening for a new series of missions yet to be realised.

Catherine Howard is an avid traveller also currently studying English and Classical Studies. Her next trip is to the London Olympics.