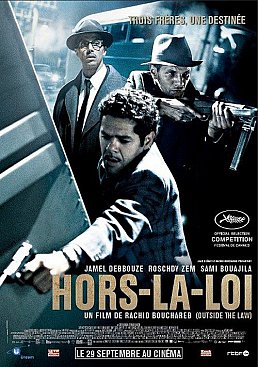 When Outside the Law (aka Hors-la-Loi) by the French/Algerian writer-director Rachid Bouchareb screened at Cannes in 2010 around 1200 people, revved up by a right wing politician, gathered to protest noisily.

Interestingly, none of the protestors or the politician had seen the film before labeling it as anti-French and promoting terrorism.

In a broad sweep of history, Outside the Law tells the story of the Algerian resistance to French colonial rule, in the guise of a family drama. On one level however it’s a big budget film with a tricked up storyline featuring several gangster-style gun battles and three Algerian sharp-suited brothers who battle it out with Parisian police for the independence of their homeland.

The majority of the story takes place during the Algerian revolution in the mid-Fifties and follows the French wing of the independence movement, the National Liberation Front (FLN). The film’s subject matter had a personal relevance for Bouchareb; his parents were members of the FLN and part of his research for the film, compromised of firsthand accounts, of events. Including one scene where thousands of Algerians are massacred by French authorities in the town of Setif in 1945. (The Setif massacre lasted several days and is considered the event that sparked the anti-colonialist movement).

That French politician took offence to Bouchareb’s depiction of the massacre and so whipped up the frenzy that lead to the protest.

Bouchareb was surprised by the inflammatory reception, stating he wanted to make a film that provoked reasoned debate about what he describes as France’s and Algeria’s shared past. Bouchareb’s film obviously didn’t have its intended effect, stirring emotions that still run deep regarding France’s colonial past.

At the heart of the film is a story of people caught in the conflict, three brothers with differing views on revolutionary tactics. 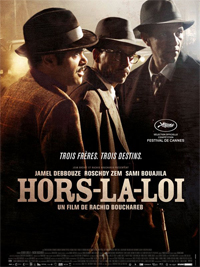 Abdelkader (Sami Bouajila) is the head of the FLN and has a ramrod devotion to his cause.

His younger brother Said (Jamel Debbouze), is a nightclub and boxing gym owner and although sympathetic, favors individual rather than collective action. And a boxing match becomes the source of hostilities between the two brothers. Said wants his champion Algerian boxer to represent France – “a win for France is a win for Algeria” --but for Abdelkader it’s a case of fighting for the enemy.

The third brother Messaoud (Roschdy Zem) is also a member of the FLN but caught between his two opposing brothers.

It’s a case of family connections versus personal convictions tied into the bigger historical picture.

Unfortunately, for audiences outside of France and Algeria and not up to speed with the history of the revolution, some of the references get a little lost. For example, Messaoud leads an assault, machine-gunning two truckloads of soldiers.

The scene closes with the head of the Red Hand (the French government sanctioned secret anti-terrorist squad) inspecting the carnage and he has the line; “A Harki unit wiped out”. There is no other mention or explanation of what a Harki unit is.

With an understanding of what the Harki were (in fact, Muslin Algerians who fought with the French), the motivation for the shooting makes strategic sense. Without that, it becomes another shoot-out that follows a tit-for-tat game between the FLN and the Red Hand.

Similarly, the FLN’s viscious battles with the rival Algerian National Movement (MNA) known as the Café Wars, is reduced to a few scenes that don’t succinctly link the sanctioned killing of a MNA supporter to the Café Wars.

Events are reduced down to sketchy episodes without enough exposition, flattening the story into generalization. 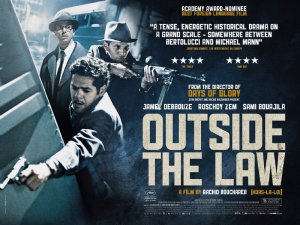 Given the story line and budget, there is an earnest tone but there is a scene that cuts through the heavy nature of the film.

Messaoud’s wedding begins with a bridal procession and ends with a neighborhood party. The noise of the excited guests, the music, (drums, pipes and hand claps) the traditional clothes and the social etiquette (men and women dancing in separate circles) says a lot about who the characters are culturally, the importance of traditions and its one of the few scenes where you get a sense of the Algerian community.

None of the background actors appear self-conscious or awkward (as they do elsewhere in the film) and everything feels spontaneous and lively.

But when the police gatecrash the wedding in retaliation for an earlier FLN related incident, the story returns to the routine plot patterns, and some of the film’s energy and authenticity seeps out.