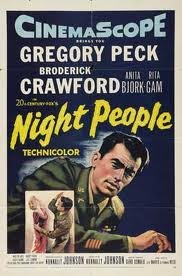 Nunnally Johnson’s Cold War drama Night People (1954) opens with the words "Berlin Today" superimposed over a shot of the four flags of the city’s occupying forces.

The French, British and American flags of the capitalist west stand together; the Soviet hammer and sickle stands alone smaller, less prominent, giving the bad guys of this film an unequal billing.

In a short following prologue, the bad guys kidnap a young American soldier innocuously named Johnny and bundle him into a car that speeds out of the American sector into the night.

The man on the case securing the soldier’s release is CIA agent Colonel Van Dyke played by Gregory Peck. Broderick Crawford is Charles Leatherby,  Johnny’s father, who is a wealthy, politically well-connected industrialist and who roars into Berlin thinking his money and influence will get his son back. . . but soon realizes he’s effectively powerless, ceding control of the situation to Van Dyke.

To further complicate the plot the Russians demand a deal; two ex-Nazi agitators living in West Berlin in exchange for Johnny’s return. The motivation for this deal is darkly sinister; (and far-fetched) joining the ranks of the Russians are Nazis wanting to avenge the work of the agitators.

Throughout the movie the Russians are presented with only a few basic characteristics – they remain largely unseen, communicate through an intermediary and work primarily at night – a darkly mysterious force of seemingly mythical bogeymen. Whatever lessons the movie delivers on the Red Peril are balanced by a little light humour.

Sargent Eddie McColloch (played by Buddy Ebsen, perhaps best known as the Beverly Hillbilly Jed Clampett) is Van Dyke’s comedic side kick, who does goofy things like getting stuck in a dumb waiter and guzzling Absinthe. And there is a running gag about a doctor, supposedly a reformed smoker bumming cigarettes (and we, the audience get a few unintentional laughs at the expense of Fifties mores as we watch the doctor and other characters light-up in hospital corridors and rooms). 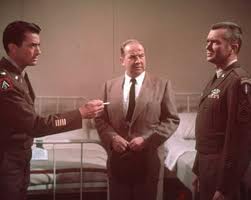 The quirky set design for the hospital may wring out some more unintentional laughs. The colour that dominates the hospital isn’t a sterile, pristine white but a pale peppermint green – walls, tiles and radiators, (suspiciously the same colour also turns up at the American Military Headquarters). The walls feature hand painted signs demanding lights are switched off to conserve energy, and there’s very little medical equipment on hand.

By contrast to the oddly stylized interiors, the exteriors have a degree of realism shot on location in Berlin, the aftermath of the war visible with backgrounds of bombed out buildings.

Night People was Nunnally Johnson’s first film as director, he also produced and wrote the screenplay which has a lot of smart funny dialogue, testament to Johnson’s background as a successful Hollywood screenwriter (with a couple of Academy Award nominations for Best Screenplays).

Visually there’s static flatness in several scenes of long talky takes, the camera only occasionally moving and the actors placed either side of the picture frame with an awkward gulf of space between them. Johnson’s career as a director had varying degrees of success but was relatively short lived when he quit in the early Sixtgies to return to screenwriting.

Berlin was the setting for a number of Cold War films, including Billy Wilder’s satirical comedy One Two Three, shot on location shortly before the building of the Berlin Wall 1961, Martin Ritt’s classic The Spy Who came in From the Cold 1965 (actually filmed in England and Ireland) and Hitchcock’s espionage thriller Torn Curtain 1966 not one of Hitchcock’s greats but still enjoyable.

Night People won’t join the league of Cold War classics but it’s an interesting curiosity for all its faults and features.

Ummm... The Third Man, anyone?

I believe the Third Man is set in Vienna rather than Berlin. 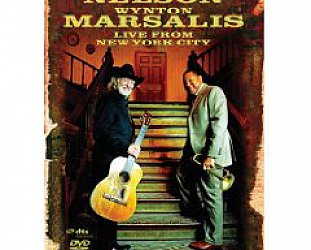