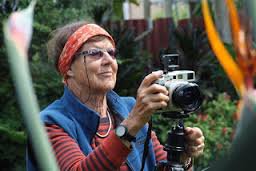 Photographer Gil Hanly neatly sums up the motivation behind her work. “I’m a documenter, not an art photographer. I photograph the things I’m involved in”.

Gil has applied this approach to her photography for over 40 years, and examples of both her recent and her archival work can be seen in two exhibitions in the 2013 Auckland Festival of Photography.

There is ‘Artists in Situ’, a solo exhibition, and ‘Nga Puna Waihanga’, a collaborative exhibition with photographer John Miller. Although the exhibitions show many different aspects of recent New Zealand cultural life, they share the common goal of recording and documenting our artists, their lives and their involvement in their work.

'Artists In Situ’ (from June 4 until July 28 at the TSB Bank Wallace Arts Centre, The Pah Homestead, 72 Hillsborough Road, Auckland) focuses on artists in their studios, but not all the images strictly follow this format. Gil had already photographed many artists over a long period of time, and this exhibition has originated from her work in this area.

Further impetus came from Sir James Wallace, who commissioned Gil in 2012 to photograph an extensive list of artists whose works feature in the Wallace Arts Trust collection.

As she was married to an artist (the painter Pat Hanly, who died in 2004) I had assumed Gil was comfortable in the company of artists and this had made the photographic process easier, but she explained that the bonds with her subjects are often much deeper. In many cases the artists are also her friends, and also her friend’s children.

“Matthew Browne, his parents are old friends of ours, and we were living in London when he was born. Or Julian Hooper – he was one of the local kids when we lived in Windmill Rd.”

This brings a sense of family and closeness to this exhibition. These bonds have been forged over a long time. 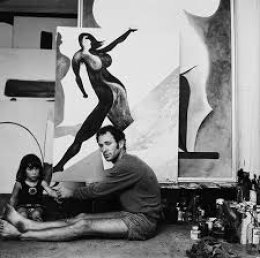 "When we got back from London we were reconnecting with people again, and now I’m not even sure … I would set the camera up, but sometimes Pat would click it and sometimes I would click it! But I was the photographer, and it was my camera.”

Whoever clicked the shutter, these black-and-white images of Milan Mrkusich, Pat Hanly (right) and Colin McCahon are all interesting in different ways. The sharply dressed but self-conscious Mrkusich is standing at an awkward angle in his studio.

High triangular windows light the scene. He is surrounded by his paintings and cuts a very cool and modern monochrome figure, far removed from rough-and-ready Sixties New Zealand.

The photo of Pat Hanly with their daughter Tamsin is far more informal, and there is a pleasing sense that the subjects are almost unaware of the photographer. 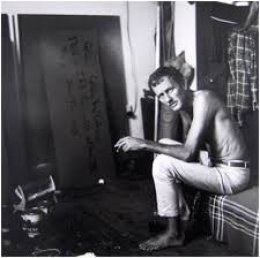 This is in contrast to the image of Colin McCahon, who appears uncomfortable as he turns to face the camera, but Gil explains this was simply due to his dislike of being photographed. It’s a discomfort she understands well.

"I don’t like having my photograph taken very much either, that’s why I’m behind the camera.”

Gil prefers to photograph her subjects while working rather than setting up a posed portrait. Max Gimblett is a good example of this approach.

Although based in New York, he agreed to be photographed in Auckland and is represented in an action sequence of six photographs, concentrating on the moment when brush meets paper. 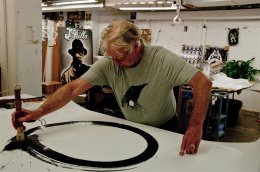 "It was quite fun, interesting to see. Some people work very meticulously and very carefully. Dick Frizzell, for example, is working on a mural at the moment and will spend quarter of an hour on one little bit, and work very precisely, where Max is very dramatic, and throws stuff around”.

The ‘Artists in Situ’ project isn’t yet finished and remains an ongoing project for Gil. Although she isn’t able to travel throughout New Zealand specifically to complete the assignment, she is determined to photograph the remaining artists on the list when further opportunities arise.

This also documents many New Zealand ‘artists in situ’, but this time the subjects are photographed at the annual Nga Puna Waihanga hui of Maori writers and artists, the first of which took place at Te Kaha in 1973.

Gil attended her first Nga Puna Waihanga hui in 1987, covering the event for the Listener. Her attendance then and in subsequent years was part of a personal reassessment in the wake of the 1981 tour.

"After the Springbok tour and the Peace Squadron, I started thinking more about peace and justice – why the hell are we protesting about things in South Africa when things are such a mess here? I started going to Waitangi, I went on the 1984 Hikoi, and got to know a lot of people. 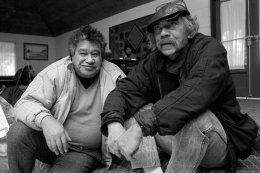 "John (Miller) had started doing the Nga Puna Waihanga hui when they first began, and has the interesting early shots. Most of the later shots (in the exhibition) are mine and the early ones are John’s.”

The photographs include some well-known names such as Hone Tuwhare and Ralph Hotere (right), but John Miller has also captured some candid moments showing the range of activities that took place at the hui, such as kapa haka, screenprinting, sculpture and painting, dance and music.

The brief interview over, we go out to Gil’s studio, where some of her work is stored, and she shows me two of the early photo books she compiled.

One is from the 1984 hikoi and another documents the arrival and the subsequent bombing of the Rainbow Warrior in 1985. As we look through these books, I realise these two collections alone make a huge contribution to our history, but that they represent only a small fraction of her work.

I’m inspired by her continuing energy and enthusiasm, and she shows no sign of slowing down.

‘Nga Puna Waihanga’ and ‘Artists In Situ’ are exhibitions that confirm Gil Hanly as one of the leading documentarians of New Zealand cultural, social and political life over the last 40 years.

Jonathan Ganley is an Auckland photographer whose work has covered many subjects, notably however New Zealand musicians. Some of those portraits appeared previously at Other Voices Other Rooms here, and a gallery of his work is available at his website pointthatthing.com All his photos are copyrighted, do not use without permission.