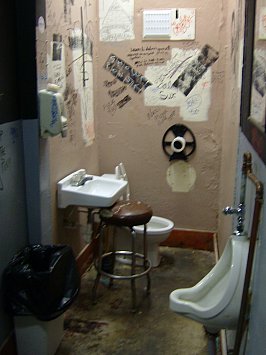 It’s not until you’ve lain miserably ill in some far-off outpost of underdevelopment that you really appreciate Western standards of healthcare and hygiene.

Lying in a fleabag hotel room in Kabul, Afghanistan many years ago, gasping with pain at every breath, I could only think of home, clean sheets and a convenient bathroom. It didn’t help that the hotel manager was at that moment stripping the room of anything portable – chairs, rugs, tinted photos of Mecca – around his stricken guest.

The hotel has been sold,” he told me sadly as he heaved up the end of the bed to free a tatty rug, “so we must remove all chattels!” I could only grunt.

I’d taken suddenly ill with gut cramps earlier in the day after yet another tussle with bureaucracy in a dingy Ministry of Tedium office somewhere in the city. We were chasing an official stamp that would allow us to leave the country without the VW Beetle we’d driven there from Britain, and which we needed to sell to fund our onward journey to India.

My then-wife loaded me into taxi to take me back to the hotel while she went on to confront (or perhaps bribe) the next petty official.

She arrived back at the hotel later and quickly summed up my state as “not good”. She hurried downstairs to ask for a cup of tea to be sent up to our room. The manager was apologetic: teapots and cups had all been sold. But he would call a doctor.

The doctor – let’s call him Hamid – arrived after a while, accompanied by a “technician”, a scruffy-looking gent with a lighted fag drooping wetly from his lips. Dr Hamid seemed none too sympathetic with the longhaired tourist’s condition. He poked me in the gut. “Does that hurt?” Yes, I gasped, a lot.

Severe colic,” he announced. “Have you been smoking hashish?” Well, not really, I muttered. “Hah! Your Western doctors know a lot about medicine, but we know about hashish!” Smoking dope, he opined, weakened resistance to stomach bugs. He was probably right.

oh the agonies this reminds me of, Marrakech, Turkey, London , Langkawi and 2 weeks ago a milder North Shore version.... But with the added advantage of knowing how to present the added details to best effect. so much more bearable when not sharing a bog with other customers.