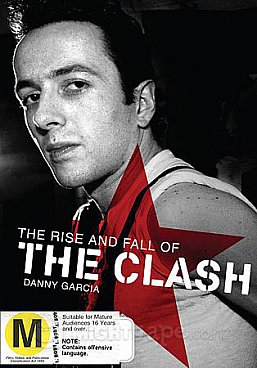 First, I should point out the Clash broke up before I was born and I'd not even heard much of them before I watched Danny Garcia’s film, The Rise and Fall of The Clash, at Elsewhere's invitation.

Because of that I was confused for the better part of the 93 minutes duration. There were cuts from one idea to the other with the assumption the viewer had a clear understanding of the names of people in the band, the different managers, and the context of punk rock.

Although in saying this, towards the end, I was enthralled. It was like a gripping tale I wanted to end happily. I wanted Joe Strummer and Mick Jones to make up, get Topper Headon out of rehab and reform The Clash, banish the baddie manager Bernie Rhodes and go on to create million dollar records and play at sell out concerts.

The film became a narrative, it took on elements of a classical Hollywood three-part narrative structure: there was a distinct beginning, middle and end. With a hook: what happened in a 12 month period to cause the fall of the Clash?

Garcia’s film outlines why such a great band faltered at a time where they had all the resources where they could flourish and maybe become the greatest band of all time.

But there was rising internal conflict: the frustration of each band member. But something like a happy ending: Mick and Joe play on stage together after more than 30 years. This structure almost makes up for not actually knowing what is going on.

The Clash was really a band that clashed within themselves. They imploded with all their anti-establishment hatred and anti-commercial stance. Yet with the aid of manager Rhodes, the Clash became a franchise. Everything they stood against and laughed in the face of when they were starting, is what they became. The film paints Bernie as the villain of the Clash story. Basically, all their problems came down to his military-like management and manipulation.

The first stage of The Clash’s demise was the sacking of drummer Topper. A band is meant to be a team, and members irreplaceable. The replacing of Topper created a domino effect to the replacing of Mick and then the attempt to replace Joe. If the band doesn’t have the members, but just the name, is it still the same band? (Sorry INXS)

The Clash came from the punk movement of the late 1970’s and emerged in an age where there was anger over unemployment and authoritarianism. The band was fuelled with anarchic rage, they spat in the faces of authority and had a left-wing political agenda.

I would argue the Clash struggled through a genre that saw the early destructions of many great bands (like the Sex Pistols). The Clash incorporated and experimented with the genre of punk rock, adding different sounds and went on to become a very influential band.

As a band the Clash did crash and burn, but along their 10 year life span they created a legacy which we can see evident in music today. They were inspirational. Maybe this is down to the way Bernie managed the band? Maybe his crazy ideas and bully tactics inspired the band to create damn good music?

The Clash were a resilient band. There was nothing stopping them musically. I believe this started because the four main (longest playing) members of the band had such a diverse taste in music.

We learn that Topper the drummer, was interested in jazz, bassist Paul Simenon was into black music, guitarist Mick was heavily influenced by rock’n’roll, and Joe liked rhythm and blues and American roots music.

This diversity was fused together and created a sound that had the stamina to last through the years. The band were also influenced by reggae and on the ’81 American tour, Mick heard and experienced hip-hop (created by another marginalised group like punks and Rastas). He incorporated it into his song writing. This inspired their single This is Radio Clash which is mixed with hip-hop flavours.

The band's last album Cut the Crap features a drum machine and mostly hired musicians. This electro album produced dismal reviews and is the clinch in the final breakup of the band, but in its intention it tries to fuse this punk rock notion with another genre which does carry on throughout the history of music.

The opening lines of The Rise and Fall of The Clash, come from Shakespeare: “Be not afraid of greatness. Some are born great, some achieve greatness and others have greatness thrust upon them.”

Were all the band members individually born great? Did they achieve greatness? Or did they have greatness thrust upon them?

On the evidence here you'd conclude the original members of the Clash were born great through the musical talent they possessed, had greatness thrust upon, and achieved greatness through the legacy and influences they created from their music.

The Rise and Fall of the Clash by Danny Garcia, on DVD now through Shock

Susan Epskamp is a self-described wanna-be music journalist and the person in her group of friends who always gets a weird look when she choose a song to listen to. She says she aspires to be more like John Lennon in her style of writing, "quirky, but deep and meaningful".