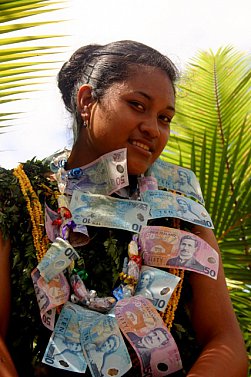 Niue. Have you been? It’s a beautiful, rugged, raised coral atoll in the South Pacific. It’s a place for adventure, discovery, disconnecting oneself from the ‘real world’.

Our host, Graham Reid has spent a bit of time in Niue discovering the place, and, most likely, something new about himself. To find out some of his highlights and definite ‘to do’s’ check out his articles. I’m here to talk about other aspects of this gorgeous little place.

I have spent a fair amount of time in Niue. I spent 2007, my ‘gap year’ after university living in Niue, where I learnt a lot about myself, life and what challenges life can throw at you. I went to escape the ‘real world’, to ‘find myself’, to be adventurous!

Having just graduated with a Diploma in Photography, I was also there to embark on my first big independent photographic project: documenting life in a small pacific island. And I did. My camera and me were welcomed into the folds of life on Niue. I worked in the local frosty boy ice cream parlor; I explored the ins and outs of the island on my bicycle and was taken on adventures by locals keen to share their places with me. I fell in love with Niue on so many levels.

And thus, my connection to Niue was bonded. I am known first and foremost as ‘the girl who fell off her bicycle’, secondly (as everyone in Niue is known by multiple names) as ‘frosty girl’ daughter of the backpacker proprietors Brian and Ira Merrifield (I’m not actually their real daughter, but I am very good friends with one of their daughters, and they have become my second family). 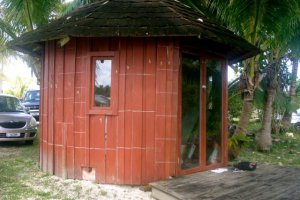 I am hoping to expand on my Niue monikers – I want to be ‘the girl that paints the murals’ and ‘the girl who took the photos’.

I am on my way to earning these titles: In April 2013, I participated in the third Niue Arts and Cultural festival, where I painted two large murals in the middle of Alofi, the capital. The idea behind that project was temporary beautification of some of the abandoned buildings in Niue (and there are a lot of them!) – it’s a contentious issue: the powers that be want a lot of these abandoned homes, shells of buildings, pulled down. The families that own the land these buildings are on resist this move. There are great costs involved and uncertainty about what might happen to the discarded asbestos. Essentially, horns are locked, and for now most of the abandoned buildings will stay as is.

The murals of 2013 were a great success! Lots of people can claim participation in their creation; they bought bright splashes of colour to otherwise non-descript buildings. 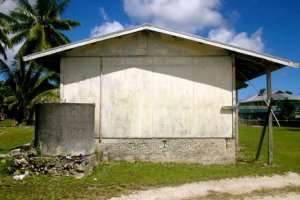 For the Arts and Culture festival 2015, we will do another mural. I intend it to become my ‘thing’. As long as there are empty and abandoned buildings on Niue, there is a canvas for beautiful, bright murals to be done.

But that’s not the only plan for festival 2015…

When I was in Niue in 2007, I came across this amazing publication known as ‘The Millennium Project’.

It was the size of a newspaper and had images of almost everyone that had been in Niue in November 2002. It was produced by a Swedish printing house, The Bold Group and was, really, little more than a marketing endeavor. It fascinated me. In the five years since it had been produced, I could see the change in population that had taken place. I watched people devouring its contents like a photo album: identifying friends and family; people no longer in Niue; kids that had grown; people that had passed on.

I longed to recreate the Millennium Project then. As Niue has such a small, transient population, I could see the social relevance in updating such a work on a regular occasion – what an interesting story of community it might tell. But, as that dramatic fall from my bicycle would have it, 2007 was not the time for me to take on such a project. 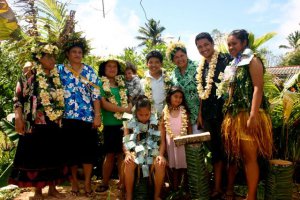 We will collate all our images together into a magazine styled publication and exhibition to present to the people of Niue at the 2015 Arts and Culture festival. This time, it will not be a marketing ploy, but more of a national photo album and an observation on the transience of population. A collection of images to treasure that will say ‘this is who we were at this time’. It will be called Takai – A Portrait of Niue.

And, with any luck, we will have the opportunity to return in another ten years to update it again.

We are running campaigns through the NZ Arts Foundation crowd funding website (here) to raise funds to get to Niue to collect our images and to offset costs of printing our publication. We invite you to check it out, to support us and join us on our Takai, and to spread the word of our project.

This is going to be an epic project for a special little place!

Alexa Shaw is a Kapiti Coast-based photographer. Her crowd funding runs until November 14.