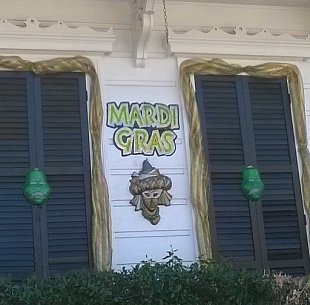 My wife and I flowed into New Orleans by way of a week-long stay-over in San Francisco. It was a good laxed-out hippie preparation for the weirdness of festival time around the 10th anniversary of the apocalyptic Hurricane Katrina.

We arrived early February with several parades already having gone the various street routes and a parade underway. Our Somalian taxi driver was irate at the road closures saying it was bad for business.

My pronunciation of our street address as Mel-PO-mene also caused delays.

You see my Maori travel perspective extends to everything, including local culture. Eventually we found out the street was pronounced Mel-pour-main. It was one block off the main Mardi Gras route.

We walked down that block that night. 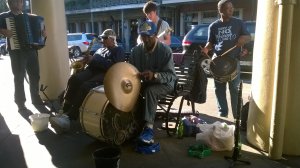 It was awash with coloured necklaces, strung on iron railed fences, around people’s necks and arms and in the gutters. And after the Latino hues of the natives of the district we stayed at in San Francisco, the blackness of New Orleans was a stark contrast.

Black families, with their chilly bins of food and drink and ladders with seats fastened to the top, were camped out on both sides of the street. One side was the normal footpath or sidewalk, the other was the tramcar track.

It was early evening around six so a lot of babies and young children were swinging on their parents’ hips along with their own bangles and trinkets. When I asked, where was the parade, they said it would be along any minute.

Well, that minute stretched for about an hour so we went walking.

We were able to go down the centre of the road pushing through some tourists like ourselves and noticed the scarcity of white faces.

In fact I photographed the few I found.

Most shops, hotels and houses that fronted the route along St Charles Ave had viewing stands where people paid to watch. The ladders and seats were the low-cost option. Every 10 minutes or so a police car with lights flashing and siren sounding would come down the road and clear a path that would be soon swallowed up.

But then the crowd sparked up as in the distance came a drumming sound.

Soon the marching bands appeared, mostly black males 10 or so abreast. They played trumpets or trombones with large percussion sections backing up behind. It was these drums that made the throbbing sound along with the raucous crack of the snare drums. 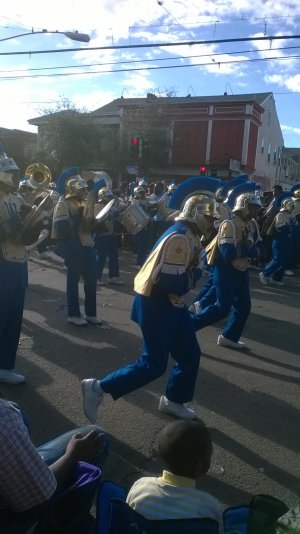 Before the band came large men who strong-armed the crowd back to the edge of the sidewalk so that there would be enough room for the band to go by. If that was not enough, the outlying trombone players had a way of aggressively cutting a musical and physical path with their ‘bone.

Their uniforms were mostly of a military nature emblazoned with the name of a local school or district. But the headpieces were spectacular, especially the shiny brass Roman-style helmets. And they could dance as well as they marched, breaking into shuffles, hip-hop moves and booty calls.

That was just the guys.

In front and behind came young women in flesh-coloured mesh stockings and form-fitting marching outfits. Some carried flags on poles which they threw into the air while others twirled coloured sticks. The leader kept some order with piercing blasts of a whistle.

And they boogied as well.

I’d say it was a con-flageration of sight and sound.

But what came in between the many bands was really strange.

They first appeared as fantasy figures from a Grimm’s fairy tale or Disney parade. Big bright faces tacked onto an enormous white swan. Or a grinning gargoyle at the head of a decorated two decker bus.

And they all had people on or in them, people with masks throwing things at the swarm of people lining the route. Then I realized this was where the coloured trinkets came from. People flowed up to the sides of the floats begging the masked riders to throw down to them. 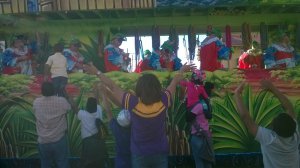 I flowed forward too with my camera to complete the tourist visa.

Then I noticed behind the masks they were white people.

I even checked my shots after they’d passed to see if that was so.

They were white folks throwing out trinkets and ‘bling’ to mainly black folks.

Sort of like white settlers treating with the natives.

The black people in the crowd certainly didn’t find anything strange, they even gave me advice on how to get better quality ‘throws.’ The trick was to hang back from the swarm around the float and catch the eye of a ‘thrower.’

A held-up hand-written message such as “ ‘Ýou look great!’works a treat,’ “ I was told. 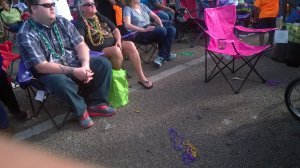 I can testify that it worked for one woman. Another dad held his child up to the float people and ran alongside. He targeted particular people who had the treats he wanted.

Perhaps the incongruity of white folks in masks comes from my over-active imagination and reading of Southern history and the Ku Klux Klan.

I asked a few white New Orleans people about it and they didn’t notice anything strange, just my question.

I saw four parades while we were there with the same mix of white float-riders throwing to mainly black people. It may be that the businesses that sponsor the floats are mainly white. Maybe more white folk stay home from the parades or perhaps it was just that the area near Melpomene and St Charles was black.

It was just that in the daytime I saw plenty of white people in the streets, shops and cafes.

Oh yes one other thing.

There was a shooting the night before we left New Orleans, just a block along from where we watched the parade. Two young men were killed and police in the crowd jailed the shooter. All were black. 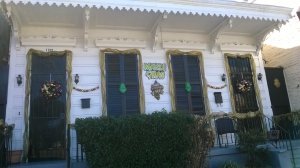 The newspaper said that area had a reputation from previous shootings. We’d known about the city’s crime reputation before coming but had felt quite safe in the black crowds.

Our taxi driver back out to the airport was an elderly black man and he felt ashamed of the city of his birth because of the violence.

True to the theme of our New Orleans stay, he put the blame on the sinful nature of some of the people and expected more retribution from above.

Piripi Whaanga was a Living Book at Womad this year giving a Maori/Pakeha perspective on 63 years of kiwi living as a writer, a philosopher and a Koro. He's also a singer-songwriter who's recorded his bi-cultural stories on nine CDs available at bandcamp.com/piripiwhaanga