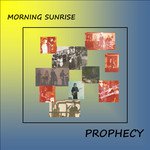 There wasn’t a lot to do for young teenagers in Morrinsville in the early Seventies. So Kim Murphy, Kevin Smith, another gal (Debbie) and I ended up forming our own little band. I think we – called Prophecy – had lofty dreams of being the next Abba.

Debbie left quite early on and we called in a guitarist/vocalist, Murray Ferguson, whom I knew from Te Aroha.

We did about of year of guest spots at local service clubs and events before we asked Stephen Horwood to join as drummer and we moved on to full gigs around the Waikato and a semi regular act at the Nottingham Castle Hotel. We were only 14 or 15 and somehow skirted the underage drinking laws by technically being employed by the hotel (Or maybe it was just that local police didn’t give a @#$%)

I don’t remember ever being paid a lot for these gigs but I do have memories of several very late nights in the house bar afterwards. And it was a fairly regular occurrence where we would finish a gig at one of the local rugby clubs and be convinced to play another half hour for the promise of a crate a beer (which the guys usually sat and drank while we were playing) 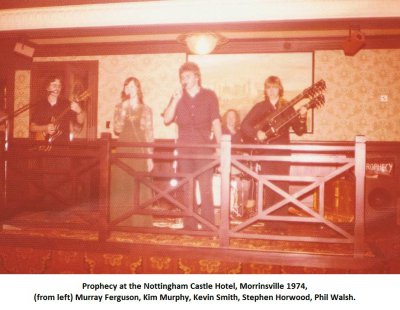 But the band eventually ran its course and we all moved on. Kim stayed in Morrinsville and Stephen ended up doing volunteer missionary service overseas.

Kevin, Murray and I migrated to Hamilton and for most of the Eighties and Nineties were part of the Waikato music scene playing in bands (in varying combinations) The Classics [pictured], The Break, Echoes, The Bronx, The Politicians, Split Image, China Blue, Living Proof and Velvet Bulldozer to name a few.

And, of course, the Nott was one of the regular places we played on the circuit. (Still the same carpet and decorations) 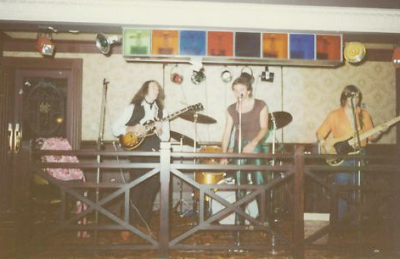 But sadly, international fame and wealth eluded us and eventually most of us succumbed to ‘normality’ and wondered off into the real world. Murray spent several years on the cruise ship circuit before landing in Sydney were he now works as a counsellor.

I ended up an IT systems consultant working with clients on both side of the Tasman and Kevin is now the in-house solicitor for the Dept. of Conservation. Kim is married with a grown family and involved the local amateur theatrical society. Stephen, we lost to cancer several years ago.

But the rest of us kept in touch, on and off, all of these years and three or four years ago Kevin and I were both back in Morrinsville, to attend one of the local productions that Kim was featuring in. 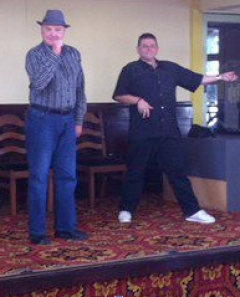 So we called into the Nottingham Castle.

Not a lot had changed at the Nott.

These days I spend a large chunk of my life in airport lounges and motel rooms. Early last year a friend (and another ex-Hamilton muso), Dean Carter loaned me an iPad with Garage Band installed.

Long story short, I wrote a bunch of songs and took them back to Dean, who thought they were good enough to record. So we did, with the full Logic suite and Dean as engineer/producer we started putting together an album of songs called Scenes From The Movie In My Head and due for release on the 25th June.

I called in a few old friends to help out including Ross McMillan from The Outlaw Teddys on drums and Rik Bernards from Knightshade for guitar on a couple of tracks. My first thought for guest vocalists was Kim and Kevin.

As we were working on the album we reminisced about Prophecy and the one original song we wrote, Morning Sunrise, and after a few wines late at night decided to record it, just for giggles. Kevin took on the drumming duties. Surprisingly it didn’t turn out that bad. It’s never going to be a Waterloo but it does reflect that time in our lives fairly well. So I decided to include it as a ‘bonus’ track on the album.

As luck would have it, I had some work in Sydney a few weeks later, so I took the Mac and interface over with me and gave Murray a call to see if he wanted to add some guitar tracks. He did.

Seeing as we basically had the original line up playing, we decided not just to include it on the album but also release it as a single under the name Prophecy.

So 40 years later here we are. A simple story of a group of school friends who all share a love of music and have keep in touch . . . and had nothing better to do late one night.

PS: As I sat down to write this, I was contacted by the son of our original drummer, Stephen. Someone had told him about the you tube clip of the song and he had never ever known that his dad had been a muso and once in band. So I’ll send him some photos and copies of some old recording featuring his dad. Kinda Cool.

You can buy a download of the Prophecy single Morning Sunrise from here. Phil Walsh's album Scenes Fron the Movie in My Head will be released on June 25, copies can be ordered from here.