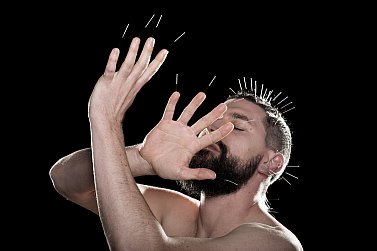 Editor's note: Dudley Benson is unique in the musical landscape of Aotearoa New Zealand, his musical projects stretch from pop sensibilites to sonic landscapes, from European classical traditions and choral work to respect for Maori waiata and traditional Maori instruments.

It is music which is consciously artistic and even consciously art music, but is also reaches into deep emotional and historical places which reference this country's fauna and flora, the tangata whenua (original inhabitants), landscapes and complex history.

His new album Zealandia has a broad and deep reach -- we reviewed it here -- and Benson writes about a couple of the songs on it. 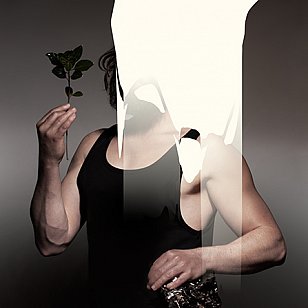 We should say the Zealandia album comes in digital and single CD formats . . .  but the best way to grasp it's scope is the double vinyl editin simply because the physical presence of four sides of music presented on that scale -- does digital have any "scale"? -- reminds you of how we once engaged with music on albums like the Beatles' White Album, the Stones' Exile on Main Street, Genesis' The Lamb Lies Down on Broadway and others.

We sat and listened and immersed ourselves in them. Zealandia demands that same engagement.

Although in our review we mentioned Allen Curnow's poem Landfall in Unknown Seas which came with music by Douglas Lilburn!

Here Benson speaks for himself and we attach the music which he refers to.

BIRTH OF A NATION

In 2009-10 I studied at the Maori Studies Dept. of the University of Auckland.

I was mainly there there to get a foundation introduction to te reo before recording the Forest album, but I also took papers in Maori politics and in contemporary indigenous issues.

I loved the discussion we had around the concept of de-colonisation. For a Pakeha I'll never understand all the true implications of colonisation in Aotearoa and how this feels for generations of Maori, no matter how much I learn about it.

But I'm emotionally inspired by the long process of de-colonisation that tangata whenua are going through: reclaiming language, rights, land, identity.

Birth a Nation is an anthem of de-colonisation, but not addressed to Maori. I'm feeling that Pakeha, or colonisers, now need to de-colonise ourselves.

To fully acknowledge our shared histories, accept what our ancestors seriously messed up, how our current systems and institutions and mainstream media radio continue to be racist and colonising.

I don't think it's impossible, and I guess like so many movements towards progress, it starts with teaching our children.

WE COULD'VE BEEN GODS

In 2004 I approached Auckland painter Jacqueline Fahey to talk about her friendship with Rita Angus whose Life And Vision touring show I'd just been commissioned to compose and perform a response to.

Jacqueline exhibited with Rita and understood her philosophy to creating and committing everything to her work: very political, socialist.

From this meeting, Jacquline and I became friends. We'd meet every few months – even after I moved to Dunedin – at her place in Grey Lynn (one of the few remaining Grey Lynn old school), and we still do.

I feel very strongly about Jacqueline's work. Like Rita, it has a singular voice that advocates for women in Aotearoa, often through beauty, humour and memory.

We don't usually talk about our work when we get together – it's usually politics and who is pissing us off.

One visit, over gin, we were lamenting the human species' response to climate change, when Jacqueline, always brilliant with words, shouted in exasperation: “We could've been gods!”

And I replied, “But we fucked it up!”

Pages below are from the Zealandia newspaper, by Dudley Benson & Matthew Galloway. Used with permission. It is available when you purchase the album: see his website here 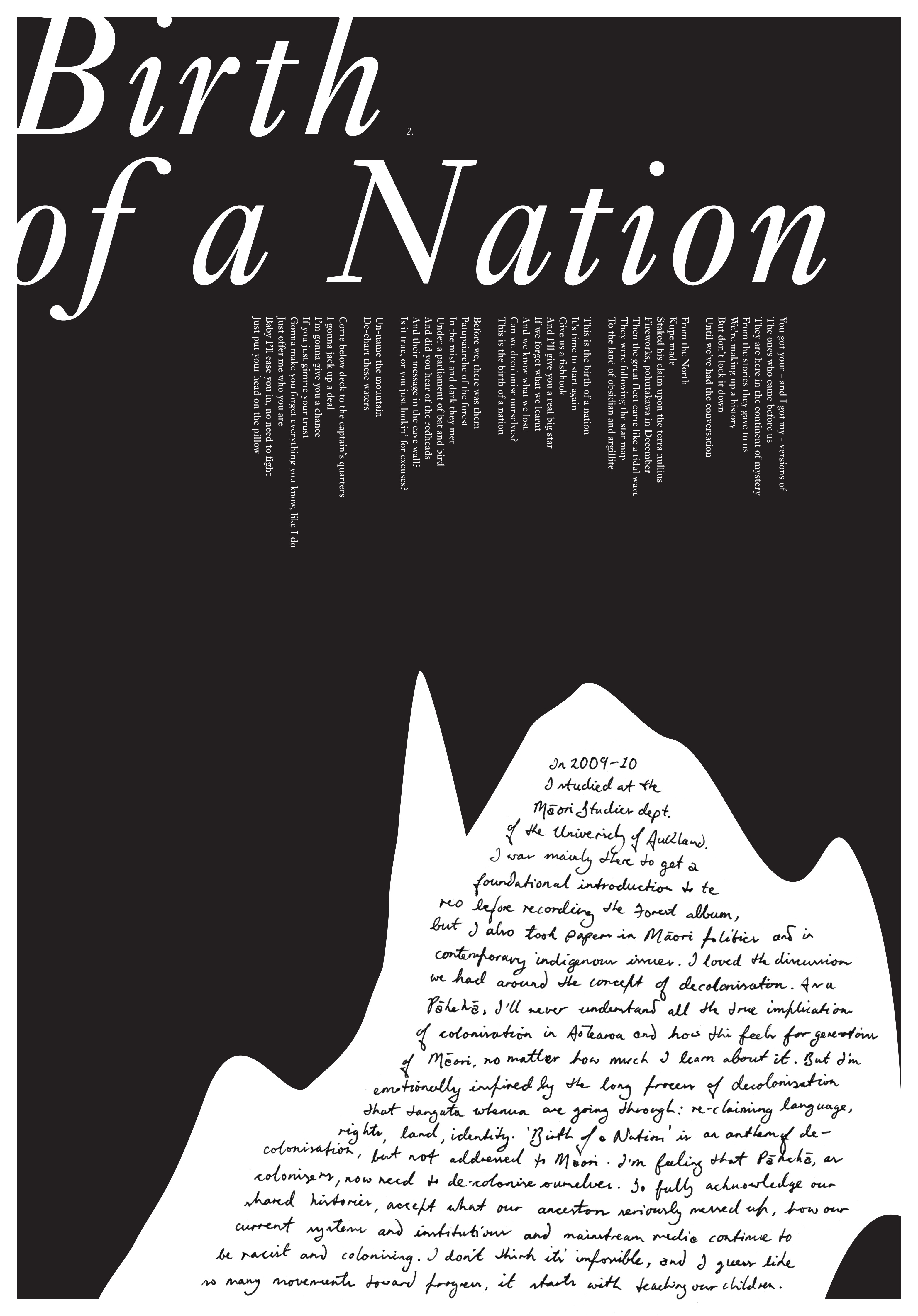 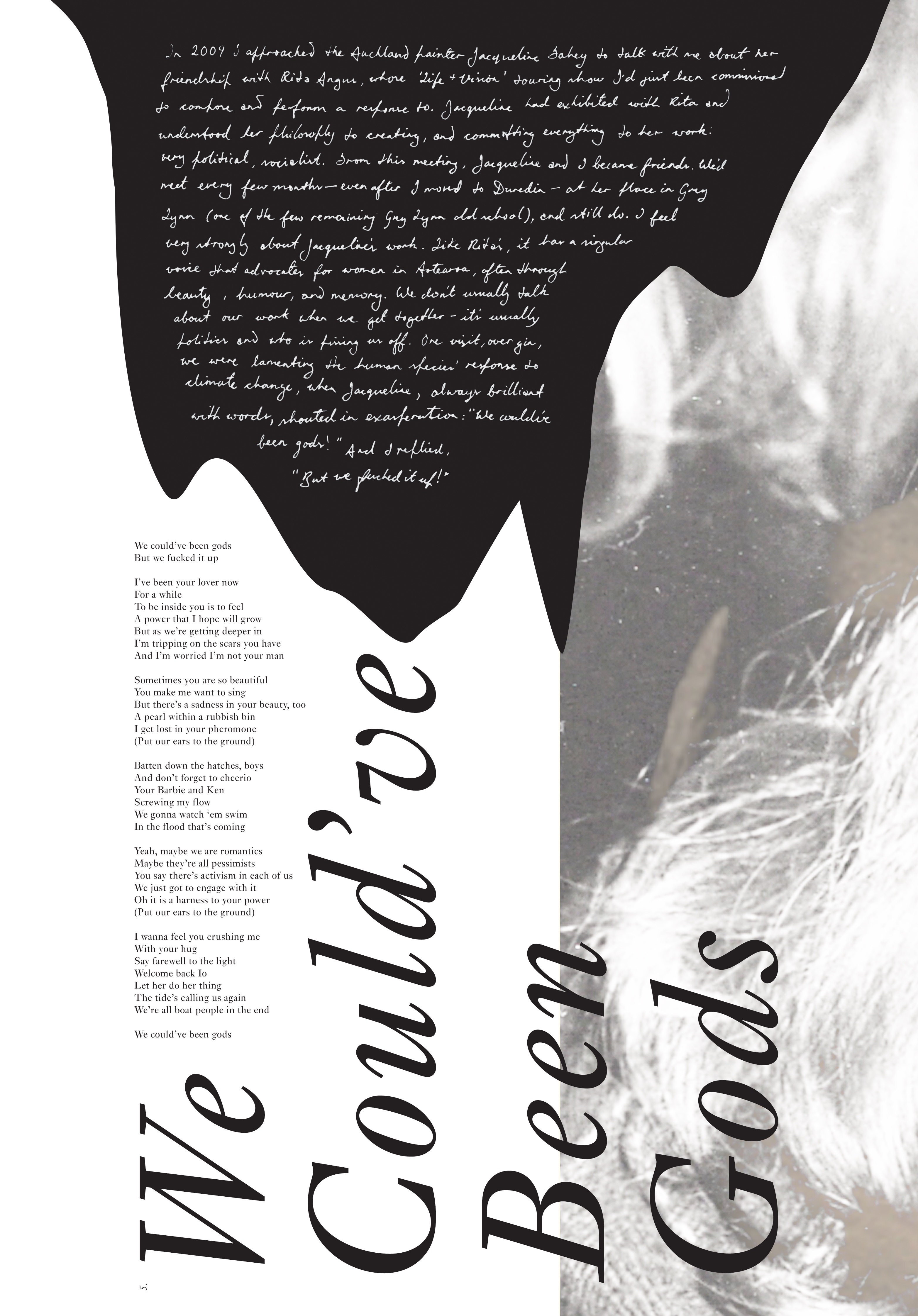