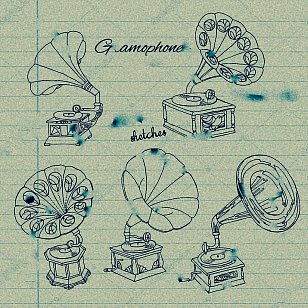 The film-Makers have given me permission to pre-release these 'works in progress' separately as it is now uncertain whether the film will now go ahead.

The storyline follows the colourful life of Monsieur Jean-Claude Rayon an unusual French inventor born in Lyon, who lived during the age of enlightenment 1789-1889. During his life, he invented scores of wonderfully odd and imaginative inventions. Including the recent discovery of an incredible gramophone.

In late 2019 there was a discovery of unpublished journals in the attic of his last home in St-Jean in Les Alpes Maritimes. In these remarkable journals, it is documented by M. Rayon that he had secretly worked on a gramophone device that could make music from different objects it was pointed at in the physical world.

In the collection presented, I have elaborated and incorporated some original melodies from the journals themselves into compositions. Naturally in the film, they also play a cinematic role in scenes against the backdrop of a truly mysterious and romantic man who lived a life of hope, love, yet also with great hardships.

Rayon like many in his youth was conscripted into the Napoleonic wars where he saw young men thrust or seduced into acts of brutality against others in the pursuit of economic and political gains.

In one of his journal passages, he says in his journal " We were forced to shoot fellow people with these contraptions, young men who breathed the same air and probably drank the same beer as us, all dead for the shining metal of technological progress and the illusion of power."

Apparently appalled by the tragedies of the war and the disservice of science, Rayon invented artistic works that would inspire people to "simplement aimer le monde et les autres" simply love the world and others. It seems as though the gramophone was to be the pinnacle of this artistic ambition, although it is unclear as to the price Rayon may have paid for achieving its fruition.

It is the disclosed journal entries from the latter period of his life 1879-1889 which explain the plans of the "Gramophone Device" and delve deeper into his thoughts of the human spirit and how such an invention could even "potentially transform the world". There are even some figurative sketches of battlefields with the Gramophone playing and soldiers from different nations all sitting baffled in amazement with their guns at their sides whilst they listen to glorious melodic passages.

Not just an artist, Rayon was as sharp a mind as any in France. According to the journals, the technical plans were both highly imaginative but also quite systematic and even pedantic in terms of detail.

There are 35 pages alone dedicated to equations and speculations on photo-sensitive cells that could also conduct electricity. All of the equations reference concurrent experiments by scientists at the time.

This entry for the album does not allow me to get into the details of all the different materials and cellular structures Rayon worked with, but what I can say is that he appears to have logically arrived at a fascinating solution to create sound from the interaction of both light and high frequencies with the surface of an object. 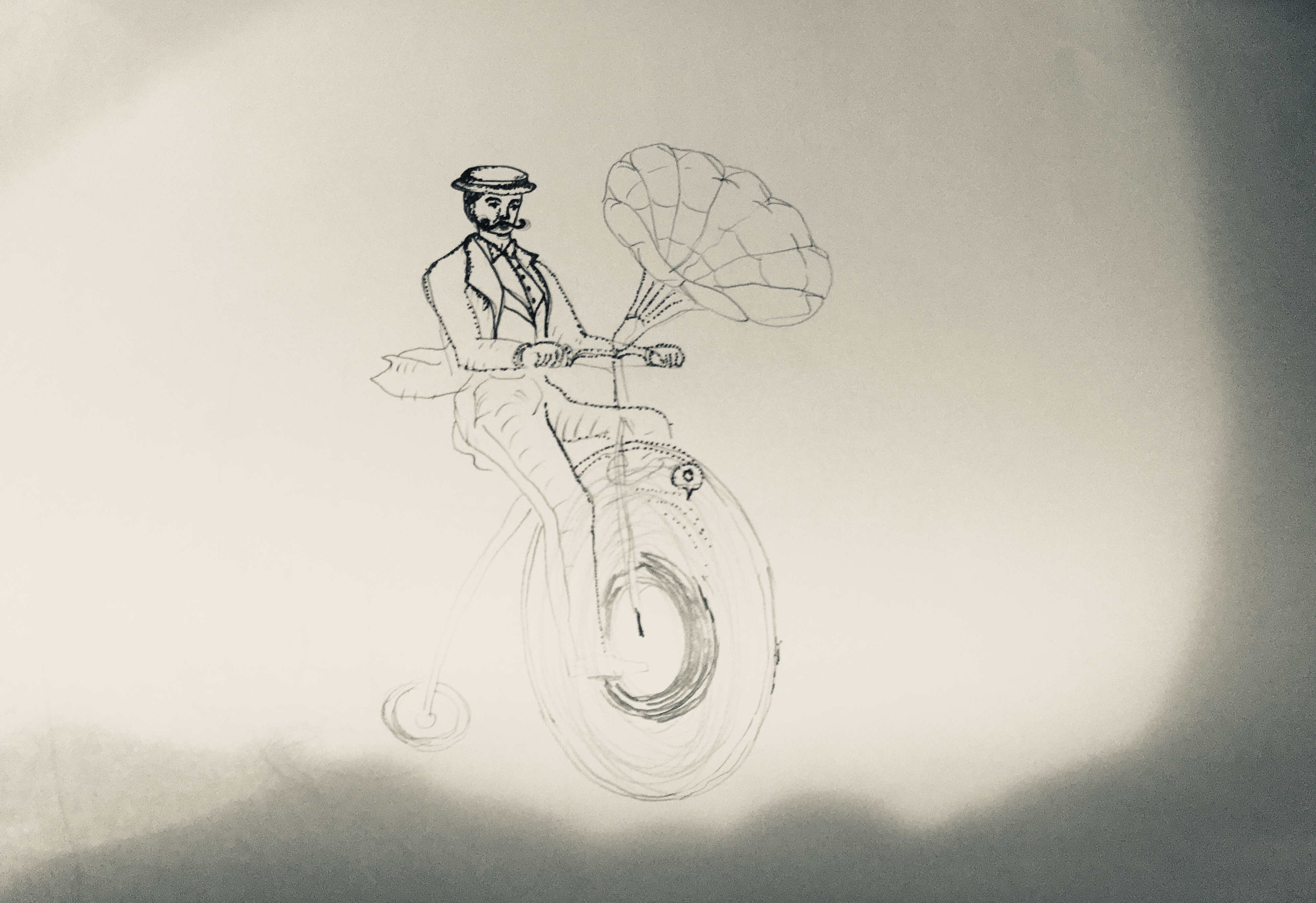 If indeed the journals are correct, he started testing and recording results from the device in a quite simple and systematic fashion, common objects, pots, washing machines, shoes. He also made extensive testing on the natural world, again firstly in a reductionist way by selecting parts of plants, fingers, nude bodies, clothed bodies.

Then he began to move onto macroscopic objects such as whole people, valleys and mountain ranges and even borderlines of countries. Which is why there are pieces titled both in Czech and Spanish as Rayon when it permitted travelled as much as he could with the device to do comparative field studies.

Sometimes the results, in the beginning, ranged from mundane to surprisingly elaborate or ornate. Each outcome from the Gramophone membrane was unique yet apparently wonderfully musical.

It appears that around 1887 The Gramophone, had, however (due to changes both in the membrane structure and to some small electrical miscalculations in calibration) begun to work in a strange yet as Rayon declared in his entry, "it works in an imaginatively Magnifique way."

Coincidently it was at this time that he had met and fell in love with Mademoiselle A. who was a volunteer from La Sorbonne during one of the experimental works on transient emotional states. Rayon even pondered whether somehow this meeting had influenced the calibrations of the Gramophone.

According to Rayon's entries, it was almost as though the Gramophone had begun to have a mind of its own and had started to generate "highly unusual fields of a discrete energetic potentiality that was not electrical but had properties of immeasurable interest.".

Apparently, although I am retaining much scepticism, objects that Rayon had focalised on with the Gramophone had even begun to levitate and fluctuate in terms of visibility.

With Mademoiselle A, they apparently even used the Gramophone installed on a bicycle for trips around the countryside of Beaune. On one of these, small trips Rayon makes the claim that they even managed to fly over a small lake whilst listening to most glorious symphonic passages.

M. Rayons last entry seems telling, "Its almost as though there is a feedback loop occurring on a physical level akin to two mirrors pointing at each other. It seems to be that the resonance of an invisible field has occurred, or is being stimulated. It as if it is being tickled. This field appears to be in flux between indeterminate dimensionalities." Indeed it is still unclear how or if M. Rayon died. In the Gendarmerie De Nice Report, there were eye witness sightings of a man riding off a Pier in with a Gramophone attached to the front of the Bicycle and disappearing into thin air.

All diving searches for his body along the Mediterranean coast could not uncover his body, the bicycle or the Gramophone.

It is, in fact, this scene that is painted by Czech Artist Katerina Hadravova for the artwork and is also the last composition of this album, Un Rayon Sur La Mer.

For the final motif, I have taken an excerpt from Rayon's studies on both the ocean, storm clouds, rays of light as well as some of the first melodic motifs from when he fell in love with Mademoiselle A.

It was my intention for this final piece to emulate his sense of the victory of the human quest for truth, love and all things honourable in the face of any challenge.  You can hear and buy this soundtrack at bandcamp here

Or at least they were put in the attic of his home in St-Jean in Les Alpes Maritimes.

New Zealand musician-cum-inventor from Oamaru, Jono Heyes happened to be in the French village when the documents of M. Rayon were discovered recently and among them were Rayon's designs for the incredible gramophone. And a working model.

Heyes you will remember is the man who gave the world the bottomless coffee cup (literally a cup with no bottom) and the 24 inch CD which could contain four weeks of uninterrupted music . . . if you could find a machine to play it.

Heyes, fluent in idiomatic French and wine drinking, struck up a conversation with the owner of the archive and was given permission to bring all the documents to Oamaru where they could be stored in a secure stone house.

While waiting for top scientists from NASA, Weta Workshop and the local Bunnings to sort matters out, Heyes has created his own music for the soundtrack, some of which is based on transcriptions found in Rayon's journals.

Of course those instrumental passages are in French but they fit seamlessly with Heyes' music which is in English.

It is a rather beautiful album of elegant strings, piano pieces and ambient restfulness.