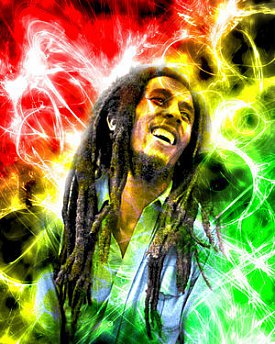 Bob Marley was quite a man . . . nobody seems to have a bad word to say about him.

Oh sure, a few wacko reactionaries got het up over the dope thing and tossed him into the Godless Heathen Corrupting Our Youth basket. But here was one spliff smoker who would run 10km before breakfast, was always keen to play a game of soccer and knew more scripture than most Anglicans.

Interesting faith, Rastafarianism – life-affirming, know your past to know your future. If Bob was the visible adherent, he was a fine example.

He loved children and wherever you look – in biographies, contemporary newspaper accounts, the rock press, considered assessments of the man which have appeared since his death in ’81 – nobody seems to have a bad word.

Quite a faith, quite a man.

And he’s with us still. A decade after his death a previously unreleased Marley track, Iron Lion Zion, went straight into the US charts at number nine and was successful worldwide.

Recorded in the early 70s, it appeared because the Bob Marley Foundation rummaged through the vaults for the lavish four CD box set, Songs of Freedom.

The stunning seven minute remix of Iron Lion Zion with Spencer Davis-sounding organ part, percussion and Courtney Pine saxophone isn’t on the set, unfortunately. To get that, you need to buy into the four-track CD single . . .but it’s worth it.

Listen and speculate: if Bob had lived, maybe . . .

But Bob live anyway and since his death he’s released some great music. Quite a feat.

The Confrontation album of ’83 included his superb Buffalo Soldier anthem (not included in Songs of Freedom, curiously). In ’84 the One Love remix (yes included) swept the charts and on the 10th anniversary of his death came the excellent Talkin’ Blues album taken from a radio shot in ’73.

Songs of Freedom arrived on no particular Marley occasion (unless we count wife Rita before the US Supreme Court accused of forging his signature). But it coincided neatly with the release of the fascinating Time Will Tell video biography of Marley (or, if you will, reggaementary?).

Box sets are getting a bit ho-hum these days. Where we once got Dylan releasing dozens of breathtakingly good outtakes and alternative versions, now we get Back to Basics, The Essential Collection by Olivia Newton John.

Truly some are more equal than others.

Whether the dread with a battered tape of Exodus could afford Songs of Freedom – limited edition of a million worldwide, approximately 1000 in New Zealand – was another matter. And many of these tracks are already available on good, remastered CD.

But Songs of Freedom is extraordinary for its sheer scope from the first song Marley recorded – the choppy ska of Judge Not from ’64, a pre-Rasta piece of biblical admonition – through to a vigorous Redemption Song recorded live at the last concert he ever played, on September 23, 1980, in Pittsburgh.

Between those two points is a lifetime of music richly deserving celebration and acclaim again. The chronological collection allows you to hear the growth of a musical genius who slowed the rude-boy ska beat and American soul influences (catch his beautiful, lonely soul vocal on I’m Still Waiting from ’65) and fashioned a unique vision in reggae music. Quite a man.

The 78-track collection is also admirably balanced and gives over fully a third of the space to his 60s years before Island Records. So we get the electrifying Simmer Down, the original ska tempo of One Love and Put It On through to the pivotal Soul Rebel, where he was embracing the Rasta faith. Much of that stuff isn’t easy to find on good-quality CD, so to have it in this context is the kind of sensible, insightful thing you are surprised marketing people thought of.

Included also (and one of nine previously unreleased tracks) is an acoustic medley with just Bob and guitar in ’71 going through This Train, Cornerstone, Stir It Up and others.

Most of the classic material is on Songs of Freedom, from the ambiguous Small Axe (chopping down a big tree may have been a reference to underdog Marley’s view of the big three record producers in Jamaica at the time) to the spook staredown of Duppy Conqueror.

Natty Dread, live versions of I Shot the Sheriff and No Woman No Cry, the long version of Jammin’ and Exodus are all here. There are also the rarities such as Jah Live, written after the death of Selassie, and Smile Jamaica, penned at the request of Prime Minister Michael Manley.

There’s a dub of One Drop and various alternate versions.

Curiously though, even in such an extensive overview, some crucial tracks are omitted: no Rastaman Vibration, Them Belly Full, Kaya or Ambush in the Night, the latter a particularly odd exclusion given the central nature of the assassination attempt it’s about in Marley’s life – a fact the colourfully illustrated, 64-page booklet acknowledges more than once.

Those omissions aside, Songs of Freedom is still a set which should be in any sensible Elsewhere collection. It will constantly ignite the converted and fascinate newcomers equally.

Timothy White – who wrote, and constantly rewrote when new information came to light, the atmospheric, fable-like Marley biography Catch a Fire – offers an intelligent, anecdotal and analytical piece about Marley in the booklet and others who knew him (Clapton, Rabbit Bundrick and more) let their voices be heard too.

Nobody seems to have a bad word to say. (Well Rabbit says the young Bob was often hitting up on his wife . . . but neither was too miffed.)

What Songs of Freedom confirms is the consistency of Bob Marley’s message.

Lennon might have penned the idealistic Imagine – but it appeared on the same album as his vicious prosaic swipe at McCartney in How Do You Sleep.

And Dylan might have written Blowin’ in the Wind or whatever – but he also spat bile in Positively Fourth Street at the same time.

There are fewer inconsistencies in Marley’s body of work. He sang always of personal dignity, good over evil, self-belief, love and get up, stand up for your rights.

“All the people on earth are just one family,” said this man who had “jus’ come to do God’s work.”

Because the message was humane and simple, people everywhere recognised it.

As White points out, Marley was a leader who didn’t run for office. But he had the integrity and courage to articulate the hopes and beliefs of people everywhere. He spoke for the many . . . and he did it through music because “the one good thing about music is when it hits you feel no pain.”

A box set assembled with much TLC. A little light on Upsetter material and a little heavy on Island stuff, which is perhaps quite understandable...given licensing issues it's amazing they were able to do a career cross-section such as this. Plenty of rarities for the trainspotters too, most of which stand on their own merits. Great booklet too.