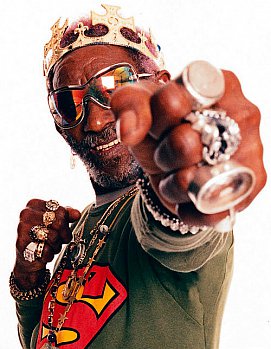 By the early 90s - a decade on from the death of Bob Marley - the consciousness reggae movement he headed was floundering internationally. In New Zealand, where reggae is one of the bloodlines, it was disappearing from radio and aside from well attended appearances by Judy Mowatt and Ziggy Marley concerts it really was “time tough,” as Toots once said.

But there was also a feeling that reggae is on the rise again. This time it wasn’t coming from the spiritually inclined or street sufferah stuff but via house and dance parties.

The gap between rap and toasting isn’t too great and houseparties were starting to play a lot of dance and dub-inspired grooves. It was there in the seriously brilliant Soul II Soul, and Souler Jazzie B did the stripped-back deep-dance remix of Look Who’s Dancing for Ziggy Marley’s EP of the same name.

When it came to the seminal reggae remix/dub/dance king you couldn’t then - and still can’t - go past one man: Lee “Scratch” Perry.

Perry was there for 50s ska and to record Bob Marley’s essential Soul Rebel and African Herbsman albums in the early 70s. And he wrote the book on reggae-pop through the 60s and 70s with The Heptones, Max Romeo, The Mighty Diamonds and others. He was also the world champion of x-ray voodoo dub (no real contenders even today) but could step back to let an album like The Congos’ exceptional  Heart of the Congos go straight to the soul.

Styles himself as an emperor, appears to have his own religion (at least one), quit music by demolishing his legendary Black Ark Studio with an axe and in interviews comes off as an Old Testament figure smashed on acid.

He’s also a genius behind a mixing desk.

Perry’s satanic and spooky Train to Doomsville from ’88 belatedly took off at student radio in the early 90s, lifted from a compilation produced by Tackhead’s Adrian Sherwood (another contemporary dance connection). And there was a slew of compilations, reissues and new albums to take the man’s name to the forefront of consciousness again. These were all good places to star on a voyage of fearsome discovery.

It remains a good collection from that period but since then Perry got Real Weird: Mystic Warrior and Warrior Dub is another cracker collection.

The spirit of Bob Marley moves upon these turbulent waters as Natural Mystic becomes Perry’s resigned, sadly remote Mystic Warrior, he dubs Those Crazy Baldheads, and Feel The Spirit is a loose, celebratory echo-heavy jive through Marley’s Put It On. The lyric Perry adds to Mystic Warrior is significant – “all things are possible to the ear.”

That’s Perry’s credo and the album hits a rootsy point as it shifts from the sleepy seduction of Jazzy Lady or catches you off guard with other world voices and sounds. And he says such interesting things.

He warns the “pirates of the airwaves to dig your graves”, tells himself “good luck, Scratchy, you gonna win a Grammy” (we should be so lucky) and later “the Monk man rockin’” (Thelonious?).

But he also talks wearily of “madman Scratch getting rid of his heavy load” and says he has nothing to show for 25 Years.

All this to deadly music. When Perry urges you from a canyon of echo chambers to “feel the spirit” you just know you are at least going to feel something.

And that’s only the Mystic Warrior album – it’s dub companion is another broody prospect again. And just as eerie. It comes together as an awesome stew of hip-hitting eyes-closed strangeness. Dub The Past (a stripdown of 25 Years) is a monster.

Perry’s other significant release of he 90s, From The Secret Laboratory, is a whole other thing. It was state-of-the art Scratch with Adrian Sherwood. Old-schooler meets dancefloor ruler with a harder techno-edge.

Perry always uses his albums to settle a few old scores or rain curses down on people like Chris Blackwell of Island records. There’s something in Scratch’s righteous malice from-the-mountain-top-delivery which comes carved in granite.

On Secret Laboratory he told the Prime Minster of Jamaica a few things and darkly said “you thought I was dead, Michael is Manley, but I came to London,” then reassures us he is “Christus” and ‘the Lion from Zion”. Freaky stuff – but all wrapped across great reggae-rock with dub affiliations.

Then again, of course, the other “pop” songs, Party Time and Seven Devils Dead (a glancing blow at No Woman No Cry) are great. But that’s Scratch for you – he always surprises. Mostly minute by minute.

Whether he’s cutting with a sharp blade, as on Secret Laboratory, or finding a way of conveying a sound which rattles the bass speakers (or literally rocks your car if you’ve got an in-auto sound-system) as on Mystic Warrior/Warrior Dub, he keeps you guessing.

Just check the dub of Feel The Spirit or his subtle flickerings of ska sounds which he peppers everywhere and you’ll know you’ve hearing a few decades of traditions distilled into some spicy spacey gumbo of sound. Like, awesome, man. Rilly awesome.

For sheer staying power, wired by weirdness, his ability to shove a bassline somewhere between your heart and gut or suddenly introduce Joshua commanding the sun to stand still, there is no one like Lee Perry.

He’s a genius and, in the way he can change the way you hear music, right up there with Thelonious Monk, Hendrix, Marley and whatever your first speed metal album was.

Hey there - in which song does LSP say "Good luck Scratchy, you gonna win a grammy!"?
Cheers
Eric

Eric: re your question about LSP: the track in which lee scratch perry says "good luck scratchy, you gonna win a grammy" is Good Luck Perry on the Mystic Warrior album (Ariwa Sounds, 1990) which came out on in NZ on a double cassette through Jayrem (with the Mystic Warrior Dun album). I guess they are available on CD.