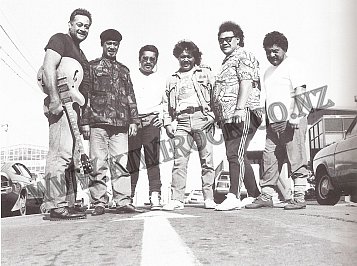 When Herbs emerged at the start of the 1980s they were a very different band from the avuncular, mainstream entertainers they became.

The original five-piece was managed by the former president of the radical Polynesian Panthers, and the cover of their landmark EP Whats' Be Happen, released in July '81 during the Springbok tour, was an aerial photo of police evicting protesters occupying Bastion Point in '78.

That alone was a significant statement, and the six tracks within were a watershed in Kiwi music.

The lyrics spoke with a righteous anger we seldom hear from our musicians. Toni Fonoti, who wrote most of the material, possessed an authoritative voice and the songs referred to the struggle against apartheid in South Africa (Azania), the realities of street life for young Polynesians (Whistling in the Dark), and some astute social observation (One Brotherhood).

It put Herbs on the musical and political map, and although it sold very little it has grown in stature since. 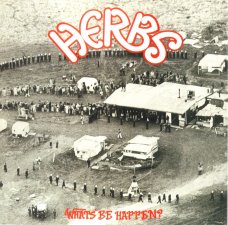 At the time the band would also play lunchtime concerts at local schools. They'd unload their own gear, play to wide-eyed teenagers and then load up the van again taking their few bucks - and for men with wives, partners and kids they were embarrassingly few bucks - without the suggestion there was any indignity in it.

Herbs were more than a band, they were a flashpoint. The kids in the hall liked them, those in the staffroom often much less certain what to think.

Herbs were special. They were in the vanguard of Pacific reggae, their multi-racial make-up meant they brought various PI sounds to bear, and they were urban Polynesia.

Their first single was a cracker: French Letter had a risque title but captured the mood of a country that had had a gutsful of France testing nuclear weapons under its blue backyard. It had an almost satirical use of accordion, a catchy chorus, and stayed on the charts for almost three months despite radio ignoring it. No matter, Herbs were on their way.

Being, by this time, managed by promoter Hugh Lynn meant they were often his first call as openers for international touring acts (Black Slate, Stevie Wonder, UB40, Neil Young). So much so that if an alternative was offered Australian promoter Michael Chugg of Frontier Touring could guarantee gales of laughter by asking, "Why? Herbs not available?"

To their cost they were a fixture at worthy fundraisers and the cynical observed they were becoming a rent-a-cause band. In the mid Eighties there were high profile tours of the East Coast and the Pacific and, despite numerous line-up changes, just needed a crossover hit for popular acceptance.

Songs such as Long Ago, Jah's Son and Light of the Pacific wrote themselves into the catalogue of local music, but it wasn't until their pairing with Dave Dobbyn in '86 for Slice of Heaven that Herbs could truly be said to have been embraced by the mainstream.

From then on, through more line-up changes and the bizarre arrival of Eagles guitarist Joe Walsh into their ranks (he co-produced the dodgy Homegrown album of 1990), Herbs were household names.

They paired with Tim Finn for his pointed Parihaka, with Annie Crummer for See What Love Can Do and Ray Columbus for Til We Kissed. In '95 they revisited French Letter, but by then the spark had faded through too much exposure, too few songs to equal their best, and far too little financial reward for the years they had put in.

Did they ever break up? Who knows, but few could hear of the death of founder drummer Fred Faleauto in 2001 or that of internationally acclaimed bassist Charlie Tumahai (who joined in '85) in '95 without reflecting on the enormous contribution to New Zealand music Herbs made.

The 19-track Listen: The Very Best of Herbs of 2002 wasn't their first collection. Warners released the 18-track 13 Years of Herbs: The Best of in '93 and because it contained Azania and Dragons and Demons from that seminal EP it is actually the stronger of the two.

Listen is fine, but favours the middle years and pop material (Good For Life) and includes the '95 version of French Letter over the original. It is Herbs through a slightly rose-tinted prism and the absence of historical liner notes (13 Years had none either) is an insult.

Herbs deserve a more thorough, well-essayed overview as befits their status. And if you doubt their place try listening to Light of the Pacific without feeling a pang of something very local.

Or track down a battered copy of Whats' Be Happen and stand in awe of their courage.

They are still going, they do a bit of touring in Queensland http://en.wikipedia.org/wiki/Herbs_(band)