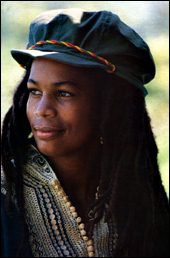 Judy Mowatt wears her unofficial title “the queen of reggae" easily. A striking figure of regal bearing, she holds her head high, and, as a member of The Twelve Tribes of Israel, talks as easily about the Queen of Sheba in ancient times as she does about Yellowman, and DJ dancehall stars in Jamaica today – and shows a canny knowledge of chart placings for various reggae artists.

In New Zealand for a lightning-fast North Island tour, Mowatt and her band flew in from Los Angeles after a bumpy and uncomfortable ride to be greeted by New Zealand members of the Twelve Tribes of Israel. She admits the sight of brethren and sistren on the tarmac lifted her spirits and was an auspicious sign for the tour ahead.

Yet it is hard to believe Mowatt would ever let her spirits sag anyway. She talks of her. music and performs it in ways which emphasise its uplifting spiritual qualities and, even though expressing regret at what has happened to reggae since the death of Bob Marley (in whose I-Three’s vocal trio she sang along with Rita Marley and Marcia Griffith), she considers herself optimistic about the future.

And somewhere in that not-too-distant future, her patient followers will be pleased to hear, is “a long overdue album."

Mowatt's previous albums. notably Black Women from '79 and Love is Overdue of three years ago, are identified by her effortless cross of soul and reggae sounds and that's what she promises for her new one – along with some very early Bob Marley songs from the late Sixties which many people will be unfamiliar with.

When Mowatt speaks and plays, as her exuberant concert in Auckland showed, the spirit of Marley is ever present and she feels the loss as keenly now as she did when he died. But today the Marley estate is a messy business, with reports of various Wailers going into litigation for a piece of the financially fat pie.

Much of that has been resolved, she says, but adds sorrowfully “for all he did for people it shouldn't be that way, but that is what has happened.

“Chris Blackwell of Island Records will be the one who will probably get the estate - all Jamaicans have mixed feelings about that. But what can you do? We just hope that his image and likeness will remain in years to come.”

Mowatt is less than enchanted by what she sees has happened in reggae in the past decade and, al-

though she bemoans the lack of international record companies paying attention like they once did, finds much of what is recorded lacking in the spiritual dimension which Marley and others gave it.

That’s why she continues to perform song like Get Up, Stand Up, and is a bearer of his light even now.

“Bob was a great influence on young people and they depended on his music for guidance and strength. But after he died the trends changed -- and I think that was deliberate.

“The DJ became the thing. Yellowman was king. This was a negative side to what Bob was dealing with. Look at what Bob - the reggae king and ambassador - took to the world and then what has been considered good music since. It is the positive and the negative and it has led youth down the garbage lane. But they've found nothing there -- and they are still searching” 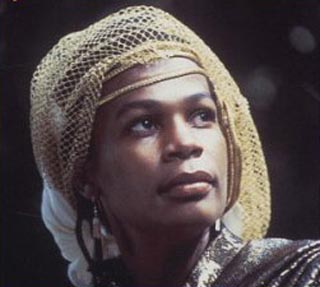 She accepts the younger generations perhaps see her and other Rastafarian reggae artists as part of an older generation but is encouraged by the re-emergence of singers over DJs which she has observed at recent Sunsplash festivals in Jamaica. If there is such a rekindling of interest in singers then Mowatt is well poised to accept the mantle of reigning matriarch, even if her clear enunciation of an equal role for women may not meet with universal acceptance in the traditionally male-dominated societies.

“It is said it is a man's world but in a lot of societies the houses are run single-handedly by women and it is matriarchal society.” she says, referring to what she observed on a visit to Nigeria which tallied with her experience of Jamaican society.

“In many places the woman still has to walk seven steps behind her man and is economically and emotionally dependent on him -- but she's the one who does everything while he gets the praise and walks around with his walking stick. But there are many women’s organisations which are rallying points for women and we can see thing changing now.

“The Queen of Sheba was queen of land from Ethiopia to the borders of India and her role was not demeaning to men. The women [then] were militarists, they worked alongside men in those ancient times . . . but in the West today the man gets agitated if he sees power going to a woman. But if a woman deserves power, she should have it.

“I am yet to see a world where men and women can work together equally for the betterment of humanity without one feeling that the other has too much power."

Mowatt feels that time will come, however, and music can be part of the process of making it happen.

“Music has to have the ingredients to unite the peoples of the world and music can play a part in that. We invite one and all to come and listen to our music and be a part of it, because we want to bring all people together."

It is a message which she emphasises in concert and, if the good feeling at her Auckland concert is typical, one which she is succeeding at getting across. It is a thoughtful, relaxed concert with plenty of upbeat grooves for dance. But as a mother of five children growing up in a country now raddled with cocaine abuse and violence, Mowatt is not so naive as to think the healing power of music is enough of a code to live by. Her Rastafarian faith is a powerful one and she passes that to her children.

“I try my best to inculcate Christian principles in my children because if they have that fear of God they'll know there is a commandment against the negative things we experience.

“If they have love and fear of God they will not get involved in these things. Even if they should depart from what you have taught them, they can later reflect on what they’ve been told.

“That faith never leaves you."

Great piece about a lovely woman. I recently discovered Judy Mowatt's back catalogue and have been amazed at the depth of her talent. Judy and the I-threes were so under-rated - they somehow completed and softened the raw Marley sound, and some of her soul work is as good as her hero Aretha Franklin....I wish I'd seen her live...