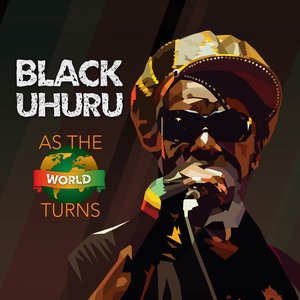 In the late Seventies and early Eighties Black Uhuru out of Jamaica were one of the most important and convincing reggae outfits on the planet, delivering righteous albums on Island Records and spoken of in the same breadth as Bob Marley while bringing an edge of electronics into the genre with Sly'n'Robbie.

The classic line-up was Michael Rose, Puma Jones and the band's founder Duckie Simpson. Their four albums Sinsemilla, Red, Chill Out and Guess Who's Coming to Dinner between '81 and '83 would be in any serious reggae collection.

From the mid Eighties only Simpson remained with a revolving door of others which included Junior Reid, Don Carlos and session players.

As The World Turns is the first studio album under the Black Uhuru name in over 15 years although versions of them with Simpson have remained a live act, and it is Simpson here who takes on lead vocals.

While little of this reaches as deep and dark as they frequently did at their peak there is some strong stuff here (War Crime which is lyrically more serious than the light musical touch brought to it) and they still know their way around a memorable pop-reggae connection (Stand Alone, the easy skank of Betrayal, Ganga Baby).

They also continue their engagement with technology (this sounds very crisp), bring in Agent Sasco for some gruff dancehall toasting, and nod to the masters courtesy of Peter Tosh's Jah Guide, Marley's Stand Alone and African Herbsman (as the variant Jamaican Herbsman), and Junior Murvin's Police and Thieves pitched somewhere between Murvin's soulful version and the Clash's more aggressive stance.

It is mostly softer than hardcore fans would like but that was then and this, thirtysomething years on, is now.

Most of these songs are of re-recordings of material laid down five years ago but which went unreleased and while this doesn't command the same sense of awe which their earlier work did it is a very respectable outing from a name with a heritage, and an understanding of what consciousness reggae can be when it acknowledges that history.