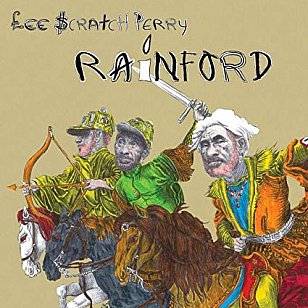 On his 1986 album Battle of Armagideon, the great producer/mixer/ dub magician and studio alchemist Lee “Scratch” Perry opened with Introducing Myself.

By that time he hardly needed to, for more than a decade he had been legendary for his approach to a recording studio and had delivered early classic Bob Marley albums, Max Romeo's essential War ina Babylon and Heart of the Congos by the Congos, Junior Murvin's Police and Thieves (and produced the Clash's version) as well scores of his own material, some of which was punctuated by screams, shouts, a baby crying, massive dub effects, his odd ranting and raving and . . .

On the Battle of Armagideon there was also his track I am a Madman, but Scratch isn't. He's astute, a trickster and myth-maker. He's more like Salvador Dali who said, “the only difference between a madman and myself is that I'm not mad”.

Any new Scratch album is always going to be interesting at the very least.

Rainford – which is his first name, he's actually Rainford Hugh Perry, the “Lee” was a nickname and “Scratch” came from his Chicken Scratch dance hit for Bibi Seaton in the mid Sixties – arrives as Perry recently turned 83 and there's no sign he's getting any more straight-line or turning down the eccentricities.

The opener is Cricket on the Moon and as it veers between electro-beat reggae, his own brand of mysticism, deep echoed dub treatments and something which sounds like Yoko Ono suffering a dreadful bout of constipation and cricket on the moon it is . . .

Again with his collaborator, acolyte and editor Adrian Sherwood, Scratch – aka the Upsetter – sends wrongdoers on their way (the skanking Run Evil Spirit), invokes Spiderman and Superman, namechecks Jesus Christ, Paul McCartney and Punky Reggae Party (the latter three on dense, driving apocalyptic Let It Rain), delivers something akin to downbeat dub-pop on House of Angels with a female vocal group on the hook, the classic reggae drum and bass of Makumba Rock comes with someone crying uncontrollably and mentions Prince Charles being King. . .

Well, this is Scratch and he isn't called the Upsetter for nothing. He's a disrupter, shapeshifter, musical mystic, space and time traveller (the hypnotic African Starship) and sonic illusionist who knows you needn't make sense to impress.

And the closer is the seven minute Autobiography of the Upsetter which serves to remind of his genius and sort of takes you full circle on his Mobius Strip/Gordian Knot back to that Introducing Myself 33 years ago.

He packs a lot of information, effects, madness and genius into just 42 minutes.

Extraordinary, however you cut it.

There is more on Lee Scratch Perry at Elsewhere here.