THE CRITIC REVILED (2013): With Ringo and BB KIng reviewed 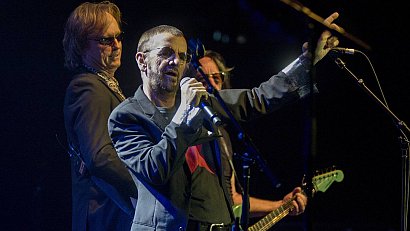 There are many perils in writing reviews: you might report a song title incorrectly, you might misname a member of the backing band, you might get abuse and threats in a bar afterwards . . . sometimes many years afterwards, especially from a musician who feels you didn't accurate report their particular genius.

The internet has actually helped the hapless reviewer, people can now pour their venom out after a bottle of wine and that would get it out of their system.

I got considerable negative comment for my review of an embarrassingly awful show in Auckland by poor old BB King who couldn't remember the names of some band members, brought on his manager and some family members and generally showed how he was being bilked by them to just keep getting up and doing it again for the payday, even if he was clearly past it.

One comment said they just felt blessed to be in the same room as him, which is fine but frankly my feeling is if you pay to see a musician perform you have every right to expect that is what will happen, and the legend be damned.

I made the same mistake when I reviewed a show by Ringo and his All-Starr Band when they played in Auckland.

Apparently I should have just been grateful that I/we were able to see a living legend.

I agree, Ringo is a legend and in his day a great drummer . . . but the show was like a parody of an all-star show and Ringo didn't do much either behind the kit or when on the microphone.

The nasty comments just kept coming and I was accused of being a Beatle-hater (Huh? Nothing could be further from the truth) and just always negative (also not true).

But the show wasn't much cop and as reviewer it was my job to say as much. And I did.

This is what I wrote. Not that bad, surely?

The more harsh BB King review from 2011 is below that.

Ringo and the All Starr Band, Vector Arena 2013

Given that previous incarnations of Ringo's All Starr Band included members of The Band, Joe Walsh, Nils Lofgren (a one-time solo act, now of Springsteen and Neil Young groups), Ian Hunter (Mott the Hoople) and other luminaries, this line-up looks like the B-team.

Although they have fine pedigree - Todd Rundgren (who played an indifferent and undersubscribed show here in late 2010 which I also said unkind things about), Steve Lukather (session guitarist and founder of Toto), Greg Rollie (the keyboards and voice of early Santana, then Journey) and Richard Page (of short-lived 80s MOR rockers Mr Mister) - just don't have quite the same cachet.

And their diverse backgrounds made for a show which spun weirdly from 60s nostalgia (Ringo with Honey Don't, I Want to be Your Man, Yellow Submarine etc), Latin-flavoured rock (Rollie taking lead for Santana's Evil Ways and Oye Como Va) to 80s FM radio (Toto's Rosanna, a flat treatment of Africa, Hold the Line, and Mr Mister's ballad Broken Wings). Into this was squeezed Rundgren who presumed his songs (the great I Saw the Light done a disservice) better known than they are.

Holding this together, however, was the trim and healthy 72-year-old Starr who provided humour ("What's my name?") and singalong songs.

Constantly flashing a peace sign, he kicked things of with It Don't Come Easy, joked that only four people bought his last album Ringo 2012 (then unfortunately sang the reggaefied Wings from it and later the dreary if well-intentioned Anthem).

He introduced Boys as a song "from that other band I used to be in [loud cheering] ... Rory Storm and the Hurricanes" (a reference to his pre-Beatles band) and such quips - doubtless well practised - were appreciated.

But any show which gear-changes between rock 'n' roll (Boys), pub singalong (Yellow Submarine), Black Magic Woman (Lukather shining in a such setting), the countrified Honey Don't, the leaden Anthem, a new ballad by Page then into Toto's Africa, sounds like a setlist programmed by someone with a short concentration span. The musicianship was (mostly) undeniable but too often this came off as a very good covers band "featuring the original artists", which I suppose it was.

Ringo must have felt the love as the audience sang along to his melodically simple and lyrically memorable songs (anyone can hold the tune of Act Naturally and enjoy bellowing With a Little Help from My Friends).

But in a stop-start, stand-sit-stand again show nothing gelled for any duration.

So, an unusual and interesting show.

Interpret that as you will.

Few things are more sad, uncomfortable and disappointing than witnessing a once-towering talent in its decline.

But for more than half an hour after he arrived to a standing ovation, B.B. King barely played a note or sang, but rather made a prolonged and rambling introduction of his eight-piece band (embarrassingly mixing up names) and brought out his two managers (really?), offered a short flicker of blues, then was distracted again when he began introducing and talking about family members in the audience.

And throughout the night he punctuated the short and often incomplete bursts of music - his singing still powerful, his guitar playing a shadow of the fluidity and mercurial style that is his signature - with missed cues, comments to the band and anecdotes that didn't quite go anywhere.

Sometimes this seemed like an open rehearsal - about 65 minutes on stage, much of that not actually playing, the band comping uncomfortably behind his chat.

By the end, when he was inviting the audience to sing You Are My Sunshine and offering When the Saints (twice), it was clear the great King - who reminded us repeatedly he was 85 - was doing this for the adulation and the applause, scattered though it was at times.

We were in the presence of a genius, but what had made him one was conspicuously absent most of the night, other than when he played raw but truncated versions of Keys to the Highway and a New Orleans-styled See That My Grave is Kept Clean.

The night had begun well with a typically commanding performance by Paul Ubana Jones, whose big voice and enormous acoustic playing filled the hall (Rest in My Arms and his rejigging of Norwegian Wood the standouts). The concert highpoint was the powerful Ruthie Foster and her band ("three dreadlocked sisters from Texas") who delivered joyous gospel, the soul sound of Motown and Sam Cooke, some Texas blues and snatches of funk which won them a roaring standing ovation.

Someone should sign them for a return visit right now; they were thrilling.

But as for the big man? Glimpses of what once was, but otherwise just sad to witness.

Still, he got a standing ovation and stuck around dispensing guitar picks and enjoying the adulation.

Maybe that's why he still does it at 85. 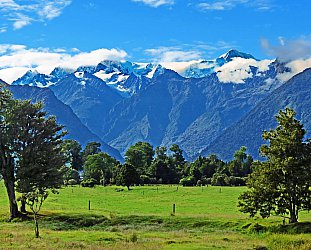