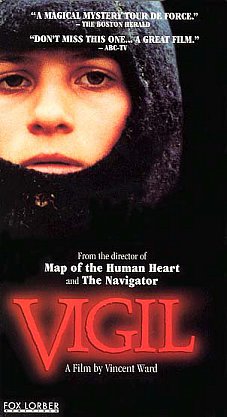 I honestly thought that the new Keanu film The Day The Earth Stood Still was the worst movie I had seen in decades, then last night we saw Australia.

Far be it from me to be a spoiler -- and please go see it, if you must -- but we thought it the most trite, sentimental, predictable, cornball, overblown epic ever. And I've seen some clunkers from the Fifties -- which stand up better for their sheer camp value.

About 10 minutes in when Hugh Jackman gets under a bush shower in a scene that looks like a commercial for a new shower gel with gay appeal -- and Nicole eyes him with the kind of cliched shock that only an English gentlewoman can muster -- I turned to Megan and said, "Can this get any worse?"

It did. For another couple of hours. And then some. (Tip: take a packed lunch.)

It also comes with a patina of A Very Serious Issue as it bookends the marathon with something about the Stolen Generations. Insulting, but nice to see Jackman desegregate a pub just by being steel-eyed. If only MLK and Mandela had thought of this approach.

I think Australia is a truly awful film on every level -- it's a rare one when you can not only predict the next line but also how the next scene will be staged and shot -- but as I say, don't let me spoil it for you. You might even like the Impossibly Cute And Obligatory Kid (The Day The Earth Stood Still has one too) and the sentimental use of The Wizard of Oz. You might even think the characters who are drawn with cartoon simplicity (bad man, wise Aboriginal etc) and the appallingly bad matte painting of the scenes in Darwin are deliberate and therefore delightfully kitsch.

This film was expected to bring droves of tourists to the Outback and Darwin (I've been, you should go despite the movie, it's worth it) and although it's early days that looks like it might not happen as the film could tank at the box office in the US and Oz amidst indifferent reviews. There are hate sites about Kidman (cruel and unnecessary I think, she will have to live with this film and that should be punishment enough).

Oddly enough director Baz Luhrmann undersells the spectacular Outback aside from a couple of chopper fly-over scenes. Maybe he was saving the footage for the ad campaign Tourism Australia got him to do for around A$50 million. Might be a case of the ads being better than the film.

Anyway, I started to think about what an epic called New Zealand might look like. Given our "cinema of unease" history I see it panning out like this.

It is the late 19th century and Lady Jane Champion from Rutland has to rush to New Zealand where her husband Vincent has been injured in an accident while breaking in land near Wardville on what was Maori land.

The first three minutes deal with her six month journey to New Zealand and the hardships on the way: on the ship a woman dies in childbirth, a drunken sailor throws a little boy and his cute dog overboard and they drown slowly, a mysterious Maori man inhabits her dreams and she wakes up screaming . . .

Lady Jane arrives in Auckland and for a few days stays in a boarding house run by a woman who plays divine piano and performs abortions on the side. A woman dies during a procedure. Another two women in the boarding house are secretive lesbians who have murdered the husband of one and now live with the shame. It rains a lot.

One night the husband of the woman who owns the boarding house comes home drunk again, beats up his wife, and cuts her fingers off with a butcher's knife. The lesbians kill him. Lady Jane witnesses this and flees in the rain.

She heads down to the farm where her husband is now slowly dying surrounded by a pinch-faced Bible-quoting pastor, and sympathetic and handsome Maori -- and one who looks suspiciously like the man in Lady Jane's dream.

The farm is on the picturesque West Coast. Denniston in fact where it rains constantly and women die in childbirth. Children work in the coal mines, men get drunk and beat up their wives.

Vincent dies, Lady Jane decides to stay and work the land with the help of a young artist called Colin who has A Dark Secret and paints landscapes of black mountains and grey skies. He never speaks. It rains constantly.

A sullen Maori man called Heke is carving a canoe for reasons which are never explained.

A dark stranger arrives in Denniston. We see him kill some chickens.

The pastor berates Maori for their godlessness, Heke kills the pastor and pushes out to sea in his canoe. He drowns.

A little girl disappears from a nearby village and suspicion falls on Colin. The moronic looking villagers surround his hut intent on killing him and only disperse when Lady Jane appears and speaks to them sharply.

The mysterious stranger confesses to murdering the little girl and is thrown down a mine shaft by the villagers, a woman dies in childbirth while calling out for husband who turns out to be the pastor, there is a mine accident and many children are killed, Lady Jane and Colin help the survivors and fall in love -- but he dies the next day of influenza.

At the end Lady Jane is standing on the farm when the mysterious Maori man appears and smiles at her. She smiles back and knows she's found her home at last.

The rain stops.
Then it just fucking buckets down again and the village is washed away.

It's called New Zealand -- and it has been in a cinema near you. Far too many times I suspect.

PLEASE make this wonderful film "New Zealand", or at least the Conchords could make an episode out of it. This is too funny to lose.
Cheers
Maurice

Yes,I trusted the reviews and didn't bother to spend hard earned on it. But friends hired the dvd recently and were amazed at how bad it is.
I would like to know how this process of self delusion occurs with film makers. Is it a case of 'Emperors New Clothes'? These people go on courses, make lots of movies, watch even more presumably, the actors must have a feel for it during the process - is there no procedure to abort the worst ones and use the money for something else?