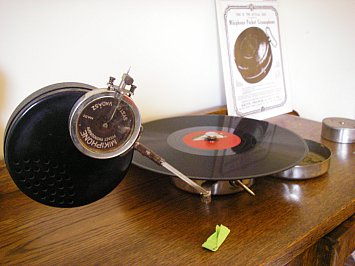 I confess to being a hoarder. Nothing embarrassing like bottles, matchboxes, or beer cans. I collect art objects. Well, records actually.

Over the decades I've scrounged through junk shops and school fairs looking for that first Sadistic Mika Band album, things by Sam the Sham and Pharaohs, Japanese psychedelic rock from the early 70s, spoken word albums from the 40s, Gracie Fields' singles ... Just the usual stuff. My walls bulge with the likes of Father Guido Sarducci's "Live at the St Douglas Convent", the Addicts (reformed junkies singing songs of praise, and recently voted worst or weirdest album of all time by Q magazine) and the Alfred E Newman "Mad" album.

Feeding the habit hasn't come cheap - all that shoe leather if nothing else - but some years back I made a great leap backwards and bought a wind-up gramophone ? and locked into something completely different and full of pleasant surprises. It was like a time-tunnel to another, more innocent world. Certainly one more crudely recorded anyway. It's not one of those large, extended-trumpet affairs with a dog peering down it, just a simple wind-it-up and drop-on-the-disc gramophone. I don't even know the year it was made.

My modest machine is a Sonora ("clear as a bell" it extravagantly claims) with an Avonia "Swiss Made" sound box. The sound is scraped out of the grooves by a vicious looking steel needle and travels up into the "sound box" which deflects the noise onto the metal lid. No volume control, no knobs to fiddle ... what's in the grooves is what you get. Plus crackle.

Now some folks get all huffy about sound quality and surface noise but I'm with Iggy Pop who, back when CDs first floated into view and people banged on about the pristine sound, memorably barked: "Life has surface noise!" Current sound equipment is pretty fragile and disposable but my solid Sonora packs up into itself to become a solid metal suitcase that also holds 10 crusty old 78s. Consider it a larger, heavier, more inconvenient and limited-capacity iPod if you will, but it's ideal for picnics. My very own meadow-blaster.

The 78rpm habit is cheap. My "system" only cost about $100 and the records are no great outlay. Most often you don't even have to buy them, any number of people are desperate to unload Ed Ames records on you. Usually if you are in a junk shop - the hospice of the discarded 78 - and the owner spots you crouching over the fragile, musty-smelling pile it's, "Five bucks the lot if you're interested, mate".

Naturally 78s snap easily so you have to be careful, but it depends on how serious you are. I try not to let too many go on me but if it happens, it happens. I was upset to lose "Raunchy" by Bill Justis and His Orchestra (the tune that George Harrison played to Paul and John to secure himself a place in the Beatles), but it was a disposable pleasure anyway. For the philosophical among us their fragility requires the zen quality of non-attachment to them, and tells you something about the transitory nature of art, if not existence.

Most of the records are terrible anyway. But I suspect the ratio of quality to crap is about what it is today. Although there's some real bad stuff out there. Jimmy Durante croaking "The Day I Read A Book" and "I'm a Vulture for Horticulture", the irrepressible Jean McPherson, the Mills Brothers ... And my copy of the Four Aces singing "Mr. Sandman" is only relieved by dirt in the grooves which make it come out something like, "Mr. Sandman, I'm such a lug ... Mr. Sandman, bring me a drink . . ."

They made a lot of novelty records back then: Stan Freeberg blowing bubbles through a straw, and the hilarious "He Holds the Lantern While His Mother Chops the Wood" by the Knaves "with novelty accompaniment".

And the group called Max Hansen with Hans Peder Ase and His Orchestra. Can you imagine what that might have looked like on a picture disc? However the good ones: solo cello by Pablo Casals, the genius of Paul Robeson, Tennessee Ernie Ford singing "Shotgun Boogie", Louis and Ella, Mario Lanza, Fletcher Henderson . . .

Then there was the craze for Hawaiian music in the late 20s and 30s. There was the real thing from Sol Hoopi (almost impossible to find but worth the search), and the unlikely sounding but genuine Ray Kinney and Dick McIntyre with His Harmony Hawaiians.

These are treasures indeed. And all come with the sound of bacon frying. Few 78s have dates on them, the long-gone record companies often obscure, and the songs by second-tier performers who will never make it to Google.

So you just enjoy them in their splendid, cultural isolation.

I don't search out particular discs but would like to hear again Miklos Rosza's theme to the film "Lost Weekend". It was banned in its day becauseit allegedly engendered feelings of deep depression in the emotionally unstable. Like Joy Division, but orchestrated.

Recently a friend came over with his young son while I had the old Sonora out. He'd never seen a vinyl single let alone my archaic machine.

He asked in that genuine, if foolhardy, spirit of inquiry some kids have.

So I told him: long before iPods, downloading, CDs and DVDs, before stereos, before radiograms ... Poor kid, but he hung in there.

"What do you call them?"

"Yeah? Grandma's got a whole box of them in her garage."

So wind me up and let the lo-tech set me free.

Hi Graham, glad to hear you are a wind-up enthusiast too. I started with a big brass horn HMV, which is an Indian repro apparently, and a beloved copy of Hoagy Carmichel doing Hong Kong Blues. I lucked onto a huge collection of jazz/blues that included lots of early Louis Armstrong and Jelly Roll Morton but also gems such as Ma Rainey and Leadbelly, so I have been quite selective about any additions since then. No job lots and yes, the ratio of good to bad probably hasn't changed much. My strike rate is about 1/50, unless I happen upon some ones collection like I did in Paeroa, Gene Vincent's Be Bop A Lula being the standout from a bunch of early rock and roll 78s plus a pre-Jerry Lee r'n'b Whole Lotta Shaking by the Deep River Boys. I came across Sol Hoopii because he covered Stack O Lee blues. Ive only lost one to breakage; Pinetop Smith on Brunswick doing I'm Sober Now from 1929, most unlikely to be replaced.
Is the theme to The Lost Weekend called that? I'll keep an eye out for it in my occasional shuffle through dusty piles.
Cheers
Brian 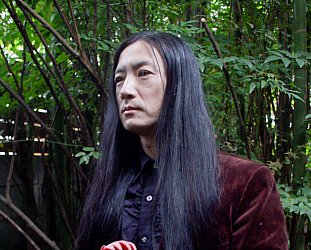 The name Merzbow is synonymous with noise. In fact Merzbow – aka 56-year old Masami Akita – might be Japan's pre-eminent noise artist. Since the late Seventies he has – under a... > Read more