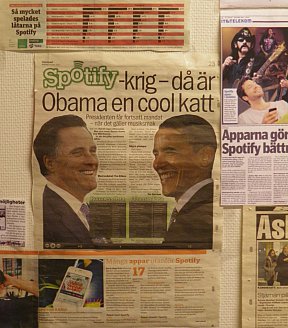 The ambience of the Stockholm headquarters of Spotify – the world's fastest growing online music streaming service – isn't what you might expect. No skateboard-riding computer nerds giving high-fives and blasting some cutting-edge soundtrack as they chug energy drinks, no rowdy office banter around the coffee machine.

If it weren't for a few handsomely framed photos of musicians on the walls, these offices – no music audible as the under-35s stare into computer screens on tidy desks – could easily pass for an insurance company on casual Friday.

“It's a Swedish thing, they're more quiet,” says expat-Brit Jim Butcher, a former journalist and PR man who has been Spotify's head of communications since a few months after the company's launch in October 2008.

“In summer we'll move into some awesome 2.0 office, hopefully with a pool table, some bean bags and the whole malarkey. But for the moment this is where everything comes out of Spotify.

“London is head office and mainly sales and management, but this is where the developers live. The bulk of our recruitment is developers, there are about 300 here. People here are very humble and no one is earning big bucks, but we love what we're doing and think it's special.”

What Spotify has been doing since Swedish founders Daniel Ek – now based in London – and Martin Lorentzon started developing it in 2006 is to legitimately stream music.

Spotify is now in 16 countries including the big markets of the United States and Britain – it launched in New Zealand a fortnight ago – and offers three tiers of service. Anyone with a credit card and Facebook account can get the free streaming service which comes with radio-like advertising occasionally between tracks, pay $7.49 a month for the ad-free Spotify Unlimited or opt into the Premium account at $12.99 a month to get music on and offline across a number of devices.

The trend has been 20 percent of those on the free service move to pay platforms.

There are free apps – ironically the most popular is Tune-Wiki which syncs lyrics for the karaoke experience – and user are encouraged to develop their own, and make and share playlists just as Rolling Stone magazine, The Guardian, radio stations and record companies do.

With around 17 million tracks available across all genres, it is an impressive catalogue . . .

This article (in an edited form) apeared in the Listener. To read the rest go here. There is a "user experience" of Spotify here. For more on how to join Spotify go here.