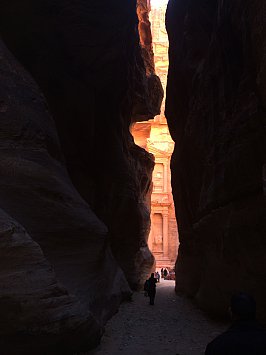 Hamad suddenly pulls us aside in the canyon between towering rock faces and says, “See” as he points to a gap in the path ahead. “This is 'Wow', right? Indiana Jones, yes?”

Well yes, it is wow and Indiana Jones because through the corridor of sheer stone we can see that breathtaking building carved from solid rock which appeared near the end of Indiana Jones and the Last Crusade.

But actually this is Petra in southern Jordan, one of the great archaeological sites and sights of the world. Here the Nabateans repeatedly fended off the Roman Empire before falling to their superior might, and within this secluded place surrounded by mountains a city grew up which – over centuries – was eventually abandoned after earthquakes shook its foundations.

Petra all but disappeared until the early 19th century when the Swiss explorer Johann Burkhardt befriended local Bedouins and learned the way into it through this narrow canyon.

Petra is one of the must-see places on the planet and most visitors to Jordan have it their number one priority.

However it is also a film set for modern travelers whose world view is often shaped by movies and television.

We live in the country of Lord of the Rings and The Hobbit so are not unaware of how these blockbusters have defined New Zealand tourism. The characters appear on our stamps, the side of our national carrier and we are forever being bombarded with statistics about how these films have been good for tourism.

Movies and television can create places, and we want to go to them. And often it's not the travel shows which affect our decisions.

In the Twin Cities of Minneapolis-St Paul people go to Nicolett Mall and mimic Mary Tyler Moore throwing her beret in the air (or visit the house used as the exterior of her apartment), in NYC there are Sopranos tours . . . and was Dan Brown's Da Vinci Code the best thing that ever happened to curious Rosslyn Chapel just outside of Edinburgh? It's certainly done such a booming trade since the book and movie they've been able to do long overdue restorations.

The Hawaiian island of Kaua'i has been used for so many movies it has 4x4 tours so you can stand at the gate of Jurassic Park and where Elvis got married at the end of Blue Hawaii. Of course we should see important places and tourists traps because they have Great Cultural Significance or are Just Very Cool.

But even they come with visual resonances . . . like Monument Valley (John Ford westerns), the Eiffel Tower (A View to a Kill), the Petronas Towers in Kuala Lumpur (Entrapment with Sean Connery and Catherine Zeta-Jones, right), the Burj Khalifa in Dubai (Mission Impossible IV: Ghost Protocol), Mt Fuji (Tom Cruise again, in The Last Samurai with Mt Taranaki doing an excellent stand-in job for Fuji) and the Empire State Building (choose your King Kong).

How many people would have known of abandoned Hashima Island near Japan if it hadn't been for those scenes in the Bond flick Skyfall? (Although it wasn't the real Hashima, just CGI and sets, and was located near Macau for dramatic purposes.)

So is it Brideshead or Castle Howard, Downton Abbey or Highclere Castle, Hogwarts or Alnwick Castle?

Films and television shape how we see the world, and tourism has consequently been affected. People actually visit the set of Coronation Street because it has been a real place for them all their lives.

One afternoon in Hastings on England's south east coast, a woman pointed to the door of a corner house and said, “See that, that's where they film Foyle's War. He comes out that”.

I'd never seen that television programme, and still haven't.

But I've got a photo of the door.

Went to Petra last year, awesome place, cold as (snow just melting), empty as (fear of Islam), recommend it to everyone. Same deal in Cairo (24C, no snow!).
I have no interest in tv/film tourism but if that;s what gets folks out of their armchairs it has to be good. 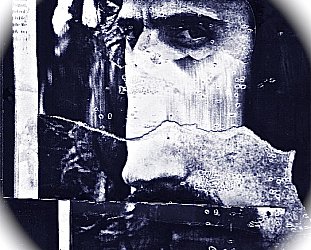 Aside from being a composer and performer who crossed, or more correctly ignored, boundaries between musical genres – his catalogue includes everything from doo-wop to classical albums... > Read more