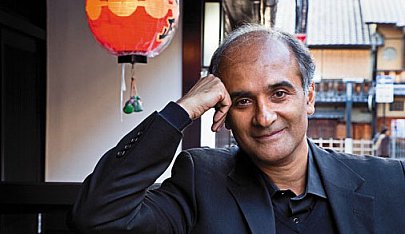 When the writer Pico Iyer came to New Zealand for a Writers and Readers Festival in 2007, it was my pleasure to host a panel on which he was on where the subject was travel writing.

As one who had done this travel writing thing with varying degrees of success I was as interested as anyone as to what ideas these writers (international and local) might be able to pass on.

The local writer seemed to only want to promote his high adventure television show (he mumbled a few words and then spun the showreel of daring-do on the side of an active volcano and chasing tornados) and for the life of me I can't remember what Iyer said at all.

It was his demeanour – quiet, thoughtful, polite and more questions than answers – which made the strongest impression.

I must have done an interview with him (prior to his appearance perhaps, I can't remember) because in my files I recently found this extract about his relationship with Leonard Cohen. Given Iyer's nature and intelligent curiousity I can see what these two men might have been drawn to each . . .

I was going to wait to ask you about Leonard Cohen but he keeps popping up.

He does keep popping in.

Start from the beginning: What's your connection to him?

Like many people, maybe you, I was a devotee growing up. I remember when I was 17 I went to India, really for the first time, for three months and all I had was an acoustic guitar, a very worn copy of his first album, and the dream of becoming the Indian Leonard Cohen.

I would traipse along with long hair, English boarding school, and every time I'd see a beautiful Mogol garden I'd sit down and strum something horrible and try to create some moon/June terrible verse to replicate him. I was a fan for a long, long time. 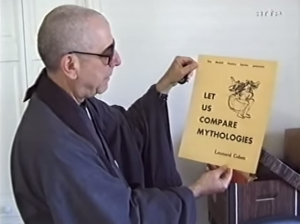 Then in 1995, to my delight, a magazine asked me to spend some time with him in his Zen temple where he'd gone on retreat because I had written a book about Japan and Zen. Since then, because he's such an open, generous and humble man, as his monk-ly robes would suggest, disarmingly so. It's almost shocking when people meet him how much he's left Leonard Cohen the celebrity behind.

He presents himself as somebody who just wants to look after you and tend to you anonymously. He was really nice enough to keep up the connection.

I reviewed his album in 2001, Ten New Songs, and I think he liked that piece.

I think it's mostly because maybe two reasons.

One is he's such a literary person at heart. As you know, he began his life as a poet and he's always hungering for a literary appreciation for his work, not just the typical music critic response. And also he doesn't know so many people who spend a lot of time in a monastery and that seems to make a connection whereby I could understand him in a certain way that made sense to him. Of course he's ... like any charismatic person who's been in the public eye for 40 years but more than most he exerts such a fascination for people.

He, like the Dalai Lama in a different way, has set up such an elaborate screen of myths and projections. When people hear the words Leonard Cohen they think of all kinds of things but probably not of the monk or the poet. Maybe he was glad to have someone respond to that.

I was disappointed he didn't come here. Did you travel with him?

I didn't but I saw a couple of the concerts. 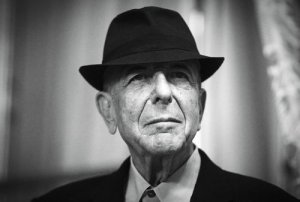 I heard they were both artistic triumphs and rapturously received.

Rapturous. I've never seen anything like it. I went to see the first concerts in Toronto, which were the start of the official tour, and for Leonard Cohen to return to a big arena in Canada is like the Pope to show up in St. Peter's square or whatever it's called. He only had to come out onstage and the whole place was up, and then regularly after every song. It was very touching.

I've never seen such an intimate connection between an audience and a star onstage. I think that's because his skill at demystifying himself and creating that air of intimacy, even in a big arena. I thought a lot about what it is that holds people so about his work and I think there is a pitiless, unsparing honesty that very few writers in any form can conjure up. I more and more think that he is one of the enduring poets of English literature. I would put him right next to Emily Dickinson.

Do you think that his performing aged well? He is a spare arranger and his voice is not considered classically beautiful and maybe sounds better now than it did when he was younger.

That's a very interesting point and makes a lot of sense to me. I think it's also that he's sitting apart from the time and that he's singing to the tune of his own drummer. I think what people respond to is a composure and a wisdom to his delivery that we're not accustomed to seeing even among his contemporaries like Bob Dylan. I think they feel that he's not trying to keep up with the moment or traffic in the latest MTV styles or playing elaborate games of that kind.

He's presenting himself almost as a monk in prayer on the stage and that cuts through some of the stuff I was saying we're so tired of. We feel more and more manipulated by image and more hostage to the moment and he's not about moment and not about image.

And yes his voice, which was always a little uncertain, is now more hauntingly uncertain. When I play it in Japan my Japanese wife runs out of the room holding her ears. She says 'this is just Buddhist chanting. This is like going to a Zen temple.' (laughs) And she's right. That has a certain appeal now. 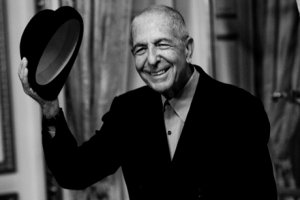 The arc of his career is so interesting. He began as the bright troubadour romantic and then in the Seventies his songs were all about self-hatred and being messed up and lost and then he went into the Zen temple and came out with these very worldly songs, First We'll Take Manhattan,, almost like a prophet returning to the mountaintop.

I do feel, and maybe it's just my prejudice, that those years as a monk prepared him for being able to come out in the world and an extraordinary collected energy that almost no other musician can command.

One reason the concerts were so successful was his transparent humility. We're not used to a performer thanking the audience over and over and not trying to hog the spotlight.

As far as putting him in the pantheon of poets, I've read comments from him that writing is a very painstaking process for him and he wants to make sure to get it right.

Yes, exactly. I remember when I was staying with him in the Zen temple in this little rickety cabin on the mountainside and he had all these notebooks up there and he pointed and said those six notebooks are one song.

For something like Halleluyah he wrote 80 verses and recorded four verses and he sometimes sings a version with two different ones so he's employed six out of the 80. I think that perfectionism, that absolute meticulousness that you see in his dress and his presentation of himself, means that he'll continue to make minor changes in a song even after it's recorded.

He approaches life as a poet and I think he's almost unique in the rock and roll domain in that there are many people like Joni Mitchell and Bob Dylan and subsequent ones who have a great gift for poetry but are musicians first. I see Cohen as being very similar to Thomas Merton.

I was just up at the monastery reading Merton and it's word for word similar but even more Emily Dickinson with those riddled quatrains where each word is so uncanny but so perfectly put together in this little jewel box that can explode in your hand. It's a very rare thing even in poetry because not much mainstream poetry is rhymed and observes so specific a rhythm as his.

The current Bob Dylan is revealing himself to be what he was when he was 20, a troubadour and a collector and interpreter of old folk songs. He'll reinterpret himself differently every time where Cohen will make sure to get it exactly right.

Yes, and invested with the changes himself. When he sings Suzanne it's note for note the same as in 1967 but what you're hearing is a 75-year-old man singing a 40-year-old song of love so it instantly has a different coloration. But you're right, he's not playing games with it, he's counting on the years to speak through it. I think Dylan is the great minstrel of people when they're young and walking down the road and they don't know what's beyond the next mountain and the excitement of exploration and leaving everything behind and Cohen is about what's on the other side of the mountain.

He's the only person I know in the contemporary music world who's speaking for the wisdom of the 75-year-old rather the questing nature of the 20-year-old.

I was listening to some early Dylan recently from the Scorsese documentary No Direction Home and there's some early songs when Dylan was 19 and I suddenly got it and I realized when he was 19 he sounds like he's 1,000 years old and he sounds like a prophet who's come down from the mountain or forest and it's really uncanny to me now.

In some ways he's gotten younger and younger as the years have gone on whereas I think Cohen is more about how we've watched him deepen and mature and go from this person singing about division and confusion to this sage who's beyond it all. There are so many urban myths surrounding the distinctive saxophone solo by Raphael Ravenscroft on Gerry Rafferty's global hit Baker Street we should get them out of the way . . . before picking up... > Read more