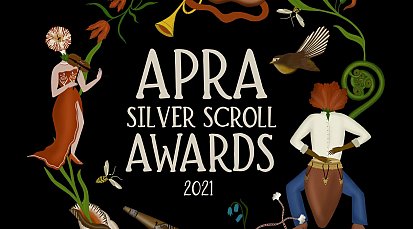 The annual Silver Scroll Award – which was founded in 1965 – acknowledges the depth of original songwriting in Aotearoa New Zealand, but there can only be one winner.

The award goes to the song which the members of APRA considers the best song of the year, regardless of how much or little it sold or was played on media outlets.

The award is for quality not quantity.

The funk-laden  'All Your Ships Have Sailed' comes from Troy Kingi's deeply personal and nostalgia-filled record  The Ghost of Freddie Cesar, the fourth album from his 10 10 10 series (10 albums in 10 years in 10 genres). Pulling from retro 70's-funk, Troy brings to life a character inspired by his missing father and a mysterious cassette tape. Being such a prolific artist, Troy is also a co-writer and vocalist on a second finalist song, ‘Turangawaewae’.

Maisey Rika brings waiata reo Māori to the spotlight this year with three finalist nominations, co-writing both 'Hiwa-i-te-rangi' and ‘Turangawaewae’ for the Silver Scroll Award, and 'Waitī Waitā' for the Maioha Award. 'Hiwa-i-te-rangi', co-written with Chris Chetland and hip-hop artist Rei, celebrates the youngest star in the cluster of Matariki. With the guidance of a Māori astronomer, Maisey Rika (a recent Arts Laureate Award recipient) created the album Ngā Mata o te Ariki Tāwhirimātea turning ancient stories of Matariki into beautiful waiata.

Tāmaki Makaurau indie-rockers, The Beths return to the Top 5 this year with a love song that lays it all on the line, ‘Jump Rope Gazers’ – the title track from their second LP of the same name. Blending the heartfelt and incisive vocals from frontwoman Elizabeth Stokes, with swaying, chiming guitar lines, and warm three-part harmonies from Jonathan, Ben, and Tristan, this is a soaring centrepiece of the record, which maintains their hook-laden, self-deprecating vibe, but turns up the pop power.

Co-written with Jonathan Pearce of The Beths, 'Leave Love Out Of This' is an expansive piano-driven political ballad, which brings Anthonie Tonnon back to the Top 5 this year. Widely known for his electric and immersive shows, technology has always been a close counterpart in Tonnon's music. On this title track from his recently released album, he weaves together the tasteful minimalism of paired back piano and vocals with an immersive synth-palette, eventually building to a swirling climax.

Representing the East Coast is Flaxmere-born rapper Tipene Harmer with his waiata reo rua 'Turangawaewae', co-written with Maisey Rika, Troy Kingi, and Tenei Kesha. It's nostalgic, proud, and deeply connected to identity. Tipene celebrates his culture and tipuna, welcoming us to celebrate Te Ao Māori. Featuring vocals from Maisey and Troy, 'Turangawaewae' epitomises bilingual excellence with the message to stay true to yourself.