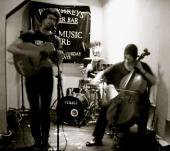 Not many musicians would write a song about the misuse of the apostrophe in punctuation, but Matt Stalker isn't just any musician. He works as psychotherapist in London and for six years worked in maximum security prisons as a forensic psychologist. So of course Jenny Nendick, the cellist in his band the Fables, would be a research psychologist working on a study looking at bipolar disorder.

Yep, Matt Stalker and the Fables, who play a kind of "chamber folk" (with a drummer who likes Rocky movies) are just a little bit different.

They completed their debut album The Man Who Said This Died of Alchemy on Christmas Eve last year and shortly after Matt and Jenny flew to New Zealand for a two month trip which would include some gigs.

The album was pressed in Auckland but an over-promising but un-delivering promoter has meant their short tour was hastily re-organised.  (See dates below)

Matt: Probably the theme music for Coronation Street or The Bill; either meant it was bed time, which I was never very happy about.

Jenny: Mr Blue Sky by ELO; my Nan made me a mix tape with it on and for some reason it just made me stupidly happy whenever I listened to it. It still does actually. I usually end up singing along loudly and dancing round in circles.

Matt: Jay Kay from British acid jazz band, Jamiroquai. As a teenager I used to try to dance like him. In retrospect I realise the man's a total idiot. Guitar-wise it was Eric Clapton, Francis Dunnery from It Bites, and Steve Vai.

Jenny: My musical aspirations were mostly classical when I was younger, so Jacqueline Du Pre was the big one for me. But I also longed to be one of the "cool" string players on Top of the Pops.

Matt and Jenny: Lennon, Nirvana, Madonna (not after her Music album though), Jacko

Matt: Who'd do such a cruel thing? Once I got over the trauma of the denial, I'd return to what I already do: psychotherapist. Oh, or graphic designer.

Jenny: Clinical psychologist or a circus performer (I went to a summer circus school when I was about 10 and learnt to juggle, spin plates etc and decided I wanted to run away and join the circus).

Matt: Winning a Battle, Losing The War by Kings of Convenience because it is just one of the most beautiful things in the world. And Hayloft by Canadian mentalists Mother Mother because it is pathologically catchy indiepop genius. 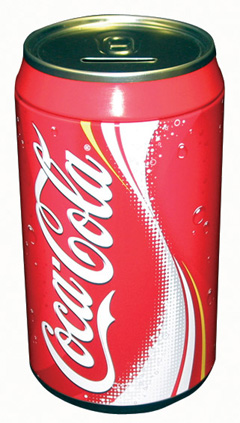 Jenny: An unopened Coke can stolen from the Travis tour bus in 1998. I've been led to believe it could explode at any point. I like the banal danger of it.

Matt: I hate reading about music. At least, I find references to music in literature are usually cringeworthy, like hearing your dad pretend to be "down with the kids" using phrases like "trendy". The only exception has been High Fidelity by Nick Hornby, and that's probably because the story was really about a slightly pathetic music obsessive; I could relate to that.

Matt: Jeff Buckley. I wouldn't play. I'd alternate between crying and taking notes.

Jenny: The original Pink Floyd line-up. I'd do half the set doing the early stuff with Syd Barrett too, and just make all sorts of crazy psychedlic sounds on the cello, then the other half would be the later stuff playing beautiful melodies.

Matt: I Love You, Man because Paul Rudd's character's awkwardness around men's men is scarily like me. And maybe Amelie for it's quirky romanticism and attention to the minutiae of life others overlook. I like to see that stuff and write about it.

Jenny: An Education; it is practically a biopic of my life (it's about a cellist called Jenny). I don't know how they found out about me but it's pretty accurate!

Matt: Jan Hellriegel gave me her entire back catalogue as a (very generous) gift after I met her in January, drank sake, and chatted about her tour with Jeff Buckley in the mid-90s. I also finally got round to getting High Violet by The National, which is phenomenal. Last thing I downloaded was an album by Canada's Margot; The Nuclear So and So's; it's amazing.

Jenny: CD: Holy Fuck -- who blew us away at Laneway last week and Huey Lewis and the News' Four on vinyl from a flea market in Mangawhai. I hate downloading -- I like the physical product; but I did get Aint No Grave by (Bluegrass pioneers) Crooked Still so I could listen to it immediately after a friend recommended it.

Matt: We heard Bohemian Rhapsody on the radio driving to Wellington this week. That's pretty epic isn't it? Maybe that. It probably is embarrassing, but it is also unique and, frankly, completely genius.

Matt: I get bored easily with pictures. Maybe something by Edward Hopper. Or just a picture of Zooey Deschanel. Mmmm, Zooey.

Jenny: Pink Floyd's Wish You Were Here; where the guys are shaking hands and one is on fire. Analyse that.

We're both far too chicken to get tattoos

Matt: We agree on this one: we'd pull together all of our musician friends and our other friends to travel round the world playing music and eating amazing food, starting in Canada and moving on from there. Obviously NZ would be a must.

And finally, in the nature of press conferences in Japan, &ldquo;Can you tell me please why this is your best album ever?

Matt: What makes you think it&rsquo;s not?

Jenny: Also, it's the only one we have and it took us ten years to make it. 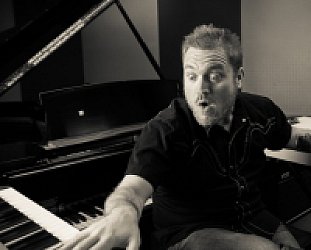 Band of Horses are an American group which a select but growing audience in New Zealand has embraced, largely on the strength of them touring here early (earlyish) in their career . . . and then... > Read more