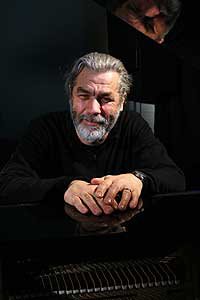 Norman Meehan is more than a jazz composer and gifted pianist, he also teaches jazz composition and history at the New Zeaand School of Music in Wellington. And he wrote the very fine biography of Mike Nock, Serious Fun (reviewed here) and Ten Conversations with Paul Bley.

On his own albums he has set the poetry of Americn e.e. cummings and New Zealand's Bill Manhire to music, and – as you may see from hs answers below – he also has a fine sense of humour.

I loved ‘I’ve Been Bitten by the Lovebug’ which I think was playing on the radio when I was about 7. I had a fantasy of playing this tune on lead guitar while the attractive girls in my standard 2 class at school in Hastings danced to my playing. It hasn’t happened yet.

I had the flu one night and had the radio playing while I took a bath. I was pretty woozy and the student radio station was playing a lot of fusion. The memorable tracks were Billy Cobham’s ‘The Red Baron’, and Jeremy Steig – something from the Wayfarin’ Stranger album I think. The combination of heat, flu and codral was intoxicating. I’ve not been the same since.

Sonny Stitt with the Oscar Peterson Trio playing up-tempo bebop. Maybe their version of A Privave or Scrapple from the Apple.

Miles – around 1969 I guess – some of that Silent Way / early Bitches Brew music live would be killing. Or maybe Edward Vesala’s Sound and Fury group.

In A Silent Way – hands down the best period for me. Pretty well everything from 68-70 is the shit

No. We have a pink ukelele – does that count?

What is the ‘jazz life’? If that’s about drugs, then Hampton Hawes or Art Pepper’s biographies are compellingly ghastly. If it is about music (and the music business) I really enjoyed Bill Bruford’s autobiography. I don’t know – they are all so different. Ian Carr’s book ‘Music Outside’ is pretty wonderful, and ‘But Beautiful’ by Geoff Dwyer is unique and memorable.

Any three episodes of Get Smart.

I wouldn’t mind the royalties from The Theme From M*A*S*H. Is that a jazz standard?

I’ve got a big picture of Ornette Coleman on the wall – from the cover of The Shape of Jazz To Come. I think we all need Ornette watching over us.

Messiaen’s Quartet for the end of time (a good version…)

Mingus with Dannie Richmond in back

I have no idea what they’d play – given the personalities it’d have to be something by Mingus. But imagine that group playing some of Grolnick’s music; that’d be beautiful.

‘Scott Dying’ from These Rough Notes (VUP, book and CD) [It’s not jazz – does that still count?]

I think it captures musical melancholy – that’s what I am trying to do with music, I think – as Henry Mancini has it: ‘the musical sadness that makes life worth living.’