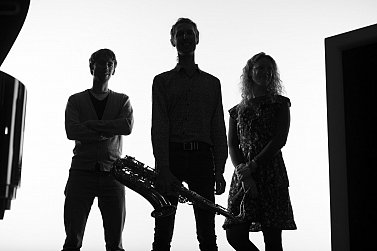 The Australian trio Berardi/Foran/Karlen – soon to undertake a short New Zealand tour (see dates below) – formed in 2014 in Brisbane.

Their debut album Hope in My Pocket released in 2015 won the Queensland Music Award for Jazz in 2016 and the APRA/Australian Music Centre Queensland State Award for Excellence in Jazz at the Art Music Awards.

And it is an album with some real emotional and relevant depth to it as it explored the experiences and emotions in the correspondence of men and women involved the military past of Australia and New Zealand. The songs explore themes of hope, fear, separation, loss, love, and conditions of war.

Separately the members of the trio have toured to the Montreux, Bremen, Tokyo, Manchester, Melbourne and Sydney jazz festivals, and performed at venues around the world from Norway to China, Argentina to Sweden.

“We’ve known each other for such a long time, so forming the group was quite natural after we performed a show in Brisbane…from this the style and material for the trio came together quite clearly as this trio is something quite distinct and different to our other projects”, says Karlen.

With their short tour pending it was timely to flick them our Famous Elsewhere Jazz Questionnaire and Berardi (KB) and Karlen (RK) played tag-team on the answers . . .

RK: I grew in a family of musicians but the first album that I was really hooked on was John Coltrane’s Crescent. There is a power and a lyricism to that album which I really appealed to me.

KB: I first realised jazz was a thing for me when I heard Vince Jones and his band ....I hadn't really "got it" until that point.

I think what was appealing, other than the wonderful musicianship and his tone(!!) was that you could hear his soul music influences coming through while singing jazz repertoire.

RK: Tricky question. I would pick the (filmed) live version of Fine and Mellow by Billie Holiday featuring Count Basie, Lester Young, Gerry Mulligan and make of the key jazz players of that time. It’s an incredible clip!

KB: I would have loved to see Bill Evans and his trio with Scott LaFaro. Those two together is still some of my favourite music made.

RK: As a composer and arranger I really like the orchestral work with Gil Evans. The colours and space of this music is really stunning and special. The playing of the 60’s quintet with Wayne Shorter, Herbie, Ron Carter and Tony Williams is incredible- the spontaneity, interaction and intensity is next level.

KB: I have a Bill Evans signed coaster in a frame, which was a gift from one of my mentors, John Hoffman. He saw him play as a child and then gave it to me on my graduation from uni.

RK: I’m not sure about the Jazz life literature but Effortless Mastery by Kenny Werner was a very important book for me as it was the first time that I had read about what happens internally when improvising and playing. RK: I think that being on stage with Keith Jarrett would be very special. He can make anything sound like he wrote it and is one of the few people who nails very many different styles. I don’t think it matters too much what we played but it would be very cool hearing him play a piece of mine!

KB: My most recent purchases musically are Ben Abraham's Sirens - not jazz- a wonderful song writer and beautiful singer.

And Holorphonic's album Light Magnet, which is my friend Miro Sprauge and his crew from the Theolonious Monk Institute's album.  It was produced by Wayne Shorter and is full of exciting new young musos in the scene, most based in LA, awesome playing and compositions. Just so inspiring!

KB: The standard I wish is had written is ... well, there are two, Adam's Apple and Body and Soul.

RK: It’s not an American standard the but Kenny Wheeler’s Kind Folk is a very special tune. Otherwise Goodbye Porkpie Hat by Charles Mingus is an amazing piece.

RK: It would be nice to have Turners’ unfinished paintings hanging on my wall. The finished ones are nice too but the unfinished ones have a really beautiful abstract openness to them. RK: I think that Herbie Hancock, Ron Carter and Tony Williams would be a lovely and sympathetic rhythm section to play with.

KB: From our newest album, it would be "No Shepherds Live Here".  I wrote it for a dear friend. I think it's good to remember that everyone has a story, we all need some empathy and some love.  You never know what someone may be going through in their life at that moment in time.