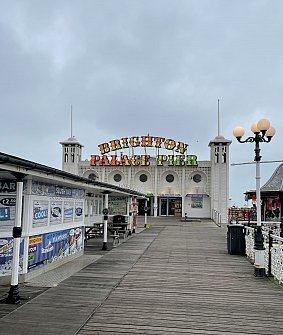 Travel in Europe during Covid can offer inconveniences, but fewer than masked-up/scan-in New Zealanders might think.

That’s because – and this bears repeating for those at home who are frustrated – the countries we’ve been in, Sweden and England, have passed peak Covid and the rates of infection, hospitalisation and death are declining rapidly.

In England vaccination rates are lower than in New Zealand – around 85 percent with two jabs, 66 percent with the booster-- but seven-day average cases have fallen from 140,00 in late December to 60,000 and are still dropping.

When we decided to come here because family couldn’t come to us (some partnersstill can’t) we – in the argot of the age – exercised an abundance of caution and did our research.

We made educated guesses about the demographics of infection rates and the likelihood of being able to return in late April.

At that time there were many tests to be undertaken for entry into Sweden, Britain and Singapore which we accepted, knowing things would change. We hadn’t counted on how rapidly.

On departure day we had expensive ($375 each), fast turnaround tests, getting our negative results a few hours before take-off -- which we only needed to show whendeparting Auckland (our country not wishing to export Covid carriers to the Covid-ravaged Northern Hemisphere?) and on arrival in Singapore where we were in transit.

When transiting through Copenhagen to Stockholm we flashed our passports and boarding passes, and walked unhindered though Stockholm’s Arlanda airport and caught the train to T-Centralen station.

We’d been masked for about 30 hours by the time one of my sons met us and were in a city where we stood out for wearing them. No QR codes either. Life as usual.

Sweden has opened up, as has Britain.

Flying to London-Gatwick meant filling out a Passenger Locator Form on-line (nomore time-consuming than the old arrival/departure cards) and that too was on our phone. At Arlanda we had to show that, our international vax card, passports and tickets. That was it.

Another masked flight – although that rule didn’t appear to apply to the guy next to Megan who coughed and wheezed for the two hours -- and straight through UK Customs, although un-vaxxed travellers are required to do a test on day one or two after arrival.

I wonder how that’s working out.

So here we are in famously funky Brighton where the narrow lanes are packed with locals and daytrippers from London, hen and stag parties.

There are no QR codes, only a few shops require masks be worn and at a guess only about 10 percent of people on buses wear masks. My son who goes to London frequently says it’s about 70:30 on the train.

It’s still chilly but spring buds are appearing in the gardens around the eccentric Royal Pavilion.

In the local Basketmaker’s Arms drinkers and diners crammed into the tiny pub onFriday night. Tonight after a late lunch we’re going to the new Batman movie.

For PM Boris Johnson, the Covid crisis has been a convenient cover for the inevitable consequences of Brexit. Grindingly depressing reports from Ukraine have given another diversion from some manifest government failings whilequestions about his party’s links to donations by Russian oligarchs have been relegated.

And the war drags on.