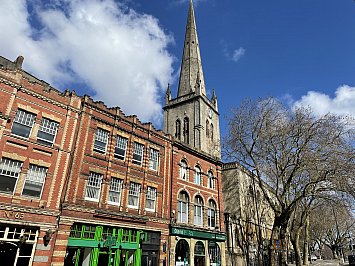 By definition, you can’t prepare for the unexpected.
So
traveling through the
maskless
Covid lands means a certain inevitability about being infected at some point.
We
each do an
RAT
once a week;
so far, so good.

A positive test would not be unexpected and we’d just have to hole up somewhere for a while.

But we’d rather be doing that here having seen family, than at home and the same four walls.

What was unexpected however was the swift and merciless invasion of Ukraine, which caught even seasoned political observers by surprise.

The Ukraine flag flies here in Brighton, a gesture of solidarity with that brutalised nation but there’s also a feeling of helplessness abroad. Newspapers essay the conflict at length in a way our papers rarely do, with expert military and geo-political opinion juggling the nuances and options.

Yet aside from sending aid and sympathy, many feel a kind of impotence about this slow-moving invasion where pregnant women and children are now considered fair game.

And while Britain as a nation stands with Ukraine, fewer than 1000 visas have been issued to allow those on temporary visas to bring relatives here. The EU is squaring off and demanding Britain do more.

Every day we hear of further British sanctions applied, another oligarch being made uncomfortable, tragic stories which put a human face to the appalling atrocities, that the Russian economy is on the precipice and yet . . .

The sanctions imposed are being felt here where the average price of a litre of petrol is around NZ$3. It’s a record high and rising steadily. By the time you read this, who knows what it will be.

People are taking to social media to post pictures of prices at their local service station.

We couldn’t have prepared for that and our plan was always to hire a car for about four weeks and make our leisurely way up to the Highlands before heading back to Edinburgh.

The trip is probably going to cost about twice what we thought in late 2021 when we were contacting family and drafting an itinerary.

Some will doubtless say this is just punishment for our hubris in traveling at this time, but we made the decision and will live by it.

Because we prefer the side roads through villages and towns we’ll see more but the meandering will come at a cost. However we didn’t come here to save money, and only an accountant remembers the price of things six months later. The experiences you never forget.

That said, with the price of diesel so high (about NZ$3.30) the cost of everything from herbal tea to heavy machinery is going to climb as transport and distribution costs go up incrementally, and probably logarithmically given how inter-dependent an economy is.

This is happening in a climate where nervous Tory MPs are turning on their own because of the spiralling cost of living which was emerging even before the current sanctions.

With some economists predicting inflation hitting 7.25 percent next month, rising to 10 percent later in the year, a people’s empathy for those in distress can cool when faced with privations of their own.

These are questions and priorities that many, however sympathetic to the Ukraine cause, will face in coming weeks: rising food and heating costs, more migrants requiring social services, the press of desperate humanity moving across Europe, the dispossessed gathering at Calais, pressure from the EU . . .

There are more questions than answers, more doubts than certainties.

Oh, and my Covid test just came back. I'm positive.

Hi Mr. Reid,
This is a good reminder for all the NZers who don't seem to realise that the problems of inflation are international, as are the wince-inducing costs of petrol. They can't blame everything on the current government, and the weeping's yet to come... I hope you recover quickly & I'm looking forward to hearing about your travels in Scotland. I have a hankering to go there. :)