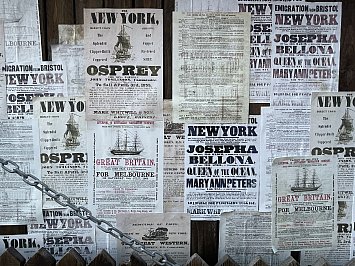 Because I’m not a scientist, I can’t confirm that irritability is a side effect of Covid. But that – and a blinding headache every time I coughed – was certainly evident.

Perhaps that’s just a local variant brought on by trying to negotiate Bristol’s one-way streets, roadworks, dead ends and traffic changes. It’s a remarkable city but the devil of a place to drive in – as even Uber drivers attest – let alone find a place to pull over and swear at Google maps.

Most of the time we walked, of course, but having a hotel in the centre and family in the suburbs meant almost daily encounters with on-coming vehicles in narrow streets.

Covid can also make you do strange things: one afternoon so worn down by headaches and weariness we went to a huge cinema at an entertainment complex in Bristol’s northernsuburbs.

There was just us and a dozen socially-distancing seniors in a movie theatre designed to accommodate about 200.

We watched The Phantom of the Open, one of those comfortable lightweight and eccentric British comedies which appeals to the very older demographic. And us too, as a brief but welcome respite.

The following day however we both tested negative and the world under clear blue British skies took on a warm glow once more. We ambled around the local shops with my wife’s niece and her little girl and life once again seemed normal.

But then I picked up the newspapers: Ukraine’s sheer awfulness which goes beyond human comprehension, and similarly the obscene wealth of 35 Russian oligarchs now under investigation (what does NZ$33 billion actually look like?).

There were reports of fake news, trolls and the proliferation of political disinformation from all corners, paperwork holding up the flight of refugees to Scotland, the highest level of taxation since the 40s apparently and the on-going police investigation into Boris Johnson’s lockdown Christmas gatherings at No 10 (now two months and counting).

It puts a headache into context.

But the pandemic rolls on with estimates one in 20 in Britain – one in 13 in Scotland where we’re heading – had Covid in the past week. Which means many on the streets must be infectious.

The Health Secretary Sajid Javid said people with symptoms should “socialise a bit less [and] stay indoors” until they felt better. Oh, okay.

Covid is now, he admitted, in the same category as other infectious diseases.

The “learn to live with Covid” trope is trotted out by those who think there will be business as usual.

But with long Covid, business closures, climbing rates of depression (notably among the young), schools and health services struggling to cope, rising inflation and so much more collateral damage, there won’t be “usual” for a long time to come.

Britain is introducing a fourth jab for those over 75 (infectionat record levels in that demographic) or with specific vulnerabilities. Free Covid testing is coming to an end on April 1. Those who can’t afford to get tested simply won’t.

In a world gone awry, juxtapositions abound: Hugh Grant tipped as the next Doctor Who; handsome William and elegant Kate in the Caribbean representing the Queen on her Platinum Jubilee and sparking comment about colonialism and The Guardian picked the top 10 Iron Maiden songs.

When you read stuff like that, life does seem strangely normal.

And, while conceding no scientific evidence in support, a decent Malbec over dinner might just be a cure for Covid.

It certainly had me returning a negative test the next morning. And the world, for all its on-going woes and worries, didsomehow feel brighter.

Great reading Graham, a pity you got the dreaded bot and yet you manage to entertain us all with your informative and educational writing . Thanks, keep warm and healthy!