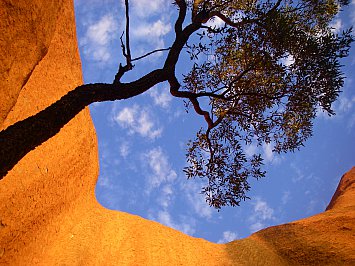 >Uluru at the close of another cloudless day in the desert. In the designated “sunset viewing spot” a few kilometres from the big red rock, campervans and cars are arriving. In this tiny part of the seemingly endless landscape, largely silent except for the whistle of wind through scrubby Spinifex and myrtle trees, the air is alive with the sound of beer cans being cracked open, happy chatter around portable barbecues and the relentless click and whirr of cameras.

In the distance Uluru -- dominating the flat landscape -- is as alluringly silent as the moon.

“Standing out there in the stark desert, its weather-scarred walls rising sheer and bare to the height of 1100 feet, it seems to dwarf the mind by its presence,” wrote the explorer Alan Breaden over a century ago. “Yet drop your eyes from it you cannot . . . you feel as a little thing of no account . . . . it looks like some deliberate trick of nature, dropped there to guard and sentinel for ever the great western deserts beyond.”

To the Yankunytjatjara and Pitjantjatjara people, Uluru is far from silent: it is a storyboard of legends and imbued with spiritual meaning.

And so as the noise of visitors setting up their tripods and telephoto lenses increases I leave this busy place and head towards mysterious and massive Uluru some 10 minutes drive away.

When I get to the parking area the place is deserted. To my astonishment I have Uluru to myself except for another guy who whispers “awe-inspiring, isn’t it?” before he walks away.

And then there I am, alone at the base of Uluru, its precipitous walls rising almost vertically out of the dirt and glowing bright red in the on-coming sunset.

From a short distance its smooth sides look almost powdery and smooth but up close you can see how the surface is flaking away through wind erosion and chemical decay. And although from the sunset viewing spot it appears to be a sculptured monolith, proximity allows you to see the ribbing in the rock, “the waveform cave” Malaku Wilytja, the slabs which are breaking away along enormous seams, and the petroglyphs (drawings) left by unknown hands many hundreds and possibly thousands of years ago.

If nothing else, Uluru impresses upon you a sense of time and permanence: as we see it now Uluru may have emerged from the 550 million year old sedimentary rock about 65 million years ago, a timeframe we cannot begin to comprehend but must simply be in awe of.

In that context the Aboriginal people who have been here for at least 25,000 years are relatively recent arrivals, and it makes mockery of its “discovery” by William Christie Gosse in 1873 who named it Ayers Rock in honour of Sir Henry Ayers, the governor of South Australia.

Today Uluru -- which attracts around 450,000 visitors annually -- is another sight for many tourists to tick off, and the nearby town of Yulara on the edge of the Uluru-Kata Tjuta National Park is a motel/hotel and camping complex with boisterous outdoor bars at night, restaurants and camping supply shops, shops catering for tourists, and most important of all, a petrol station.

Yulara is around 450 km from Alice Springs and increasingly tourists dropping in are using nearby Connellan Airport rather than make the desert drive.

But having a car allows you access to the rock at that magical sunset time when others seem to be sitting at distance, and also the freedom to get across to nearby Kata Tjuta, yet another impressive formation of 36 separate domes which dominates the landscape some 40km to the west of Uluru.

The explorer Arthur Groom wrote in 1948 “the smallest dome could have crowned the world’s greatest cathedral and the greatest was a red immensity of rock that would have completely dwarfed the same edifice”.

Such religious references are almost inevitable when confronted by the majestic Uluru and Kata Tjuta, something not lost on many who visit and respect the Aborigines’ request that they not be climbed. Of course with guide ropes and tracks, that doesn’t stop some -- but I didn’t. In fact when I got home someone asked me if I had touched Uluru and I realised I hadn’t. It didn’t seem necessary.

There in the late afternoon, by myself with the rock glowing beneath a flat blue sky, it never occurred to me to feel the stone itself. It was enough to be in its mysterious presence.

As the light changed the colour softened, the outlines of trees against it became sharper and then appeared as silhouettes against a wall of bright red.

There are dozens of Aboriginal stories about Uluru: the Mala and their conflict with another group who sent evil creatures against them; the Two Boys who dragged their fingers through mud which hardened and formed the huge ribbings on the southern side; the stories of the python woman and the lizard man, of battles fought, ceremonies conducted . . .

As the desert started to chill I sat alone at the base off this extraordinary geological feature -- far from the only one in this vast landscape -- and simply watched the colour of the sky, the rock and the few clouds overhead change.

This is where many dreaming tracks cross, it is between vast deserts -- the Simpson, Great Victoria, Gibson and Tanami -- and Uluru is magnetic in its pull.

I took some photographs knowing that none could do it justice, but mostly just sat silently.

Then I drove back towards Yulara, the sun now well below the horizon. The road was empty -- until I got back to the designated viewing spot.

From there on I was in a steady stream of tail-lights, people going back to their various hotel rooms in Yulara. I guess each of them had remarkably similar photos of that beguiling big red rock in the middle of the sun-burned desert.