Roger pulls his four-wheel drive around another bend through the bush and there before us, in the middle of the rough road, is a fawn. Roger brakes gently and we come to a dusty halt. The fawn starts abruptly, looks directly at us for a full half minute, then bounds off into the dense bush.

It won’t be the last deer we will see today. In fact on this warm afternoon until a mellow dusk we will sight a dozen more -- fallow and red deer -- among them two large females and a handsome young stag with a magnificent spread of antlers.

This is Waipari, 10,000 acres of thick bush located between fertile farmland on the south shore of picturesque Lake Taupo and famous Tongariro National Park.

The Waipari property -- which Roger Lorigan has on a six year lease from Ngati Tuwharetoa, the local Maori tribe -- is dramatic. Once this land was logged, but it has now regrown to be covered in the native bush which clings to the sides of the precipitous cliffs and walls of deeply riven valleys.

It is land scoured by creeks and streams, of high plateaux with vast views across to the mountains Tongariro and Ruapehu. And it feels utterly remote. It is largely unexplored and yet, by good fortune, its recent history has made it surprisingly accessible 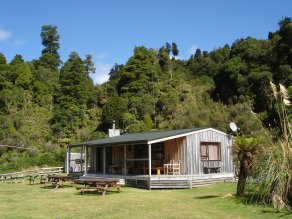 “It’s a rare place,” says Lorigan as we sit at the comfortable yet rustic Waipari lodge set up for hunters and those who want an escape from the world. “There are about 120 kilometres of tracks through it left over from the logging days. I keep finding some I’ve never been down.”

Many of these tracks however are little more than crude outlines along which sturdy quad bikes can make their way. But they allow visitors to enter remote corners, the areas which deer inhabit.

Lorigan is uncertain just how many deer there are out here: the property -- which also borders a farm of equal size -- has within it 700 acres set aside for trophy hunters, “game ranch hunting as it is called”. Within that rugged area are between 40 and 100 deer, so a kill is all but guaranteed within a day or two.

“But my guess is there are many more. I just know what I see wandering around and I’m seeing deer all the time, and ones I’ve never seen before.”

Waipari is a hunter’s paradise, particularly for those who like the whole experience of hunting. The lodge and cabins -- which accommodate 16 in total -- emphasise comfort over luxury: there are hot showers, a modern kitchen, wood burner fire, a well-used barbecue, good beds and all the quiet tranquillity that the location affords.

“Being here is the experience,” says Lorigan as we look across a deep ravine at the bush on the other side of the spectacular gorge.

Around 85 percent of those who come to shoot are New Zealanders although Americans and Europeans enjoy the slightly rough edge, the real atmosphere of being in the New Zealand bush.

Trout fishing is just a two minute helicopter ride away down in the headwaters of the Whanganui River -- many guests chopper to the lodge’s front lawn from Taupo 30 minutes away across the lake -- and there is a rifle range, skeet shooting, and beautiful bush walks.

Far from being impenetrable, there are areas where the bush has been cleared and grass sown. It makes for a landscape which seems to breathe easily, and these spots also attract the deer which many guests simply come to observe and photograph.

Lorigan locks his 223 rifle on the front of the quad bike and we climb on for a look around the property. We’re not shooting today, just scouting for deer -- although he drops a goat with a single shot from 100 metres.

“Too many goats,” he says. “They compete with deer for food and upset the balance of the land.”

Lorigan was once a contract shooter -- he admits to having shot thousands of deer, many from helicopters -- but these days views things differently. Having recently taken over Waipari -- and after the lease ends he expects to be in partnership with the Tuwharetoa people with whom he has worked for 30 years -- he wants to see the property developed for international guests and an ecological balance established.

It is with pride he notes the kereru (wood pigeons) which soar above the trees, that you can hear kiwi at night, and that we’ll be woken by a dawn chorus of native birds which will include numerous melodious tui and bellbirds. 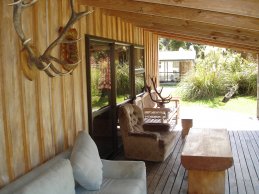 At dusk we sit on comfortable couches outside the lodge and look at the increasingly blackness of the sky then the scattering of bright stars above.

We eat fresh venison steaks and make ourselves mashed potatoes.

“I’ve notice people who come here want to make their own meals,” he says. “Just part of the whole experience I think. Of course we do prepare meals for people, and can do special diets as well, but really people who come like to participate in the whole atmosphere of the place.”

He sees Waipari as a place where men can come, with their sons perhaps, and enjoy the outdoor experience while the wives stay in Taupo or at nearby hotels. But the door is open to all. If you want to just read a book and enjoy the solitude you’re equally welcome. Those shooting go with a guide, the limit on numbers and the vastness of the property means no shooters accidentally stray into someone else’s area. Some come for a day, others for a week.

So we sit outside and talk, as men do, of our lives and wives and adventures. Lorigan has travelled widely and beguiles me with stories of Namibia and the vast hordes of plains animals there.

We go to our comfortable beds and sleep deeply until birds wake us just after first light. Sunlight spreads across the valley, pulling wispy mist from the hills.

I ask Lorigan to draw me a crude map showing just how much, or little, of this vast property we had seen in five hours the previous afternoon when we had gone from valley floor to Baker‘s Ridge and taken in a spectacular panorama. He indicates an area maybe one sixth of the total acreage.

The following afternoon back in Taupo I wait at traffic lights while trucks and campervans thunder by. I laugh to myself, thinking of an incident at dusk yesterday in a valley only an hour away but a world removed from where I am now standing.

Roger and I had crossed a ridge on foot to spot deer in the valley below. As we step lightly down a track I think I hear the footfall of an animal off to my left. I pause and listen. All around is a bush-covered silence, punctuated only by bird-call.

“Did you hear something?” Roger whispers.