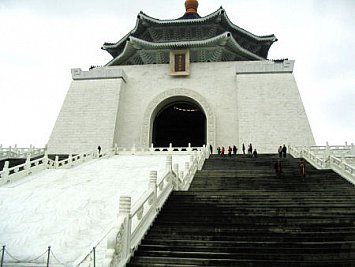 Taipei - population about 2.5 million - must be the easiest city in the world to leave. A million motor scooters, yellow dust from China, sometimes unbearable heat ... for the tourist it's always time to head home or to the quieter, cleaner but usually more dull cities on the east coast.

But some people have business in Taipei, then time to kill before the flight out.

Here, then, is a suggestion of an interesting afternoon-into-evening in a city which, among many other things, houses the world's finest collection of Chinese art.

The artworks in the National Palace Museum must be the most peripatetic on the planet.

The acquisition of Chinese art began on the mainland 1000 years ago and the tradition of collecting the best and most beautiful continued under subsequent dynasties. Originally the works were constantly in transit between Beijing and Nanjing, then, from the 1400s, they were housed in the Forbidden City in Beijing but for the eyes of the emperor and guests only.

The collection was opened to the public with the overthrow of the emperor by the Kuomintang in 1925, but when the Japanese invaded Manchuria in 1931 the Kuomintang began moving it for safekeeping. With the outbreak of the Second World War some items were moved southwest to Changsha, then Guiyang and on to Chengdu. Some then went to the small village of Emei, but in 1947 the whole lot was collected again in Nanjing.

With the rise of the communists the Kuomintang shipped most of the works to Taiwan for storage until their return to the mainland.

So far that hasn't happened, so this extraordinary collection of sculpture, painting, jade, scrolls and so on - so vast it is changed every three months or so and it takes more than a decade of visits to see all 740,000 items - is now housed in magnificent premises just north of Taipei in a small parkland setting.

It displays such astonishing works as the jade funerary mask from around 8 BC, a tiny fishing boat carved from a peach stone (with people inside) from the first half of the 18th century, and a breathtakingly beautiful, four-tiered food container carved out of ivory with the appearance of delicate lace.

To get to the museum take the subway to Shihlin Station, walk out the main exit and catch the 304 bus to the terminus, which is only 100m from the museum. Hour-long conducted tours in English take place at 10 am and 3 pm daily. They are worth it and allow you to orient yourself. Then stay on for a leisurely look. Allow at least two hours, if you don't have years to spend.

A few minutes up the road to your left and on the opposite side is the small, new and fascinating Shung Ye Museum of Formosa Aborigines, worth an hour or so of your time.

The nine aboriginal groups on Taiwan - who make up less than 2 per cent of the population - have unique and distinctive cultures. This museum displays pottery and textile artefacts, reconstructions of houses, musical instruments and so on. The English-language video is helpful.

Take the return bus-subway back from Shihlin direct to Chiang Kaishek Memorial Station and get your camera out. Inside the memorial hall you can photograph CKS' classic 50s cars and a realistic wax model of the Kuomintang founder himself. Be sure to catch the changing of the guard on the hour beneath the huge statue of CKS which overlooks the courtyard below. You won't see a more choreographed or balletic military display anywhere.

Go back to the subway and go to Lungshan Temple Station (change at Taipei Train Station) to visit one of the city's most interesting temples.

The much reconstructed Lungshan - where people pray for good fortune, success in exams, children and so on - is again undergoing renovations but the roof decorations, statuary and artefacts are well worth a look. Stand at the back of the courtyard to get the feel of things and watch the rituals, before proceeding to the main altar and the three large altar areas around the back. Allow at least half an hour - it is fascinating.

On leaving Lungshan, cross the road to the market area of the famous Snake Alley, where many pay through the nose in restaurants to drink snake's blood, which is an aphrodisiac.

The food stalls one street up are cheaper, but they don't do snake or turtles.

There are market-type bargains here to be had, but you'll need to have your negotiating wits about you.

After that it's back to the hotel and you can lie back and think of home as 1000 motor scooters race beneath your window.