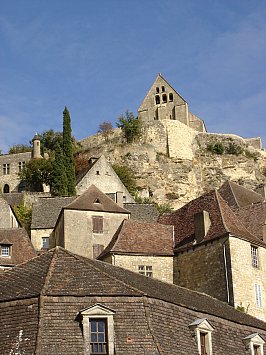 Half an hour out of Bordeaux I stop the car so we can gasp at the beauty of a crumbling chateau on a picture perfect hillside. Ten minutes later I do the same above a valley deliberately posing for a photograph. A few kilometres further it’s for an old stone house by the roadside.

The day is clear and radiant blue, the breeze warm, and the architecture and landscapes quaint or spectacular. We stop again. And again.

It is obvious this drive from Bordeaux through the Dordogne region and across to a friend’s house in Provence is going to take longer -- and be more photographed -- than I had imagined.

So much to see, so many wines to taste, baguettes and cheeses to eat, and fortunately so much time at our disposal.

A drive through the Dordogne region -- crisscrossing the river of the same name -- had long been a dream of mine: the names of towns such as Castillon, Pessac and Figeac evoking the romance of medieval France; and towards the end after we had seen enough of the old chateaux there would be three significant bridges -- the spectacular one at Millau which opened in 2005 and floats like gossamer across an immense valley, the famously incomplete old one in Avignon, and the massive Roman aqueduct Pont du Gard near our destination.

After successfully negotiating roundabouts in Bordeaux and taking a wrong through a brutally unattractive industrial suburb, we are finally on our journey through the Dordogne which the French more correctly call Perigord.

This is a region renown for many things, not the least its volatile history. Everywhere are bastides -- fortified towns -- built during the Middle Ages when this land was fought over by the French and the British. 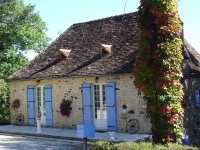 We are driving due east from Bordeaux as far as tiny Martel at the end of the Dordogne Valley then heading south east through Rodez and Millau to Nimes and Avignon.

The drive is effortless -- the French sensibly prefer roundabout to traffic lights -- and the roads good. We are in foie gras, wine and truffle country, and long brown leaves of tobacco hang in sheds drying in the soft breeze. The air is fragrant and dry.

Our first stop is tidy little Castillon where the final shots of the Hundred Years War were fired. The town sits above the green river, boasts a slightly run-down 18th century church and nearby is the birthplace of the great 16th century French essayist Montaigne.

Through river valleys and vineyards we head for Bergerac (with its statue of Cyrano and a tobacco museum), but on the way are diverted by a sign promising prehistoric cave drawings. We promptly get lost in back roads but, on turning a corner, are met by the breathtaking beauty of a cluster of houses near Bigaroque which hugs a small hill. The stone homes appear to grow out of the rocks. It is a living postcard yet they are silent and deserted.

We wind back through the lush landscape and across the Dordogne then follow it to the towns collectively known as Beynac-et-Cazenac which face each other across the vast valley.

Beynac -- which Richard the Lionheart once held -- has been visible from a distance, its towering castle atop a steep bluff. We climb the steep path between homes of Lilliputian dimensions, their window boxes ablaze with flowers and walls covered with vines. 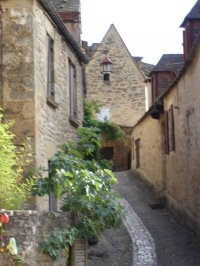 From the top the wide sweep of the valley glistens green and gold in the afternoon light.

The Dordogne is one of the most attractive regions in a country which has a surfeit of beauties, but aside from the landscape --- punctuated by chateaux, villages and farmhouses -- are also small, beautifully preserved towns such as Martel which seems to shimmer in the sun because it is largely built of white stone.

At the centre of this medieval town where window shutters are painted vivid blue or deep red is the open-air market hall. Down narrow lanes shopkeepers have hung out their signs with images representing their trade.

The town centre with its massive stone buildings, turrets and towers has a feel of permanence.

And everywhere in the Dordogne you are reminded of the breadth of history: in Figeac even the local Best Western Hotel on the banks of the River Cele is in a 14th century building.

But not everything on our journey is so ancient. After we have left the Dordogne and driven through Rodez our journey takes us to Millau, the glove capital of France and a crossroads town beneath high white cliffs once considered more of a traffic jam than a city.

That was until the British architects Foster and Partners designed the 2.5 kilometre bridge above the town and spanning the valley of the River Tarn. It is poetry spun from steel and the first great piece of 21st century architecture. We drive across it in silence, its massive cables draw us onward, the pillars between piercing the clouds.

Then on the other side we are taken back in time by a 15th century fort and a church once used by Knights Templar on their way to or from the Holy Land.

We pass through mountains where Protestants once hid from Catholics, then move on to Nimes. We spend a day in Avignon in the palace which popes called home six centuries ago, and walk to the famous Pont d’Avignon, the bridge which kept falling down as the Rhone river knocked out is supports.

Rebuilding was abandoned in the mid 17th century and now it stands, exotically incomplete and made famous in song.

We are almost at the small village of St Maximin, our destination. Within the next few days we will go to the nearby Pont du Gard, the enormous Roman aqueduct built 2000 years ago. It too is an extraordinary feat of engineering, and the perfect counterpoint to the bridge at Millau.

Our journey is ending. We have passed through a landscape where thousands of years of human history is still visible, have drunk fine wine and eaten local delicacies, been in small cafes and enormous castles, on high mountains and in low valleys beside ancient rivers, and only once been lost and off our map.

And that was the memorable day we drove into a beautiful, silent and nameless village near Bigaroque.