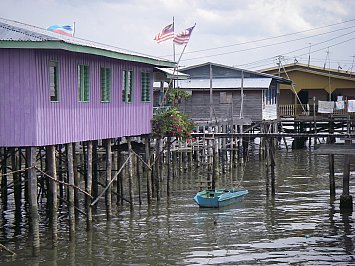 Curiously enough, the place I know best in Kota Kinabalu, the capital of Sabah on the northernmost tip of Malaysian Borneo, is the airport. In the course of a few days I was there five times; while going to and from Brunei, then the city of Sandakan where I went to see orang utan and took in a city tour, and finally when I flew back to KL, Kuala Lumpur.

But being familiar with the airport in Kota Kinabalu, or KK as it is commonly known, is not unusual: in a year four million people pass through, it is the second most busy aviation hub in Malaysia after KL.

KK has a population of around 700,000 in the greater area, and it is getting greater by the week. Numerous low-rise building projects of government-sponsored apartments are sprouting on the city’s periphery and seen from the air -- which I can confirm -- these projects spread from the city centre like ink on a blotter.

KK is one of the go-ahead cities in the Federation of Malaysia and Harry, who spends much of his life ferrying people like me to and from the airport, points out what will soon be the largest shopping mall in Malaysian Borneo. It is right beside the impressive campus of the University of Sabah (with its mosque dominating the skyline) and across the highway from yet another burgeoning development of apartments, shophouses, eateries and a sports centre. 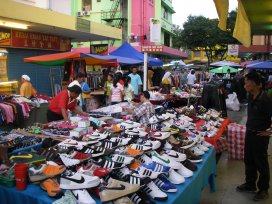 KK may be one of the fastest growing cities in Malaysia, but the old world is never far away. Just minutes from the city centre on the highway north are the scrabbles of water-village houses on stilts above inlets and rivers.      As are the older, cheaply constructed government-sponsored housing from two and three decades ago where washing hangs like semaphore flags and the fungus patchwork exteriors are notable for the battered air conditioners hanging from walls.

These areas are not represented in tourist brochures but are alive, fascinating and available. It is possible to amble through the water villages on shaky but solid planks. This is Old World Malaysia, unchanged by development -- although satellite dishes are not uncommon and girls in headscarfs chat on cellphones like teenagers everywhere.

KK even has Italian and Japanese restaurants.

If KK seems to be a city rushing into the future it is because its recent past was all but obliterated. Literally.

In the late 1880s, around the time James Brooke was becoming the White Rajah of Sarawak to the south, the British North Borneo Company began creating small settlements -- in what became Sabah -- to exploit the natural resources. The town of Jesselton, named for the vice-chairman of the company, was established in what is now KK.

But the Second World War changed everything: the British razed Jesselton in the face of the advancing Japanese, and what little was left was bombed back to ground-level by British aircraft when the Japanese retreated. Locals point out the few colonial-era buildings which were left, among them the old Post Office.

So KK had little choice but to begin again, and has done so with a fervour.

Today KK is an entry point to Malaysia from nearby China, Korea, Taiwan, Japan and the Philippines. And it seemed many of these tourists, and those from other parts of Malaysia -- some young and self-conscious Japanese honeymoon couples on package deals, Indian families up from KK for a long weekend, Malay businesspeople in for a conference, Australians and a few New Zealanders -- turned up at the luxury hotel I was in some 30 minutes north of the city. 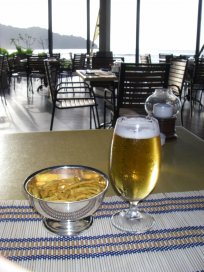 Yes, it is possible to stay much more cheaply in KK than the gorgeous Nexus Resort which has a beautiful 18-hole golf course, a pristine beach, numerous stylish but informal bars and restaurants, and spacious rooms where the dark wooden décor, broad beds and large bathrooms conjure up a more dignified world of refinement and luxury.

But as a guest of the hotel it would have seemed impolite, if not downright stupid, to have opted for a backpacker lodge or cheap hostel in central KK, of which there are plenty. I have happily bunked down in such places before -- but a newspaper under the door in the morning, a massage service, wine lists and a Malaysian buffet in the resort’s elegant Kingfisher Restaurant under cooling fans? It was no contest.

Because of my self-imposed schedule -- I was invited to see the orang utan outside the town of Sandakan an hour’s flight away, and wanted to go to Brunei out of curiosity -- I spent too much time on the move around KK.

But many people do: well organised day trips across the state -- or around KK itself -- are available if time is of the essence, as it is for many. Yet I was astonished how much of Sandakan -- from orang utans to a massive hilltop Chinese temple, around the local water village, lunch at the quaint English Tea House and Restaurant and more -- I saw in a day. The wide streets and craft markets of KK were equally rewarding.

But over a fine tuna steak at Nexus with the ocean breaking beyond the Casuarina trees I wondered if I had made a mistake in my desire to see as much as possible in a short time.

In future if it came to a day with orang utan (one looked uncannily like a guy I went to school with) or spending my time doing damn-all in the pampered environs of the Nexus Resort I know what I’d choose.