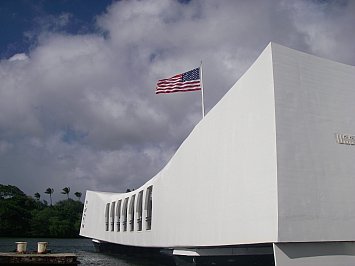 The sky is a perfect and pale comic-book blue, the breeze as warm as a whisper. Palm trees line the white sandy beach, the very image of a Pacific cliché. In the downtown streets before the shops and offices open people make their sleepy, slow way to work.

It is the start to yet another balmy December day in Honolulu.

And on just such a morning, I remind myself as I wait for a taxi, sudden death came to this island.

It was December 7, 1941 -- “a date which will live in infamy,” said President Roosevelt -- when Japanese aircraft attacked the US Pacific fleet moored at nearby Pearl Harbour. They wreaked such destruction a subsequent US enquiry described it as “the greatest military and naval disaster in our nation’s history”.

It is a tragic reflection of our times that military memorials, killing fields, rows of white crosses and tombs to unknown soldiers are so common. And where Australia, New Zealand and countries once stopped at 11am on November 11th to acknowledge Armistice Day, today the hour goes unobserved. Yet war memorials and anniversaries can still give us pause for thought, every Anzac Day seems bigger than the last as a new generation remembers the fallen.

A visit to Pearl Harbour where the wreckage of the USS Arizona lies still visible in the shallow waters beneath a white memorial platform can be a singularly moving experience -- and reminds you that momentous events can arrive with terrible swift suddenness.

“What history teaches us,” says Dr Donald M. Goldstein, professor at the University of Pittsburgh, “is that when you are not prepared it usually happens.”

It happened just like that here in “Pearl”, as the locals call it.

In two hours on that December morning 18 ships were sunk and almost 2400 Americans -- military and civilian -- were killed. Within a day America declared war on Japan, three days later on Japan’s allies Germany and Italy.

The isolationists, prominent among them aviator hero Charles Lindberg, had been proven horribly wrong.

Pearl Harbour is some little way from central Honolulu, yet every year 1.5 million people come to the memorial and visitors’ centre, twice the number the centre expected when it was opened in 1980. Today an urgent fundraising programme is underway to replace the often overcrowded building -- which is also sinking and suffering structural deterioration -- and to create more space to display historic artefacts, documents and personal memorabilia.

Despite the numbers, a visit to the Pearl Harbour floating memorial above the USS Arizona -- partly financed by Elvis Presley’s 1961 concert in Honolulu -- is a quiet one.

Before the short boat trip to the site visitors are shown a brief, impartial film using historic footage which sketches in the lead-up to the attack. It is a catalogue of American un-preparedness: 18 months before the attack the US fleet had been moved here from San Diego as a deterrent to Japanese expansionism; many of the 185 vessels in the harbour that day had been moored side-by-side to protect them from sabotage; when the first wave of over 180 Japanese aircraft swept across the island of Oahu heading for strategic airfields they were thought to be US planes from the mainland . . .

It was also a Sunday morning after a Saturday night when bands had played and many sailors and airmen had been partying in town.

Bugleman Richard Fiske who was on the USS West Virginia speaks of the attractions of Honolulu for servicemen: the ice-cream parlours, the bathing beauties on Waikiki, the beer for 25 cents, and the romantic possibilities of the tropical island.

And so as Pearl Harbour and its people woke up on yet another day in Paradise they were lulled by their surroundings. The extensive bookshop selling DVDs, scholarly texts, posters, maps and replicas of contemporary newspapers doesn’t shy away from these uncomfortable facts. As with the documentary film, there is an admirable honesty to the accounts.

The suddenness of the attack, the consequences for America and the battering the country’s pride took have inescapable contemporary resonance after the events of September 11, 2001. In a curious coincidence, the very morning those attacks happened in New York a group was presenting its finding on exactly how the USS Arizona was sunk at Pearl Harbour.

But historical analysis only tells one part of the Pearl Harbour story, the more affecting aspects are written in the lives of those who were there, the survivors and those who perished.

Tickets to the floating memorial carry on the back a synopsis of the life of someone involved that bright morning: Harry T.L. Pang of Honolulu, the first civilian fire-fighter to receive the Purple Heart, who was gunned down outside a hanger; second lieutenant Ken Marlar Taylor from Oklahoma who received the Distinguished Service Cross for getting his plane airborne, engaged Japanese dive bombers and shot down two . . .

These brief accounts -- and the presence of attack survivors who tell their stories --bring home the humanity amidst the great swathe of history being recounted, and perhaps that explains why visitors observe a respectful silence as the boat makes its way across the still waters to distinctive white memorial.

Since it was dedicated in 1962 more than 40 million people have stepped onto the unadorned platform and gazed down at the rusting hulk of the USS Arizona which burned for two days after the attack and in which many of the 1177 men aboard remain entombed.

“The structure sags in the centre,” said the memorial’s designer Alfred Preis, “but stands strong and vigorous at the ends, [it] expresses initial defeat and ultimate victory. The overall effect is one of serenity. Overtones of sadness have been omitted to permit the individual to contemplate his own personal responses, his innermost feelings.”

That is certainly the effect as visitors look into the shallow blue water or at the names of those killed on the USS Arizona which, when it was launched in 1914, was ironically referred to as “the ship of destiny”.

“When you go to the memorial,” says Daniel Martinez, a historian with the National Park Service, “it’s not so much to relive the horrors of that day, but it’s a place where you can contemplate in silence the events of December 7 and World War II.

“The [people] gaze at the wall and see the names of the 1177 sailors and marines etched in marble and some wonder, ‘Who were they?’ and ‘What did we lose?’ “