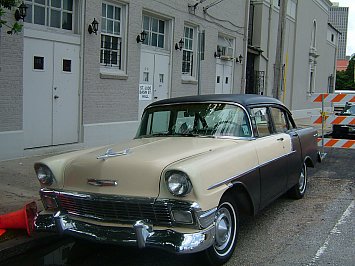 One of the guidebooks we took on a recent drive across America wasn't particularly helpful when it came to scenery. Then again, the Rock'n'Roll Traveler USA was always going to be more interested in directing you the field in which Buddy Holly's plane crashed, and the Taliesyn Ballroom in Tennessee where the Sex Pistols played the second concert of their notorious and short US tour in 78.

It's now a Taco Bell incidentally.

All are interesting places for rock lovers to be sure, but most of them were hardly worth the diversion. But when my wife Megan and I read a rare mention of something as un-hip as "a nice drive" we were immediately besotted.

"Farther south is Jackson, the state capital," it said about Mississippi where we were heading, "connected to Tupelo by the Natchez Trace, one of the nation's loveliest drives".

Well, we were aiming our rental up from New Orleans in Louisiana to Natchez on the banks of the mighty Mississippi. After that we were planning to go on through the Delta and blues country to Tupelo in the north east corner of Mississippi to see the birthplace of Elvis Presley, where our book would surely become more handy.

But this small aside about a lovely drive sounded too tempting to miss. If authors Tim Perry and Ed Glinert -- who pointed you to Madame Marie's boardwalk hut in New Jersey's Asbury Park area (as mentioned in Bruce Springsteen's song Fourth of July) -- thought this a drive worth doing then we were hardly going to argue.

These people had seen a lot of America's highways and must know what they are talking about.

"So, you'all goin' to Tupelo?" says Mike in a small but rowdy bar in Natchez. He's shouting over the basketball commentary on the radio and the dozen or so patrons who are rooting for a hometeam win. I nod as we are joined by his friend Ray carrying more beers.

"Man, you gotta drive the Trace,"he bellows. "Prettiest piece of road in the whole damn country."

It is now mid-evening and we have arrived in Natchez that afternoon. We have driven the quiet streets and at the visitor's centre picked up brochures for some of the stately homes around the town which rest in quiet gardens under dogwoods and oaks dripping with Spanish Moss. It is astonishingly beautiful and Natchez, the oldest permanent settlement on the Mississippi River, is where the cotton plantation owners lived while keeping their properties across the river in Louisiana.

It is cooler up on the Natchez bluff than the low flatlands over the other side and so here are those glorious antebellum homes of the kind familiar from Gone With the Wind. Prior to the Civil War over half the millionaires in the United States lived in Natchez and because the town wasn't a military target most of the 500 homes, churches and public buildings in the Greek Revival style have remained intact. They boast names like Stanton Hall -- five levels of rooms built in 1857 -- and the beautiful but incomplete Longwood which is octagonal and topped by a Moorish-style dome.

"So you'all seen Longwood then?" says Mike. "Terrible tragedy that story, but then again most of them old plantation owners never lived to enjoy the homes they built."

He's right: Haller Nutt who built Longwood picked a bad time to start construction on his enormous six floor structure. Building began on the family mansion in 1860 and the following year the Civil War broke out. Ever the businessman, Nutt tried to play both sides as his builders and craftsmen fled or joined the Northern troops. But when the Union army marched into Natchez they had no sympathy for him even though he had provided comfort for their troops.

They destroyed his stock-piled cotton then valued at over US$1 million. We can only imagine what that might have meant in today's money. Nutt and his family had finished only the basement rooms and that was where he died -- they say of a broken heart although the diagnosis was pneumonia -- three years later.

The owner of Stanton Hall didn't have much better luck. He died in 1859 shortly after his magnificent home was completed. His family remained there for another 35 years, rattling around in a home which boasted six bedrooms on the second floor and has three reception rooms off the 30 metre entrance hallway.

These days many of the old homes of Natchez are administered by the Pilgrimage Garden Club, southern belles who often dress in period costume of layered petticoats and are only too happy to guide visitors around them and tell the stories of the homes' remarkable histories. There is another history in Natchez of course, that of the slaves who worked and died for King Cotton.

The rundown Natchez Museum of Afro-American History and Culture on Main St is the necessary corrective after enjoying the elegance of the mansions. Here in the former post office another, more tragic story unfolds.

The gap between this threadbare museum scraping for donations and the preserved and restored homes of the slave owners speaks of a divide not yet bridged. But in the Corner Bar at Canal and State a conversation about the history of this town doesn't mean much when the hometeam is down a few points.

Mike and Ray can't stop extolling the virtues of the Natchez Trace. Both travel up to Nashville frequently where the Trace ends and most times if they aren't in a hurry they'll drive the Trace, despite the low speed limit imposed.

"Feels like you are just takin' a quiet flight if you travel up that way,"says Mike. "You'all should check it out."

The Natchez Trace is the old French name given to the 800 kilometre trail between Natchez and Nashville in Tennessee and which was first "traced out" by buffalo and then the Indians who began following them around 8000 years ago. It was known to the Chickasaws as "the path of peace" and in their wake came trappers and missionaries.

In 1733 it began appearing on French maps of the region, and on British charts was known as "the path to the Choctaw nation".

By the early 19th century this was the main route home for those up-state traders who had floated their wares downriver to New Orleans but who wisely preferred to undertake this return journey north than battle the treacherous and unpredictable eddies and currents of the Mississippi.

The Trace wasn't without it's own dangers however: it ran through the land belonging to two Indian nations and the forest was home to poisonous snakes, thick swamp and bandits who could quickly appear from the dark trees. It became known as the Devil's Backbone. But as river transport improved the trail was less favoured and Nature took back its own.

A century ago the Natchez Trace had all but disappeared.

Then the local chapter of the Daughters of the American Revolution campaigned to have it reopened and the smooth two-lane highway which follows the old trail was established. And this is where we are headed the following morning with Ray's suggestion ringing in our ears: "Check out the Natchez Indian museum just outside of town before you go, you won't regret it".

The museum, a tiny place which recounts how these sun-worshippers were wiped out with a decade or so of the arrival of European explorers is set near the old burial mounds and fields they tended. It is possessed of a holy silence and afterwards we remain quiet in the car as we head toward the connection with the Trace which briefly runs parallel with the famous Highway 61. And as with the burial ground, the gentle contours and camber of Trace imposes an emotional quietness on us.

The car glides through leafy glades and patches of open grassland, over small bridges which ford glistening streams, through dark almost impenetrable patches of forest. The ribbon of the road stretches lazily around easy curves, the inclines of the highway leaning effortlessly into the countryside.

Beyond the trees are ancient sites and walking trails, Indian burial grounds and Confederate graves, and the remnants of abandoned villages.

History is breathing here. We explore small trails, and later stop to let an armadillo hop across the road in front of us and disappear into the forest. Out there are deer and squirrels as well as copperheads, cottonmouths and rattlers. Later we pull over and do nothing but listen to wind in the trees, watch the grass ripple in the breeze and feel the sense of this vast, unending land stretch out beyond the dark trees on the skyline, beyond our vision, beyond our imagination.

In the early 80s the Sioux writer William Least Heat Moon wrote about the Natchez Trace in his remarkable book Blue Highways: "Now a new road, opening the woods again, went in among redbuds and white blossoms of dogwood, curving about under a cool evergreen cover. For miles no powerlines or billboards. Just tree, rock, water, bush, and road. The new Trace, like a river, follows the natural contours and gave focus to the land; it so brought out the beauty that every road commissioner in the nation should drive the Trace to see that highway does not have to outrage landscape."

We watch clouds brush the blue sky above this Arcadia.

I put aside the maps and brochures we have been given. Nature here is the text, the defining document of this landscape. Its flesh is these low hills, its arteries the low trenches worn into the soil where ancient tribes and buffalo once walked.

Sophisticated Man swishing past in motor vehicles cannot improve on this landscape and so has wisely let it alone and let it be, if nothing else, one of the most beautiful drives in America. We drive in silence.