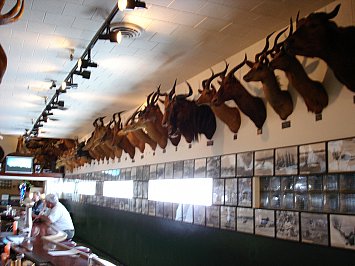 Bill Foster never saw an animal he didn't like. And like so much that he'd shoot it, have it's head chopped off and stuffed, and brought back to his bar in smalltown Rio Vista, halfway between San Francisco and Sacramento.

While most hit Interstate 80 and speed between SanFran's Bay Bridge to California's capital in a couple of hours, there is a more rewarding day-long drive down the older roads.

You can take the time to stop in at places like Bill Foster's Bighorn Saloon, a long bar where the walls are lined with those preserved heads and photos of Bill going about his manly work.

Bill had been a bootlegger and came to this town on the Sacramento River in 1931 to start life anew as a legitimate bar owner after Prohibition ended. He'd become excited by big game when he worked as an apprentice in a factory owned by Henry Snow, a hunter who brought back movies of African wildlife in 1918.

Bill was as enthusiastic about taxidermy and photography as he was about hunting. He made dozens of trips to Africa, Alaska and Canada and recorded his kills faithfully on film, and in the flesh by taking with him some favourite taxidermists. Bill wasn't content with rabbits or even moose.

His bar, with a restaurant out the back, contains the heads of an African elephant (the largest mammal trophy in any collection apparently) and a white rhino alongside zebras, tigers and lions, and even the head and long neck of a giraffe. There are more than 300 wild animals, birds and fish here from every part of the world Bill travelled to.

I couldn't see a vegetarian option.

Bill retired from big game hunting in 1953 and devoted himself to working in the bar that had supported his habit. The elephant head was the last he hung up. He died a decade later but the Bighorn Saloon is his legacy, and is a popular watering hole for hunters and the curious. It's a safe bet you haven't seen anything like it.

Foster's is one of the odder highlights on a more leisurely drive to Sacramento, the first part of which you follow the customary Highway 80 route until the turnoff to Fairfield about halfway along.

By this time freeway driving will have palled considerably so it is time to head down to the Delta. And yes, California has a Delta just like Mississippi.

In fact the Delta land around the Sacramento River was where they filmed Huckleberry Finn. Director Sam Goldwyn claimed it looked "more like the Mississippi than the real thing".

Tiny Rio Vista is the gateway to the California Delta and lies down the road from Fairfield and past Travis Airforce Base where huge cargo planes lumber through the blue sky and the road is lined with ticky-tacky estates for the military and their families. By the time you reach Rio Vista however the new world has dropped away and you are on a single lane on top of the levee where the roofs of houses lie below you on the right and the Mississippi's doppelganger, the winding Sacramento, is to your left.

This is an easy country drive with little traffic and a lot to look at: walnut groves (up ahead is the town of Walnut Grove), jays flitting through the pear trees, and 19th century towns which have been all but abandoned.

After Rio Vista the route runs parallel to the Sacramento and at Isleton (once billing itself as "The Asparagus Capital of the West") you get your first taste of what happens to towns when the folks up and leave.

Isleton is ghostly quiet and the wide Main Street is a line of largely abandoned shops and wooden storefronts. This was once a Chinatown (Hop Fat and Co. is a prominent building) and home to those imported workers who built the levees which keep the floodwaters off the rich surrounding farmland. There is a laughably small "casino".

If you are here in June you'll struggle to find parking however. That's when the town hosts the annual crawfish festival, but other than then you will most likely have the place to yourself.

Further down the route you can cross the river to find Ryde, so small it barely registers but is where actor Lon Chaney Jnr once owned the now-restored Grand Island Inn. Of more interest however is Locke some 15 minutes away.

Built in 1912 by the Chinese workers it is a town which is sliding quietly into oblivion. The battered wooden stores with their peeling paint and fire damage along the side of the road are just the front, the real town lies one street back and below.

Here the two-storey buildings are so aged that they can barely hold themselves upright and many are on a precarious lean. If there are people here they don't wish to make their presence known. All the shops and the small museum were closed when we stopped by early on a weekday afternoon, and a family sitting on their upstairs veranda scuttled back inside when they saw us walking down the dusty and narrow Main Street.

The population of fewer than 70 is invisible and only Al-the-Wop's, the bar, seems to be doing any trade.

A couple of bikers pull up and go inside to quench their thirsts.

One guide book says Locke is becoming a tourist destination full of knick-knack shops but there is no evidence of that. Just shops which have window displays but doors which look like they are seldom opened. A lone dog trots along Main Street.

Locke is a strange, silent place which seems destined to become a ghost town.

Further on the road passes through Courtland, again below the levee and notable for a handsome bank with Greek columns and, presumably, very few customers. Time and haste has passed these places by. This is pear country and it works to slower rhythms, much like the Mississippi Delta to which it bears such a strong resemblance.

It is difficult now, as you wend your way through the deserted roads and watch the Sacramento make its slow, muddy way through the landscape, to believe that once this region was vibrant with life. These sleepy backwaters were served by steamboats packed with those in search of fortunes in gold then, when that proved an illusion, in the more practical opportunities of orchards and farms.

Paddle-wheelers and scows once plied these waters and pulled up at the numerous docks along the route, now mostly used by recreational fishers. Houseboats have replaced schooners.

Today the signs have an ironic and amusing ring to them: who'd have though they be driving through central California and see a sign which could in all truth proclaim "Delta Blues Barn"?

The road meanders easily along the levee then slowly, almost imperceptibly, becomes one with modern America again.

Then there you are, out of tree-lined road and back in the world of wide freeways with motels and fast-food options, of Adopt-A-Highway signs and petrol stations. But by crossing the highway ahead you come in to Sacramento by the back door, through leafy suburbs along 21st Street. Sacramento has crept up on you, not loudly announced itself as it does on the much-travelled Interstate 80, and that make for the perfect end to a pleasant and different drive from San Francisco.

Of course you can also do the trip in reverse. That would mean you could have a late lunch at Foster's Bighorn Saloon, if you can stand the idea of chomping through a beef steak while being watched by a mournful moose, some decapitated deer, and an elephant.