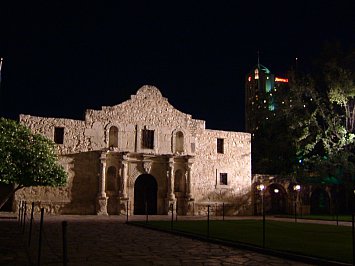 A hot Monday morning and I'm sitting outside of what remains of the old Alamo in the centre of San Antonio, Texas. From here the Crockett Hotel looms above the old mission, and street cars and taxis rumble across land which was once splattered with the blood of hundreds.

Tourists, few of them international if the visitors book can be believed, waddle through the old barracks where the worst of the carnage took place.

"If you'all ask me," says the portly Texan beside me, "they never had a chance anyways. Them walls he'ya is far too low."

He’s right. The battle for the Alamo was a forgone conclusion so any retelling of the story -- and there are many variants -- isn't one of military strategy. It is of the inevitability of a massacre.
And that's why it’s a legend.

Most people my age remember the Alamo. That was where John Wayne, Captain Travis and Jim Bowie (pronounced "Boo-ee" and of some kind of knife fame) fought off hordes of pesky Mexicans in tight trousers and with evil moustaches.

After that I don't remember much except that Wayne (as Davy Crockett, who gave his name to the nearby hotel and a mini-golf course in his home state of Tennessee) died valiantly and the name of the Alamo lives forever as a defining moment of heroism in American folklore.

From our cultural distance the Alamo -- as in "Remember the Alamo" -- probably doesn't mean much. But it has infected popular culture. It's where Pee Wee Herman went to find his missing bike in Pee Wee's Big Adventure, for example.
I remember a Donovan song in the 60s about the Alamo ("A hunnidneighty were challenged by Travis to die, by a line that he drew with sword when the battle was nigh") and at the start of some dissolute 70s tour the Rolling Stones posed there looking like drug-addled buccaneers.

Oh, and Ozzy Osbourne back in the good old days when he was drinking earned the ire of San Antonians. His wife Sharon hid his clothes so he couldn't go out, but Ozzy put on one of her dresses and headed for the nearest bar. But he got caught short so pissed on an old brick wall. It was, unfortunately for him, the historic Alamo.

These are perhaps not the things you are expected to call to mind when asked to "Remember the Alamo".

The recent Billy Bob Thornton movie The Alamo -- in which Thornton plays a convincing and engaging Crockett who owes nothing to the downhome wise-cracking and tight-lipped heroics of John Wayne -- should give the story of the siege by Santa Anna's Mexican army in 1836 a chance to breathe free of some of the more shallow cultural accretions it has acquired.

The story of the Alamo, like that of the British at Dunkirk, is one of military failure turned into moral victory.

In short, a ragtag band of about 180 Texians (as they were then called) holed up in the old mission station and faced down Santa Anna's army of a few thousand for 13 days. They expected and waited for relief that didn't come. Travis' famous letter to other revolutionaries to come and assist them said, "victory or death".

It was never going to be the former, and they all knew it.

Call it heroism or call it folly (it was certainly a measure of both), the actions of those men inside the walls who knew they were going to die has been distilled into the spirit of Texans. It's less commonly known however that they weren't there to fight for America against Mexico, but for the independent Republic of Texas (which lasted almost a decade before Texas became a state).

All this -- and the bickering between Travis and the boozy, sick Bowie, the aftermath when that catchphrase was on the lips of their avengers, and the defeat of Santa Anna who was a treaty-breaking dictator and self-styled "Napoleon of the West" -- is in the new movie. But neither that nor the Imax version around the corner from the old mission prepares you for the actual battle site itself.

The remaining Alamo buildings -- much like Elvis' Graceland -- are surprisingly small. Their mythic stature has enlarged them in the popular imagination.

The whole Alamo site no longer exists of course; progress took care of that. What remains is the old mission (nope, there's no basement so Pee Wee's bike couldn't have been there) and the long barrack which is now a fascinating museum. The old outer wall and compound are long gone. But they were just that, a low wall and a big empty bit the size of a football field.

When Santa Anna's troops scaled that outer wall in the early hours of March 6 after almost a fortnight of assault and attrition the rest was just a slaughter. They easily vaulted the lower inner wall and the barracks became a blood-splattered charnel house as the Mexicans, ordered to kill everyone, fought their way by bayonet, musket and knife through the narrow corridor.

It's an eerie thought so many men died here where tourists now walk chatting on cellphones and sucking water bottles.

But the museum in the barracks doesn't shy away from uncomfortable truths about the Alamo, notably that Travis might just have been a wrongheaded, arrogant cuss for a start.
He had abandoned his wife and children (which is in the current movie but not in many other versions) and was only 26. The famous Jim Bowie who died on his bed was an equally flawed "hero". He had made his fortune in slave-smuggling with the Gulf Coast pirate Jean Lafitte. And it wasn't Jim who gave his name to that knife but his brother Rezin, a real nasty bastard according to contemporary accounts on display in the gift shop.

Of the defenders, very few were professional soldiers. Among their ranks were doctors, lawyers, settlers, opportunists and Micajah Autry from North Carolina whose occupation was listed as "poet".

Crockett is the most interesting figure. A fiddle-playing, former senator from Tennessee, he had been rejected by his constituency the previous year. According to what this reluctant hero and storyteller told his gathered comrades in the Alamo, he had left his ungrateful voters with the ringing phrase: "They might all go to hell, and I would go to Texas."

For him they turned out to be the same place.

The Billy Bob film, which controversially follows a Mexican soldier's version of events, shows Crockett captured and executed. Traditionalists have cried foul and that heroic David (as he preferred to be known) would never have allowed himself to be taken.

He isn't in the John Wayne or Imax versions.
Well, maybe he was and maybe he wasn't, but Thornton makes him the most watchable character in an otherwise plodding film which went straight to video in New Zealand.

We here don't know or care about, let alone remember, the Alamo.

But the story of the Alamo is one of foolishness, idealism, heroism, politics and brutality. And the old stone building -- just above the romantic Riverwalk in San Antonio with its Tex-Mex restaurants, galleries, Hard Rock Cafe and sports bars -- is where it all happened. It attracts tens of thousands every day in summer and locals will tell you it is one of the most popular tourist sites in the country.

Separating the myth and merchandising from the actual story with all its nuances and nasty politics can be difficult in this tourist mecca. But it is worth the effort to sit quietly and try to assimilate it all.

The Alamo is where legend, tragedy, blood and a fighting spirit were distilled in the crucible of history.

But if your head hurts with all that thinkin' you can simply go to the gift shop and buy a ballpoint pen shaped like Crockett's long rifle, a coonskin Crockett cap, some of the dozens of Alamo caps and t-shirts, the tie with the Texas flag on it, the fridge-magnet Alamo thermometer, the dress-up Davy doll . . .

Then you can head for the Imax and see The Alamo: Price of Freedom, or go to the hilariously bad wax museum across Alamo Plaza for the tableau.

Remember the Alamo? There are San Antonio folk determined that Americans not only never forget, but buy up merchandising detritus to make the Alamo a mundane part of their everyday lives.