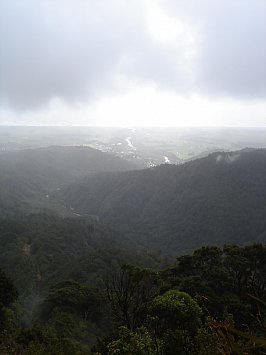 The weather was perfect: fiercely cold, low mist and a chilling drizzle. This is ideal when you are at Denniston, because only in such miserable conditions can you get some small appreciation of what life must have been like here a century ago.

At 600 metres above sea level and with the coast barely visible through the rolling mist, this former coal mining town in the hills above Westport is a wretched place on this winter’s day. Just driving up here has made us weary, and yet generations once lived in Denniston where there were schools, churches, a hospital and pubs.

The earliest inhabitants, miners working for the Westport Colliery Company who arrived in the late 1870s, had to anchor their rude dwellings with wire to prevent them from blowing off the hillside.

I pull my beanie down over my ears, shove my hands deep in the pockets of my thick jacket, and walk to the edge of the mountain where the old railway incline cuts its way through the bush. Other than the wind whipping through the trees it is quiet here. There are now only the ruins of what was once the hub of an industry which provided some of the best coal in the world for the fires of steam engines which drove huge ships.

Today so little is left of the thriving township it is hard to imagine people living here. Nothing grew up so all food as well as building materials, household supplies and mining equipment had to be dragged up the notorious incline or along the rugged Denniston Track.

People made their way down the same way, but many simply didn't bother. They just stayed in Denniston for years and sometimes decades. Getting out and back was too much trouble, and on the wet West Coast it wasn't a comfortable journey most days.

We have been drawn to this bleak place by Jenny Pattrick's best selling novels set here during the 1880s. In the first book of that trilogy, Denniston Rose, Pattrick evokes the character of this town with grim accuracy.

"There was a saying that every living soul on the Hill had been chased up there -- by the law or some other fury; that they escaped onto that desolate plateau and then somehow mutated, like a tough breed of goats, into a race that actually enjoyed mist and cold and isolation."

The merciless wind whips around me and sheets of mist rise up the mountainside over dense, dark brown bush.

Denniston -- now with only the steel skeletons of mine equipment left to rust in isolation -- is a place I was glad I had come to, but I was even happier to leave.

We head back down to Westport for a hot meal at the Denniston Dog Saloon and an amble around the Coaltown Museum. History can still be appreciated on a full stomach and under shelter.

The more I travel this country the more I see its history being unearthed and presented with pride. Small towns have local museums, usually manned by volunteers, and people take pleasure in seeing the stories of their predecessors told.

Like much of the West Coast, the once-thriving town of Westport is a place which progress forgot for decades.

If there is an upside to this -- and you do need to remember the other truth: a decline in the local economy, people moving out to find work, families splitting up -- it is that for many decades from the Thirties there was no money around to tear down old buildings and replace them with something contemporary.

And so in Westport solid stone buildings line the optimistically wide streets. Even the laundromat is in a building that we Aucklanders -- who have witnessed the relentless demolition of our city -- stop to photograph.

The Coaltown Museum showcases the dramatic story of the rise and fall of Westport and satellite towns like Denniston. A film on a loop tape tells of the hardships miners endured. With an almost casual indifference we are told of the signals if there was a cave-in: five whistle blows meant grab the medical bag and hurry; six meant take your time, he's dead already.

The museum is fascinating for it trivia as much as for the massive dredge engine which rattles the walls of the building when it kicks into wheezing life. I delight in an old La Gloria gramophone exactly like the one my parents had, the figurines carved in coal, the old treadle sewing machines and the historic photographs.

But something else catches my attention: the ruin of an oddly shaped flatbed truck which looks like it was built out of spare parts. It is the famous Duzgo -- think about how you should pronounce that -- which was designed and built by Kevin and Rodney Giles at Whataroa near Hokitika. It looks like something unearthed from the Thirties but the brothers made 10 of these in the Seventies. It is a peculiar mongrel -- testament to the fabled Kiwi ingenuity -- which was originally designed as farm vehicle but proved useful in deer recovery. The punchline however is as funny as the vehicle itself: they wound up the company in 1984 after a sales tax dispute with the IRD.

I guess that's another aspect of the independent West Coast character.

But it is in another room where a huge coal cart is poised on a mock-up of that terrifying incline at Denniston that my mind goes back to that hill. I would never want to ride in one up or down that steep hillside, nor walk the Track.

No wonder some people preferred to stay in Denniston, despite the discomforts.

There is a piece of popular doggerel about Denniston which makes even more sense once you have seen the place:

Damn the way both there and back.

Damn the wind and damn the weather.

I read your article with interest, I was brought up in Greymouth, which is south of Denniston. My father is one of about 10 surviving coalface miners in NZ. He worked in Dobson, Rewanui and Strongman mines.He often talks about the bleakness of the coalmining towns and locations but he said there was also a special bond, a cameraderie amongst the miners.They worked hard and drank hard and fought hard. he told me when they came out of the mine, a bus would be waiting for them and after 10 mins the bus would stop at the Rapahoe hotel and the whole bar counter would be lined up with full pint glasses of beer. The barmaids would be standing behind the bar.They would drink their beed... back into the bus to be delivered home.
he told me lots of stories.. all interesting. Sometimes he would bring home a half gallon bottle of oil he got from down the mine.,. or a fossil of some shell or fernleaf.. or he would bring a "chucky".a white marble beach stone, which indicates that once these coalfilled mountains were once under the sea. I enjoyed your post

My father was also a coal face miner and i was born on denniston we lived there until about 1962 i too remmber the stories, my dad has passed away long since but my mum is still alive . Its sad to think that an era is gone but also good to see that people still remmber.


I remember as a School girl going to play Hockey in Denniston about 1953-4.
What an experience! The field was so enshrouded by mist you could hardly see the hockey ball. The field was carved from stone and you fell over with dire consequences.I nearly took my knee cap off.
My father had lived there as a boy and had some hair raising stories about the tough old identities.
An amazing place with such interesting history.