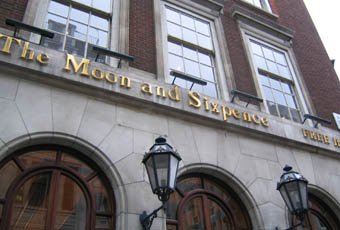 The Moon and the Sixpence in Wardour St is much like many pubs in London these days. Whatever genuine historical features it might have had have been air-brushed in a sanitising make-over.

The artists, poets and musicians whose portraits are framed on the walls may, or may not, have some connection with the area, and the pub menu is almost identical to that of most others. You have to look long and hard for a genuine, dusty and character-filled London pub these days.

The Moon and the Sixpence is a place with the semblance of a past but little sense of presence.

However at first sight it looks like and interesting old place and so that was where my son and I ended up for lunch: a steak sandwich with chips prepared by an Italian guy, beer served by two young Scandinavians exuding an unnatural aura of health in a place where smoking seemed obligatory.

Cymon and I sat with our beers and, over the noise of a pokie machine and traffic from the street outside, swapped London stories. He had been living there for almost a year and I had first seen the city at 18, yet despite the chasm of three decades we came to similar conclusions about the city: that little here -- like the pub, named for the Somerset Maugham short story -- is as it first seems.

As we chatted this opinion was reinforced by two patrons: one a well groomed gentleman in an expensive Burberry coat, the other a bent and dishevelled old man who chainsmoked over his plate of fried fish and drank glass after glass of Strongbow cider.

As the afternoon progressed I noticed the gentleman in the Burberry starting to pace the room muttering to himself, pulling his lips back over his teeth and occasionally shaking his head violently.

Initially I had taken him for a barrister on a lunchbreak or Someone In The City but increasingly it was clear that he was a nutter, albeit a very well dressed one.

And the old man who appeared to have pulled himself out from under a bridge?

In the late afternoon he pulled one of those expensive personal computers-cum-phones from his pocket, appeared to check his e-mails, tapped out a few messages and was then met by a dapper gent in a three-piece suit who clearly was Someone In The City and then they took their leave.

We did too -- bemused again by London’s consistent ability to confound expectation and upset preconceptions. 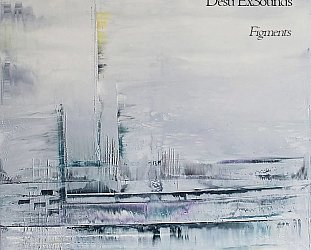 Naviar Records out of London is certainly interesting in its ethos, it speaks of exploring the connection between contemporary experimental electronica and Japanese haiku. It seems to be a... > Read more