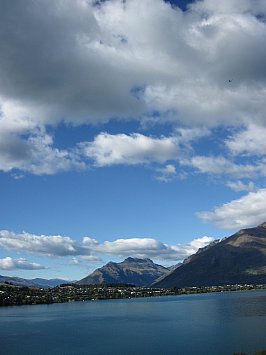 Nine months ago my life wasn't like this. Everything was different.

Then, the hard white sun would melt the early morning cool and the air would thicken with the smell of decaying jungle vegetation. On the cracked pavement of the town's only main street women would squat in doorways avoiding the equatorial heat as they sold their meagre produce.

Men walked aimlessly in the alleys, and in the market would fill their empty days by gambling for tiny sums.

A rusting steamer at the wharf attracted a curious few, so did a sick dog beside a pile of rubbish in a sun-bleached backstreet.

Some days there would be no water, most days the power would go off. In my fetid, cheap motel room -- the mattress covered by two worn sheets and what looked like an old tablecloth -- the air would solidify and I'd be gasping for breath. The brown fungal walls sweated.

At dusk people in the dusty town would rake rubbish into piles and set them alight. The humid air filled with a smoky haze and the acrid stench of burning plastic. Ash would drift in shades of grey across the blue sky. It blurred the horizon beyond the palm trees where the ocean, often a shimmering azure by day, would gradually seep into the impenetrable black of darkness.

But that was nine months ago, and in a necklace of tropical islands in the West Pacific which were sliding into the endless night of uncertainty and random violence.

For two weeks -- with photographer Alan Gibson -- I endured the heat and dust of Honiara, the capital of the Solomon Islands. Then we returned home, for me to write of conversations with broken men on broken streets.

I tried to tell of the debilitating corruption, and what the end of hope can feel like. Of young men who looked at the horizon every day and wondered what might lie beyond. It was a world of failed dreams, and worse.

It was a place where dreaming had ceased.

The irony is that what I wrote about there has brought me here, to this place where everything is different.

My partner and I are now by the lake in impossibly picturesque Queenstown in New Zealand's South Island. The nearby hills have an icing-sugar dust of snow on their smooth sides. Beyond, black mountains rise to razor-edged whitened points which pierce the low cloud. Tourists with albatross-like cameras around their necks and brand-heavy trainers walk the lakeside. They fill the restaurants with careless laughter. Rooms are warmed by friendships, relaxation runs through the town like an epidemic.

Outside it is cold, the air clear. This is a safe world, for us one of comfort and pampering.

These new days are saturated in that disconcerting irony: my reward for writing well about the poverty, gun culture and dazed lives of people in the Solomons is a complimentary weekend in one of the Small Luxury Hotels of the World, the elegant Eichardt's on the shore of Lake Wakatipu.

This, my partner says, is the physics of feature writing: for every story there is an equal and opposite story.

From the balcony of our room -- or more correctly rooms -- we have a view across the motionless lake.

A possum-fur rug is thrown across a bed the size of an aircraft carrier, and our private lounge has an open fire. There is a CD selection available, complimentary cocktails before dinner, and a dozen channels on the television.

The decor in these renovated rooms in the historic white building on Marine Parade is a subtle blend of beige and pale chocolate. There is real art on the walls, antiques in the hallway, and recessed floor-level lighting comes on in the large bathroom at night.

Eichardt's was built brick-by-brick in 1866, served time as a tavern and boarding house, then was extensively renovated in 2001 as one of the few exclusive luxury hotels in the country. It has been winning awards ever since.

A couple of television types have been recent guests in one the five suites, so have top people from the Financial Times and Forbes, and any number of writers for high-end travel magazines and tourism companies.

At something like $1200 a night, the luxury life probably doesn't come much more luxurious.

Everything here feels soft and inviting. Deserved even.

On the first afternoon I stretch out on the recliner with a drink from the minibar and watch the news.

And there it is. That tragic country.

One brief image and I am back there, the layers of luxury dropping away. I am mesmerised. The journalist is standing on a street I recognise and talking of New Zealand soldiers who have come to put order into this chaotic land.

There's a gung-ho quality about the broadcast which I find transparent. It suggests the endgame, a redemption at hand, a complex situation distilled to comforting soundbites. I have no doubt what is being said is true, a lot of things about the Solomons are. Especially the lies.

In the midst of comfort I have a feeling of unease, like something is about to happen. I scan the channels to see if there is more.

The following morning Queenstown yawns and stretches under a cloudless sky. We drive around the mountain and point a camera at high peaks with each other in the foreground. We run into thick mud on the way to a place called Paradise. So we spin the rental around, turn up the heater and head along another slushy road between the towering peaks. We drive past farms of delicate deer and huge cattle, and stop to admire a handsome 10-point stag which watches us nervously from behind the wire fencing.

As the sun slides behind the mountain range the air starts to bite. On the drive back to the open fire in our sumptuous hotel I am somewhere in the Solomons again: thinking of the generous people I met on the island of Malaita; of the crazy man released from the asylum because there was no one to look after it anymore; of being invited to a wedding feast in a small village; of kids playing with the balloons I would give them.

And of White River, a scrappy market of half a dozen tables where women sell betel nut, bananas and coconuts to no one. It is only 10 minutes out of Honiara, but is the limit of safe passage. I remember young guys with hooded eyes beneath their blood red bandannas surrounding me and accepting the offer of cigarettes in menacing, sullen silence.

Nosing the car into the lakeside parking lot under an empty sky I feel uneasy again.

The following day we drive to Glenorchy and the start of the Routeburn Track where vivid moss is soaked by a steady cold rain. We breathe deep in chilly air, watch as hawk circles silently beneath low-slung clouds. And so our day goes by: still, quiet, safe.

That night, walking after dinner beneath the invisible peaks, there is an endless black canopy above spotted with stars. Couples stroll glove-in-glove, the night feels secure and silent. In our room is a complementary bottle of port, vintage cheeses, dried figs and apricots, and paper thin crackers laid out on the bedside table.

I open the port and watch the late news. And I am taken back again.

Stories of refugees from the Weathercoast where mad Harold Keke has been on a killing spree. I am remembering: the bullet holes in the car; the taxi driver and his drunken, armed passenger; the afternoon laughing teenage soldiers headed off to the Weathercoast in a small boat, drinking beer. Some never returned.

That night as I am drifting into sleep there is laughter from the street below. A woman is saying something I cannot decipher through my drowsiness. I drag her into my dream. She is shouting now, the truck has overturned and I am aware of the shooting.

I am at White River. There is gunfire around me, the woman is screaming, children are huddled wide-eyed beneath the broken tables in the mud and the rebel boys are shooting at nothing in particular. I run across the road as bullets crack into the white walls of the bridge. Coins of concrete fly through the air. A convoy rumbles through.

I slide down the bank to the river and scramble under the bridge. An unknown man I have seen before is there, he puts his fingers to his lips to silence me then moves off, disappearing down the rocky riverbed. I climb up the other side and am in a house of dark rooms filled with trees. A woman is standing in a a doorway surrounded by flames. A siren is screaming.

I wake with a start and above the silent streets of Queenstown is the wail of the volunteer fire-brigade siren.

I slide out of bed, my feet on the warm possum-fur rug which has fallen to the floor, and walk to the bathroom with its gleaming mirrors and bottles of body lotion.

I wash my face and take a glass of water. My hands are shaking.

And I am in one of the small luxury hotels of the world. 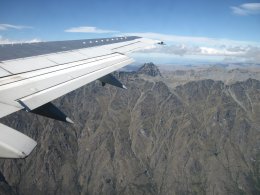 That afternoon we are winging our way above the blue marble lake. It looks unnaturally silent.

This world is secure and reassuring.

There are no surprises here, no sudden movement in the bushes, no unfamiliar sounds by night.

The strands of cloud move slow, the air is clean, the watery sun brings a gentle warmth.

Down there are tidy townships where there is power and water and predictability.

And a place called Paradise.

These are very different days.

The following morning I am back at work. That afternoon in the office there is talk of me returning to the Solomons.