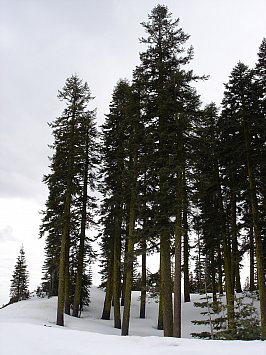 Sonny -- that's what the big bellowing men called him -- runs a restaurant in Klamath Falls, a town in central Oregon halfway between San Francisco and Portland. His place, the Dynasty, boasts "authentic Chinese food". Sonny is from Taiwan.

This town was originally called Linkville, but a century or so ago the locals decided they wanted a more dramatic name for their home on the edge of the Upper Klamath Lake. So they named it after the waterfall nearby.

Regrettably, damming and changes of water courses means that today there are no falls in Klamath Falls, dramatic or otherwise. I guessed, wrongly as it turned out, as I wandered its quiet streets that other kinds of drama here had also now passed the town by.

A century and a half ago you had to be tough to live in a frontier town like this. Local history records that fistfights were as much part of the entertainment as theatres, saloons and brothels. Back then this town was clearly a much more interesting -- and yes, dramatic -- town than it is today.

Klamath Falls today is within an easy drive of beautiful Crater Lake National Park so the small airport is busy bringing in tourists and trampers, and Sonny's place on the southern entry does a good trade with people coming up from California just across the state line.

The petite and nervous woman from India in the motel near Sonny's recommended it to me when I asked if there was a place nearby where I could just have a drink and quietly read the papers.

And that's what I was doing at Sonny's when the Big Bellowing Men arrived.

"Lotsa shrimp, big jumbo prawns and not too hot," one demands with a rafter-shaking boom as he took his place in the bar, a room beside the family-styled restaurant.

"No, no. Hot, but not hot-hot," says Sonny taking their orders then racing off to the kitchen.

The Big Bellowing Men settle in for the night, ordering beers and shooters as Sonny brings plates of steaming food and waits patiently behind the bar while they eat, yell into cellphones and bellow at each other.

"Man, she likes you and she ain't nast-ee. Marty knows some nast-ee women, but she ain't one."

Sonny stands behind his bar waiting, listening to all this.

"I can't remember what I said to her, but she liked my package."

"You think I'm gonna put up with that shit from him? He may be family but I'm takin' him down, man."

This goes on for half an hour, Sonny sometimes jumping to get more beers or fill

another shot glass. I sit further down the bar reading about what a volatile little town this used to be.

"And you know what, why don't you get me a barbecue pork pack with hot mustard and some fries to go?"

Sonny runs off to the kitchen again.

In a rare silence I am spotted and invited to sit with the Big Bellowing Men and we chat as they pack away dozens of prawns, plates of sliced beef and mushrooms, and fish pieces with fried rice.

I ask one of the guys with arms like torpedos what they are doing in town.

The reason for their appetites and high spirits is because they've been invited down by some local farmers to shoot on their spreads. They'll shoot tomorrow, drink some beer and party tomorrow night, then drive back home to Portland on Sunday.

Torpedo Man has a handshake that can crush iron, and another of the Big Bellowing Men can barely hear and has to cup his hand over one ear. He did two tours of duty in Vietnam based in Danang. I have been there so we have a bit to talk about.

Another guy, Deaf-Vet's brother as it turns out, tells me his son is just back from Iraq but has signed on for another tour.

One of the other guys -- big, but a Non-Bellowing Man -- just sits silent, looking into his stir-fry and coffee cup.

"He's all right," whispers Torpedo Man. "But don't give him no trouble."

I deliberately avoid eye contact so as not to give him no trouble. Later, when I offer to pay for the coffees we've ordered from an increasingly nervous Sonny, the Silent One looks at me, says nothing for a while, then mutters, "I think I'll pay for my own. If it's all right with you."

The way he measures out his words with what seems like calculated menace suggests it might be unwise to take this personally.

But Torpedo Man is in a chatty mood and tells me he works in a factory on the Columbia River. I guess it to be one of those hellfire places belching fumes I have seen a few days before. We talk about politics for a bit -- I second-guess their view on Iraq -- and about how beautiful the country is around here.

A table of slight and obviously uncomfortable Indian men having dinner in the corner and who are staying at my motel, relatives of the owners, have tolerated the noise for long enough and leave, hoping not to draw attention to themselves.

A guy built like an oak comes in with his wife and takes a seat further down the bar.

Sonny comes back and serves them. Then he serves the Big Bellowing Men again, then me. Perspiration is visible on his brow and upper lip.

I go to the bathroom and when I come back shouting has started.

Sonny, the top of his head barely reaching Oakman's chest, is standing between him and the Big Bellowing Men trying to restrain him. Oakman shouts curses and threats.

For some reason -- beer and brandy chasers perhaps -- I try to interpose my body too and also think this is an opportune time to ask a sweating Sonny which part of Taiwan he is from. The room is swimming, Oakman barely knows Sonny and I are there trying to restrain him. He shouts and curses over our heads.

The Big Bellowing Men don't move from their stools which probably prevents things from exploding. Sonny and Oakman's wife hustle him out the door amidst more curses and threats.

I rejoin the Big Bellowing Men who laugh and resume their drinking.

"Hey Sonny, you should've done your kung-fu on him," says one of the Big Bellowing Men to a sweating Sonny as he lurches back into the bar.

Sonny says tightly that he doesn't know kung-fu and takes his place behind the bar waiting to serve them more drinks.

But they are done. They pay and tip heavily.

As they are leaving I ask Torpedo Man about their weekend. I laugh when he tells me what he has come down country to shoot. When he eyeballs me I realise he is serious.

I had assumed they would be after something they could hunt’n’shoot then sling across the bonnet, something so huge its antlers would drag on the road as they drove down to the local bar and spent the night bragging over beers. A beast worthy of their masculine energy and kill-power.

But no. Torpedo Man patiently explains that in cattle country their prey are pests. I nod knowingly, but can feel the Silent One's eyes boring into me.

I meekly change the subject and say something to the effect that it is a good time to be out of the city and the forecast is for clear skies the next few days. Should be great. Hope you have a good weekend.

But big bellowing men with guns and camouflage jackets? Among them a Vietnam vet, a steel worker, and a menacingly silent man?

I wave them and their take-out in Styrofoam packets goodbye, and wish them luck on the squirrel shoot.

I wait and speak with Sonny briefly about Taiwan where I once spent some time.

He tells me Oakman comes in often.

"He bad trouble all time."

I leave. The night is crisp, a light rain is falling, the sky is a starless canopy.

I walk around the block to clear my head.

On the way to the motel I see Sonny, standing outside the back of his "authentic Chinese food" restaurant by the rubbish skips, quietly smoking a cigarette by himself.

He is looking up into the black of another night in Oregon.